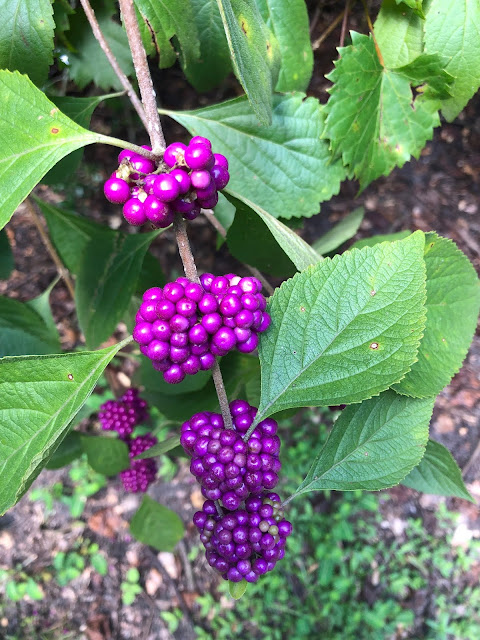 The beauty berries are in their full glory again. I am not planning on using any for jelly this year as I did last. It was a noble experiment but we haven't eaten half of last year's jars yet. In the spirit of getting-rid-of and cleaning out, I should probably just dump that stuff and reuse the jars.

It's nice having my husband home again. He was so very, very tired. He slept almost twelve hours last night which is absolutely unheard of for him. He was amazed when he got up. And pleased, too, I think.

I had a strange experience in the night although he slept right through it and missed it. Jack was in the bed with me, cuddled up as he so often is, and Maurice came into the room. She made a big fuss of sharpening her claws on the part of the mattress that she can reach from the floor. She always does this before she jumps on the bed but last night she must have known that Jack was already on the bed and instead of making that leap, she started to vocalize. She was making her usual bitchy yowls and one of the sounds she was making sounded a little like "mer". Not so strange. Cats sometimes say "merawl" or something like that but it was close enough to "mer" in this case that I thought, "Wouldn't it be funny if she said, "MerMer"?
And then she did.
Clear and crisp as the first true day of fall. "MerMer!"
Y'all, I am not making this up. And I was wide awake at this point because of her enthusiastic mattress scratching.
I made an amazed face right there in the dark and said, "Kitty?" and she ran out of the room.
I reached over to see if my husband was awake and had heard this but he was sleeping like a rock. I was tempted to wake him, but didn't. I checked the time and it was a little after two.
It took me a few minutes to get back to sleep. I truly was astounded. Have any of y'all ever heard a cat speak English?
I know that most of you are going to think I've truly turned the bend onto Crazy Lane but I've known several people who have heard cats speak. I'm one of them, having heard two different cats say things in human before. And let's face it- Maurice is an odd cat. I've never had a cat before that kissed me on my lips but she does. And no, she's not licking my lips with her emory-board tongue. She's kissing them with hers.

Okay. I'll quit talking about that now. But. I am not making this up.

I got a few things done today. The peas I'd shelled are blanched, bagged, and in the freezer. That didn't take long at all. Then I decided I'd pickle some more peppers but then I started looking at recipes and pepper jam came up and I thought...well, why not?
I do love a good pepper jam with cream cheese or goat cheese on crackers. Either one. And I had so many peppers, some of them plain banana peppers and some the hot ones. I figured I'd just use them all and see what happened. 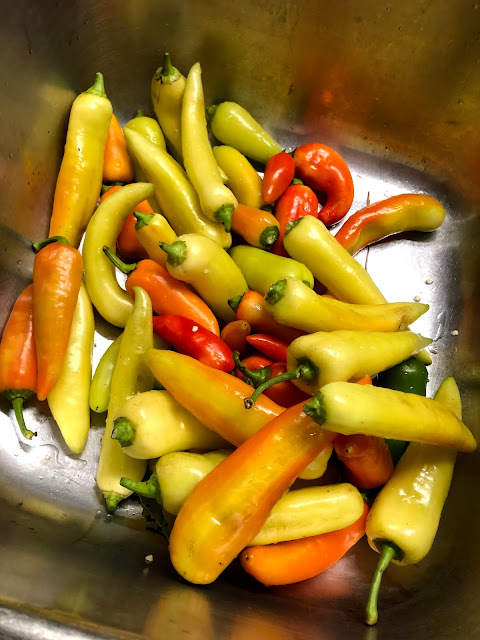 I cut the stem ends off and seeded them, then cut them into smaller pieces and put those through the food processor. I got eight cups of those. I cooked all of that with vinegar, sugar, a tiny bit of salt, a little butter (which is what the recipe I was using called for) and also two nectarines and a large apple. I boiled it all down for awhile and it thickened up nicely. I got eight half-pint jars filled and it's quite tasty. I used a bit of one of the red flame peppers to bring the heat factor up and I think that worked well. 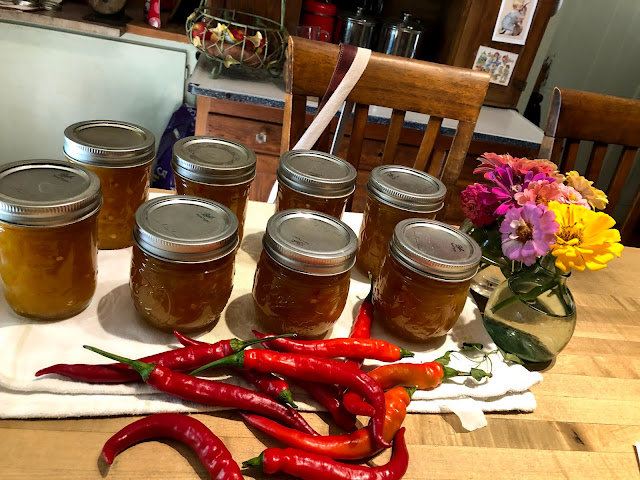 I believe I'll start stringing the rest of those red flames for drying.
Mr. Moon's gone to get tested for Covid and plans on getting tested again next week. He's so afraid of having gotten the virus and spreading it to the kids. And to me. He's also got an appointment for a booster shot next Tuesday which he qualifies for due to his neurological situation. So that's all good. He's acting out of an abundance of caution as we so quickly learned to say last year but in this case, it's also just good sense. God only knows what he was exposed to on his trip.
And that's about it. Well, Maggie got a gold star today and Gibson got the highest score in his class on a reading test so HURRAY FOR THEM! And Jessie got notice of two more children in August's school coming down with Covid and took August out of school at least until after Labor Day.
All of this is putting parents in an impossible situation.
And finally, all of the pups that Jessie's been fostering have found homes. Here are the boys with the last one to leave. 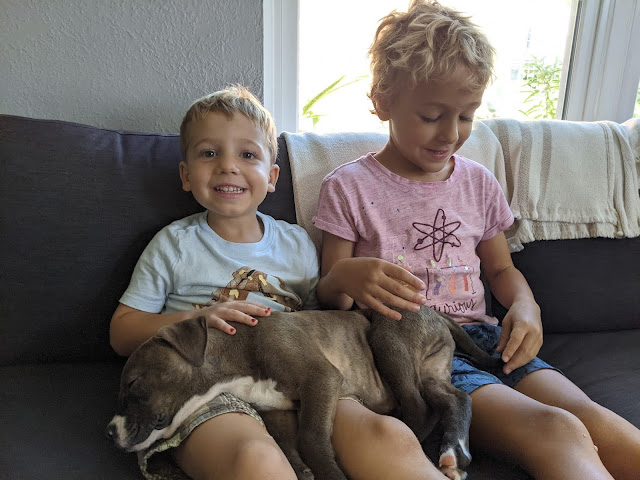 I can't believe how much those little doggies have grown in such a short time.
And that is that. And here we are. Life going on all around us, within us, above us and below us. Some of it normal, some of it- well- not.
Keep using an abundance of caution and be safe. There are so many precious people who depend on that, you being one of them.
Love...Ms. Moon
Posted by Ms. Moon at 6:18 PM