A Kiss From Your Lips. An Eye For An Eye 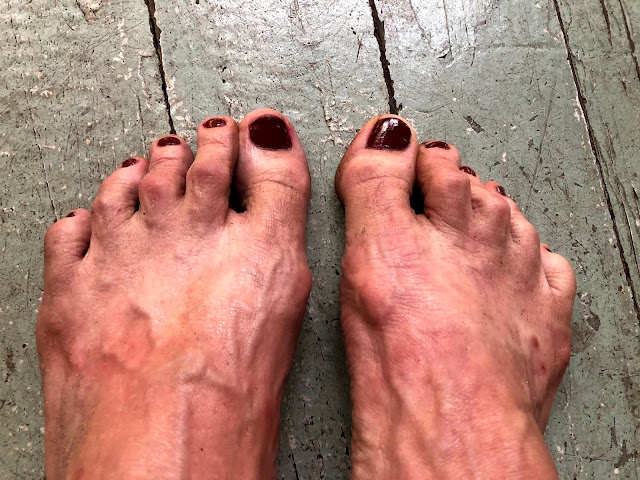 It's been a different sort of day. The Weatherfords came out and Mr. Moon and Vergil and August and Levon took off for the woods to set up the deer feeders and hang trail cams and I don't know what all while Jessie and I, with free time on our hands that we hardly knew what to do with, decided to watch something on the TV that was neither child nor man approved. And so we did!
We went through the menus for awhile and settled on something completely ridiculous and absolutely fun.
Magic Mike, XXL.

We had seen the original movie years ago when it was in the theater. We went with our dear Liz (not to be confused with Lis) and some other lady friends and somehow the only seats available were on the front row and it was just a hoot. Jessie thinks she'd seen the XXL version too but wasn't sure. I knew I hadn't. So what the hell?
AND, to make it purely heavenly, she gave me a pedicure while we watched.
Am I the luckiest woman in the world or what?
So the feet you're seeing up there may look ant-bit and old and Lloyd-dirt-stained (and they are) but they look brand new compared to what they looked like before she started.
We got to watch all but the last twenty minutes of the movie and it was just terrible. But in a good way. At one point I said, "It's like they ad-libbed this entire movie."
And not very well, either.
But hey! Pretty bodies. Pret-ty, pret-ty bodies.
And then Jessie got a call from Vergil and he needed her to meet them at Lily's house with a battery (don't ask me) and so she's gone and I've started tonight's supper which is chicken and dumplings because that's what August said he wanted as they are spending the night. They were pretty excited about that. Levon told me, "I can't wait to have a date night!"
So yes, we're having a date night with August and Levon with chicken and dumplings and either purple cows or coconut cream pie according to their desires and wishes.

And hopefully, Jessie and Vergil will have a date night too. I'm sure they need one. We haven't had the boys spend the night since we were in North Carolina.

And yes, today is the twentieth anniversary of 9/11 as we all know. And yes, I remember exactly where I was and so do you.
So do you.

There's so much one could say about that day and the aftermath but I think this song says more than I ever could.
We will never not be haunted.
Love...Ms. Moon
Posted by Ms. Moon at 5:49 PM