If You're Living On The Edge, You're Taking Up Too Much Space (Words of Wisdom From A Guy Sitting At The Bar Of The Ocean Grill As He Was Awaiting A Margarita) 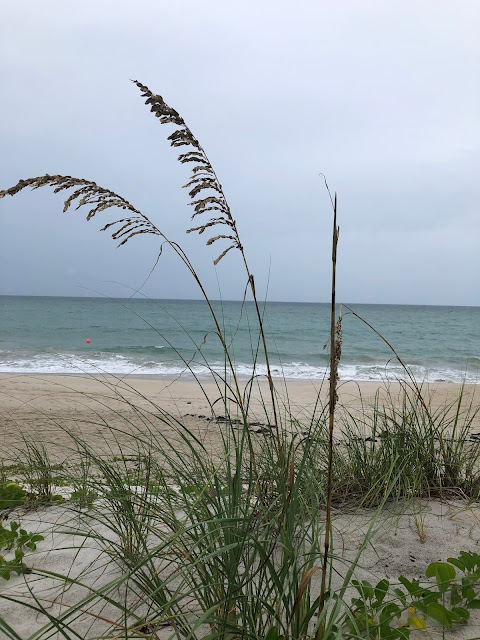 We did indeed make it to the Atlantic today. However, we neither went swimming nor even walked on the beach. What we did do was dine beside it.

I cannot possibly imagine a trip to Indian River County without going to the Ocean Grill. Lord knows how many times I've talked about it here. The first time I went there, if I am remembering correctly, was on a Mother's Day sometime back in the early sixties. The restaurant was built in 1941 by the strange and eccentric Waldo Sexton and by god, I wish I could have met the man. Much of Vero still holds his fingerprints. If you see something that is old and very funky and adorned with strange and antique and beautiful things, you're most likely looking at some of Waldo's work. Here's one of the dining rooms in the Grill. 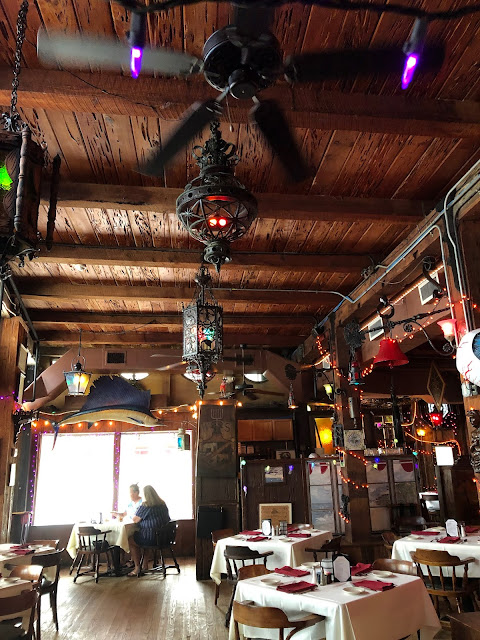 It was built rather too close to the ocean and has been through who-knows how many hurricanes but still it stands, refurbished and rebuilt many times, but always and eternally smelling of cypress and other woods, the ocean, salt, delicious food and some ineffable scent that belongs only to it.
It's an old fashioned restaurant. There's very little of trendy food at the Ocean Grill although I did see there is a Beyond Burger now being offered. But mostly there is seafood, steaks, chicken, salads. You know. And the world's best Roquefort dressing. Not blue cheese, you infidels! Roquefort! The servers are perfect in all regard. They are attentive but never hover. If you ask for lemons, you will be getting lemons. If your drink needs refreshing, they will refresh. You are treated as if you are the only guest in the place but never in a cloying or over-enthusiastic way. They are friendly but not pretending to be your best friend. They are professional and efficient and when I say that my back-up plan in life when I was young was to try and get a job as a server at the Ocean Grill to support myself and my children, you can believe it's true.
So that's where we went today and we sat at the bar for a Bloody Mary because when I go there I want to sit at the bar and look at the ocean and settle myself down into that space and place, letting each one of my senses open up to all of it. 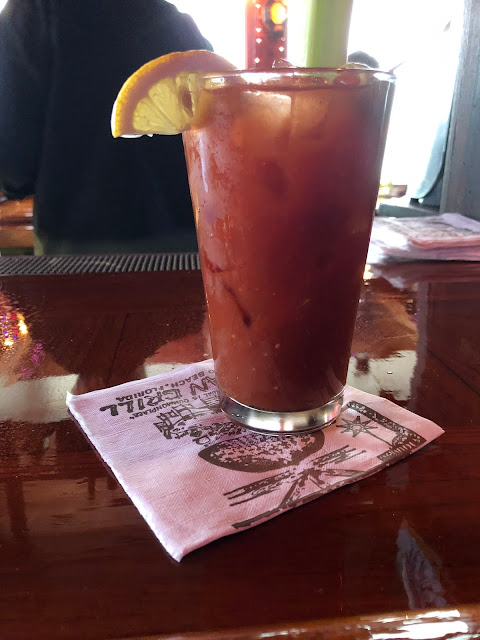 I could have happily sat there all day long, drinking Bloody Mary's but we only had one. There is day-drinking and there is day-drinking and I am too old for the serious kind. But oh! It was tempting to ask for another.
Instead we transferred to a table (by a window, of course) and I ordered what I always order when I go there for lunch, which is a shrimp salad. 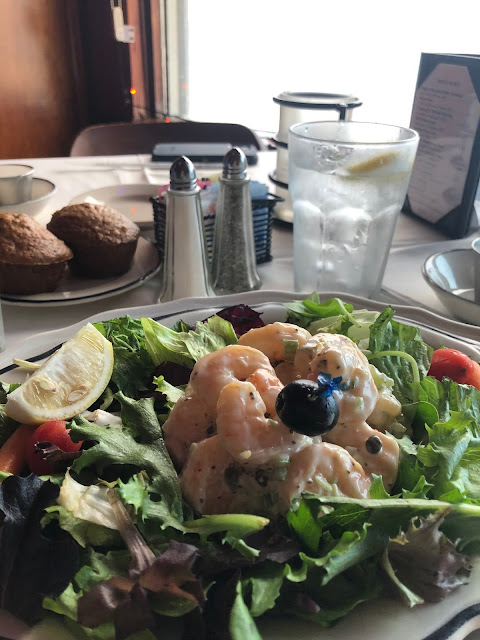 Mr. Moon got scallops and a salad, and muffins that are more cake than bread were set before us. My husband was so taken with them that our server brought us three in a bag of them to bring home.
Oh sigh. Oh sigh, oh sigh, oh sigh. 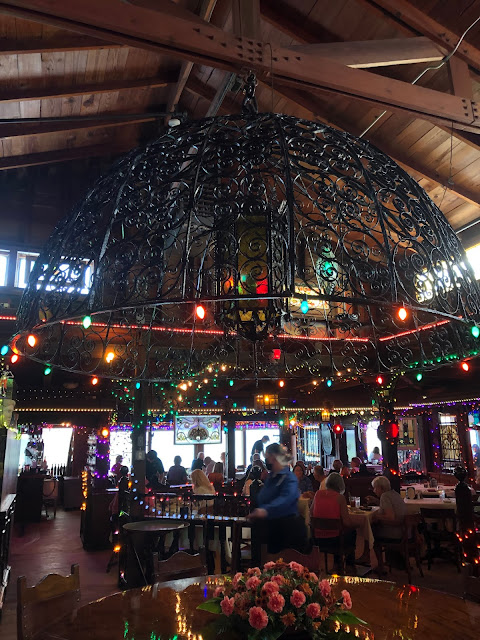 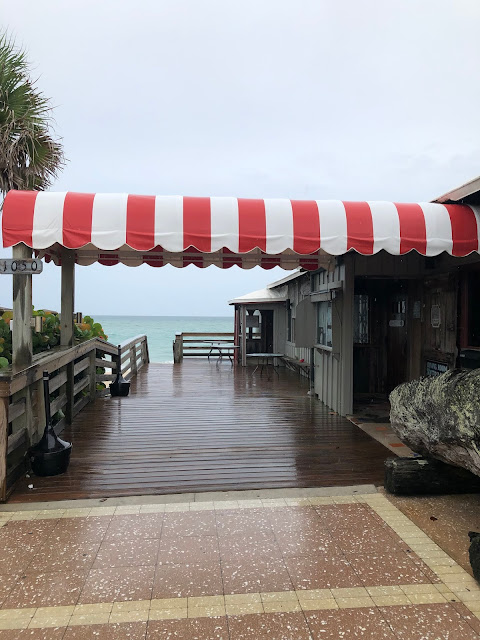 After lunch we drove around Vero for a bit and then came on back to the Cabana and went swimming under the gray sky.
Heaven and magic.
Mr. Moon just told me that Brad's here. I better go say hello. Also, it's time to go down to the dock. Just because it's too gray for a sunset doesn't mean the sun won't set and I want to be on the river when it happens.
******************** 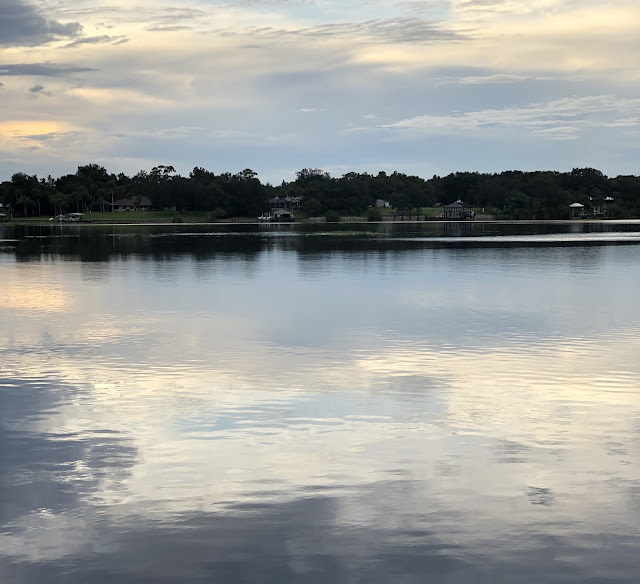 Glen is on his way to go pick up a pizza. I'm not cooking today, it would seem. We watched the river as the sun went down. There was no wind, the water was a flat, silver mirror and mullet were jumping and slapping, and the no-see-ums were fierce. Still, it was peaceful and lovely and I feel completely full of goodness and rightness.
I am so very lucky.
Love...Ms. Moon
Posted by Ms. Moon at 8:01 PM