Today was better. The redlining anxiety dropped to amber level and I busted my ass outside, working in the heat to trim and pull and cut and drag. After a few hours I put my shovel and my pruners down and said, "That's all I can do," and my husband finished up the part I'd been working on by the front sidewalk where the rice plants and crocosmia had taken over.
He'd spent most of the day mowing and I'm sure we were both overheated by the time we'd finished doing what we'd been doing.
So. So. So.
I've taken a shower and rested and shelled field peas and have them simmering and focaccia dough rising. I'll bake the focaccia with cherry tomatoes and basil and some mozzarella and parmesan, not too much- not enough to make it a pizza but enough to make it supper.

The garden is still going and I have eggplants ripening and that corn will be ripe one day, maybe, and my new row of arugula has come up (oh ye brave and bitter green! how I love you!) and the tomatoes are still coming and the field peas continue to yield and the green beans and cucumbers are offering enough for meals.
It's okay. All is okay.
I'm not in a detention camp and I do not fear ICE coming to my door. I am not in Louisiana or Mississippi where a storm is flooding the denuded wetlands. I talked to a friend of mine the other day who lives in New Orleans. She is very, very recently widowed and now this. Life goes on, doesn't it, even when it has ended for someone we love. So it will be when we die- the earth will not stop its turning, the sun will rise and it will set. Storms will form and rain will fall and the people we love, the people we leave behind will have to deal with all of it, no time out for death, no special dispensation for grief. We may care. We may overwhelmingly care but the universe, it does not.

Sometimes that fact is comforting to me. That the universe just doesn't care. We, of course matter in the sense that energy is neither created nor destroyed but it is so far beyond nursery school mythology to believe that our own personal "me-ness" means a damn thing in the huge scheme of things but sometimes I wish that the universe DID care and that I believed that there was some sort of force for good which is constantly, albeit imperceptibly, moving towards the good.
But no. I don't.
And yet, I still do think that whatever we do in the name of good is positive if for no other reason than because the more good there is...the more good there is. And there is no denying that relieving suffering wherever possible is a holy thing.
At least in the church I belong to.

I talked to Jessie today. They are having good times up in North Carolina and the boys are happy and healthy and that is everything to a grandmother. I sent August a copy of Keith Richards' children's book, "Gus and Me" and he got on the phone to thank me.
"Did you send me my book?"
"Yes. I sent you your book. Do you like it?"
"I do."
It's about Keith's grandfather and the influence that he had on Keith's life and it's a beautiful story.
August told me that he missed me and he wondered what the house that Boppy and I are going to stay in when we visit looks like. He is so pragmatic, that child.
Here is a picture that Jessie sent of Levon. 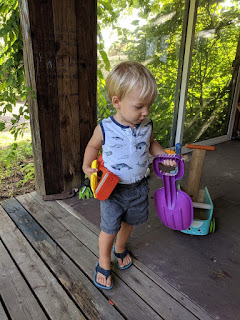 As you can see, the collection of fa-fa's is growing and Jessie says he now carries around a little truck, too. He looks more boy than baby to me. I'll see him and his brother in a little over two weeks.

Oh life. From the microscopic to the unfathomable vastness. What are all religions but a way to soothe us into believing that there truly is rhyme and reason to it all? And that if we follow certain rules we shall be saved from the obvious chaos.
And what is science but a way to understand that which seems so chaotic?

I feel tired and I feel confused and every day I feel I know less and less.

But I swear, I honestly do think that love is a force as true as gravity. We do not know the equation for its power yet but probably some day we will. And that will not do a thing to detract from its power, it's mystery, its beauty.

Of course I could be wrong. And the fact is, it makes no difference what I think.
Or believe. Or hope.

Still. I wish you love.