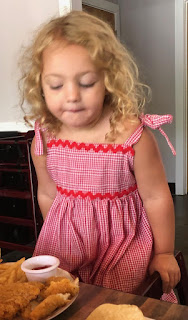 All my pictures were blurry today and for that I apologize but there's Magnolia in her new dress. I love it and wish I had one just like it. The occasion was a rare lunch out with MAY who has Monday's off and for once, we could all get together without her having to wait on us and it made my heart so happy. My May is a beautiful woman and lit with light and she's funny and she's a joy and obviously, she is beautiful. 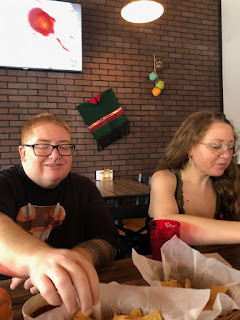 May and her brother. We decided on a new place in town called Maria, Maria. It's a family-owned joint and named after the owner's grandmother and it was terrific. Everyone was so friendly and nice and the food was very good. I got a tamale and a tostada named for Maria which was incredible and came with a sort of relish made with carrots and cucumbers and that may sound odd but trust me- it worked beautifully. 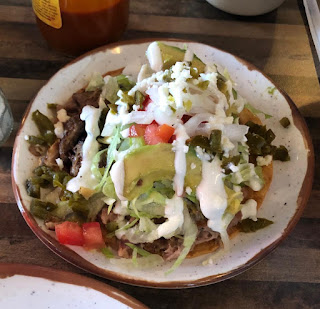 We will definitely be going back to Maria, Maria.

Gibson pulled a new one today. He brought his sketchbook and announced that he had written a comic! We all wanted to see it and he wanted to show and read it to us. I was quite frankly a bit blown away. He had chapter headings and pictures (as comics should) and his writing was very good, especially for a kid about to go into the second grade. It was DogMan vs CatMan.
I think.
There was a lab. There was a scientist. There was a mutation! I just love this new interest of his. It reminds me of Hank and May when they were little and would make stories with pictures. I really can't tell you how much it thrills me. He is such a loving and joyful boy.
Here he is with Rachel whom he spent his entire lunch telling things to. 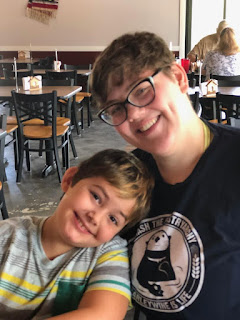 She is so sweet to the children. Well, she's just plain sweet. We are so lucky to have Rachel as part of our family now.

So we all ate our delicious lunches and talked and were happy and then Lily took her kids home and Hank and May and Rachel and I went to a nearby thrift store. Before we left the restaurant though, a nice man took our picture. 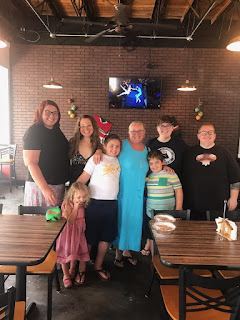 In my heart that was my birthday lunch because I'll be out of town for my birthday and I got exactly what I wanted from my children and my grandchildren which was time with them, all together, being happy. And that is exactly what I got. Can you tell how proud I am of my family?

The thrift store was fun but I didn't buy a dang thing. I enjoyed it though, shopping with the ladies and Hank, finding crazy shit and sharing all of it. "Oh my god, y'all- look at this!"
Etc. I mean, isn't that why we go thrift store shopping?
Here was the best/worst thing I personally saw today. May found it and shared it with me. 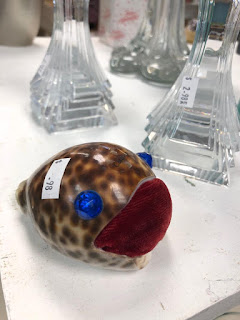 Someone MADE that! Is it a pincushion? Or...what?! Anyway, even at the low, low price of 98 cents we decided to leave it in the store.
Yeah, we'll probably regret that later.
Or...not.

So it was a very good day and my anxiety has dwindled to being completely manageable and I am giving all credit to the antidepressant so I need to just buck up and take the damn thing. I feel a constant, small current of what feels like sadness and in situations with a lot of people around I get a bit stressed out. I still have some brain fog and that's annoying but it's not so bad.
It's not so bad.
And on Sunday we are leaving for North Carolina so I can get my hands on those other grandchildren. I saw some giant Tonka trucks in the thrift store today and I should have gotten them for Levon and August. Maybe I'll go back. They weren't cheap and they were a bit beat up but still, they were pretty cool.

Speaking of cool, we are having what my favorite local meteorologist is calling a "cold front" which means that when I got up this morning it didn't feel as if the toaster oven was on broil. My walk was much more bearable even though I did sweat like a beast anyway which is understandable in that it was probably almost ninety degrees by the time I got home.

All right. Time to make supper. Green beans from the garden will be involved. That's always a good thing. And tomatoes. Lord, we do have tomatoes. It's a glory.