In Which The Hartmann Children Delight Their Old Mer

Lily's had a bad cold for days now and because she's a mother she hasn't had much time (if any) to recover. To rest and let her body get over the virus. So this morning I texted her and asked if she'd like to bring the kids over for awhile so that she could nap and so she did.
I knew that I needed to spend some time with those three children. And I also knew that I didn't want to spend the day in my head doing mindless chores and that spending time with my grands would prevent that in all regards.
And it was absolutely a delightful day.
It was too hot to go outside so we did indoor things. Owen and Gibson and I played a rousing game of Battle and then I got out some wooden beads that Kathleen had given me when she moved into the house that she and her husband restored and rebuilt before she died. We sat down at the dining room table and by golly- those kids made some jewelry! 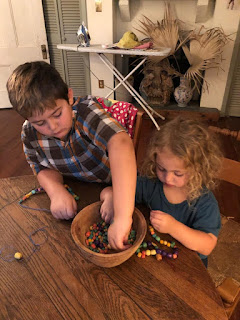 I was so impressed! Maggie did get one needle stick in her finger but it didn't even bleed so I'm pretty sure she'll be fine. There were a few tears but once the Band-aid was applied, all was well and she lived to bead again. They made necklaces and bracelets and a headband and Owen even made earrings that loop over his entire ears. They used all of the beads.
And then we had lunch. There were cheese toasts and tuna salad and watermelon. It was delicious.
The kids were so good and I was in a fine mood and after I'd cleaned up from lunch, Owen wanted to go through my jewelry to see if I had any earrings he might have. If you recall, my little rock-n-roll guy has both ears pierced now. So we looked at all my jewelry and it would appear that I have jewelry I don't know where I got or why I even have, for that matter. But there you go. Another gift of aging- it's all new every day!
I found a few old stud earrings I'll never wear and he liked them so I gave them to him. I also found two miniature red dice that I really have no clue as to their origin. They had been part of some sort of jewelry before as they had the little wire circles to attach to something and Owen fell in love with them. I found two old plain earring wires and managed to get the tiny dice on them and voila! Red dice earrings! He was thrilled. I was too. It made him so happy.
And then Magnolia wanted to sit on the swing which is on the little porch that we can access from either my bathroom or my bedroom and so I asked Gibson to join us and we all sat on that swing and watched a storm come in and it truly was a magical time. There was a banana spider above our heads who had her web between the chains of the swing but we paid her no mind and she did not bother us at all. Maggie got down and went into the house to fetch one of her babies and we sat there and listened to the thunder and watched the lightening and gently swung with the spider swaying above us, the huge oak tree in front of us collecting wind in its leaves and then the rain came.
"Hey you guys," I said. "I want to say something."
"Okay," they said.
"What I want to say is that this is one of my favorite moments ever of being your grandmother."
And it was. I wanted to remember it forever and I told them that, too.
"Take a picture!" said Owen.
"I'm taking pictures in my mind," I said.
But I took a few with my phone, too. 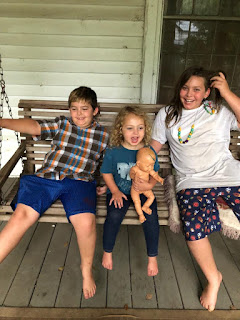 Of course that doesn't do the moment justice but there it is- three happy children doing nothing at all but rocking in a swing on MerMer's porch while the rain came down. I wouldn't have traded that for anything in the world. It was some sort of perfection for my heart. I spent so much time on that swing with Owen and with Gibson when they were babies, singing to them and trying to get them to fall asleep, reading them books when they were older and just talking about stuff. Owen and Gibson used to pretend that the swing was a ship on the sea and there were many adventures we sailed into with Captain Owen and First Mate Gibson.

And then it was time to get ready for Jason to come and pick them up and Gibson, remembering how proud I was of him last week for cleaning up the den by himself to surprise me said, "You guys take it easy! I got this!"
And off he went and in just a few minutes, the room was as tidy as could be, all the toys put away and everything where it should be.
Again, he was most proud. 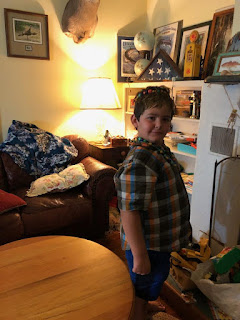 See his jewelry?
This is definitely a stage I want to encourage for as long as it will last.

And then Jason got here and they went a little wild but not too bad and he got them in the car and off they went after I kissed them except for Maggie who, suddenly, was not having it. That was okay. She gave me many kisses during the afternoon.
It was just so damn sweet. And easy. I am grateful as hell for every minute of it.
To be honest, it's not always that way with grandchildren. They can be in moods and I can be in moods and spilled juice can be major and messes can drive me to distraction and arguments can make me want to yell, and, and, and...
But today all of the elements came together to form a sort of grandmother's perfect dream with hugs galore and lots of laughing and lots of sweet memories and a seeming truce between the three siblings that probably didn't last until they got home but it was purely great while it lasted.
And Lily got to rest some and I am so glad of that.

A good day. I didn't get a damn thing done and I don't care at all. I did exactly what I wanted to do and it was all good.

So. There you go and there you have it.
Another day in Lloyd.
I sure do feel lucky.