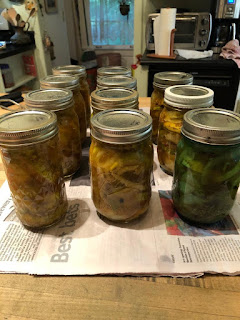 When I woke up this morning I knew that I was a hot mess. Anxiety has taken over and I had somehow hoped that this sort of full blown storm of it was not anything I would ever have to deal with in my life again.
Well. Hopes and dreams, baby. Hopes and dreams.

It's so hard to describe what anxiety feels like. First of all, it doesn't feel like "anxiety" which is what one might feel before going to an office party or having to give a speech although those things can indeed be incredibly anxiety producing. Still, anxiety would be a normal reaction to those events.
This sort of anxiety, the kind that is toxic and is almost too much to live with feels more like what you might feel waiting on a doctor to walk into his office and tell you what the results of some test are when he's asked you to bring someone with you for support.
It's like a constant sense of panic and although it may have absolutely no basis in reality, that fact does nothing to assuage the constant adrenalin dump that accompanies it. The body is trembling on the verge of fight or flight with no outlet for either and no visible threat to fight or control or escape from.
Yes. It is JUST a feeling.
And those who suffer from it are more than aware of that even as the feeling that overtakes us leads us into places so dark and so horribly uncomfortable as to be physically unhealthy.
There's a whole lot of biochemistry involved and none of it is very positive.
And of course there is meditation, there are breathing techniques, there are grounding techniques, and there are medications to help. Exercise can help but in my experience it has to be intense and prolonged to provide much relief. The first time I really started experiencing anxiety I was taking yoga three times a week, walking, and eating the best diet of my life.
And yet...and yet...I was dying inside.

So. Knowing all of this stuff and knowing that as bad as it felt when I got up, it could get much worse, I decided to start back on the antidepressant that took me months to fully wean myself from and if I had a choice in the matter, I wouldn't do that.
But I don't have a choice in the matter.
Not if I want to live my life.
I also took an Ativan this morning, perhaps because I'm a wimp or perhaps because I am wise. I do not know. But it helped. And I set about getting the things done around here that I needed to do, very deliberately and very carefully because between the Ativan and the anxiety brain things can get tricky.

I took the trash and the recycle and saw the old racist at the dump. We ignored each other as we do. I came home and started the process of making pickles which sounds pretty funny when you think about it. But my refrigerator was full of cucumbers and I picked a few more from the vines this morning and it was actually very good for me to have something to do which needed that level of concentration. Washing and trimming and slicing the cucumbers, weighing them out. Peeling and slicing onions and also cutting up peppers from the garden. Sterilizing the canning jars and lids. Making the pickling solution with vinegar and sugar and spices. Salting the vegetables and letting them drain, adding them to the vinegar solution and bringing it all to a boil. Packing the hot, sterile jars and putting them back into the canner to finish the process.
Removing the jars and setting them on the counter to wait for the "pop" which indicates the jars are sealed. And then the real true visual proof of something done, something accomplished, something which will be of use and enjoyment in months to come which is a good reminder in and of itself that yes, there will be months to come and pickles will be enjoyed.
I needed to do all of that and thank god I had the work before me to do.

I was going to iron after that but simply could not. I laid down on the bed and slept for a little while. Unlike some people with anxiety, I can sleep and I don't know what I'd do if I couldn't.

My kitchen is cleaned up and ready for me to start supper. It has been raining most of the day and I collected six eggs including one I do not recognize although come to think of it, it may be Darla's first egg since she went broody a few months ago. I have not completely fallen apart, no matter how closely I feel that I am doing exactly that.
I have often said that people who suffer from mental illnesses can be, and often are, the best actors in the entire world. We do not want to frighten our loved ones nor do we want to make a big deal out of something which is so obviously "nothing." We feel a great need to hold it together. To not give in. Because it all feels that if we do give in, if we do quit holding it together there will be nothing for it but something which looks incredibly frightening and insane and although we don't really use the term "nervous breakdown" anymore that rings disturbingly familiar.

Not just a bluegrass term, y'all!

And here's another crazy thing- since a person in the throes of anxiety can indeed appear to be functional and relatively normal, it is so tempting for the sufferer herself to think, "Well, yeah. I'm fine. I'm okay. I'm really making a big deal out of nothing."

It's not nothing. It's just not.

But. One does need to go on and that's why I'm getting back on the medication. That's why I am making allowances for myself and staying extremely aware of what I'm going through. I have things to do and places to go. I cannot become a terrified zombie. I have babies to love on and a garden to tend and a husband to take care of.
This is not my first rodeo and I'm going to do everything within my power to be okay.

Forgive me if there are a lot of grammatical and careless errors here. I know I'm not functioning as well as I could be. Again- I am aware of that. Also? I really don't need to hear about this supplement or that one that helped your cousin with anxiety or depression. I'll just be flat-out open about that. I've tried them all. Gut bacteria? Yeah, when they get the studies done and actually know what they're talking about, I'm going to be first on the list to sign up. Meanwhile I'll continue on with being outside as much as possible, keeping busy and out of my head, and making sure that if I need help, I will ask for it.

And I would say to any of you who are experiencing these things and feel completely hopeless and helpless and, okay, frantic- talk to your doctor. Get some damn help. Brain science sure isn't what it could be but there are some answers and there is help.
And hang on.