In The Sweet Green Hills 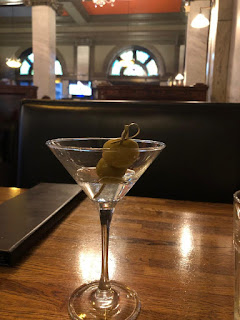 It was just about the best birthday ever. I have determined that for me, being on the road or at least out of town is just the best way for me to celebrate. We had a beautiful day driving through the Georgia countryside, stopping where we wanted to stop, going down the backroads.
We got to Athens, Georgia about 5:30 and checked in to the Graduate Inn where I discovered that Mr. Moon had upgraded us to a suite for my birthday and it was such a sweet suite and a sweet thing for him to do.
We had our dinner at the South Kitchen+Bar which is in a most beautiful old building about a ten minute walk from the hotel. There's stained glass and marble and we dined well.
And then we slept well.
We got up this morning and got back on the road and now we're here in a pretty little cabin in Black Mountain just a few miles from where Jessie and Vergil are staying. Jessie drove over with the boys and it was so precious, getting to see them. As soon as Levon saw his grandfather he said, "Big Boppy!"
They've both grown. But they're still August and Levon. Levon wants to do everything that his Auga does. He was carrying both a tractor and a shovel when he got out of the car and before too long he and Boppy were playing with the tractor and August and I were reading books.
And then we drove over to where Vergil was working on the property that he and Jessie are buying on the mountain near his mother's house and his sister's house. They'll eventually build their own house and it will be beautiful. 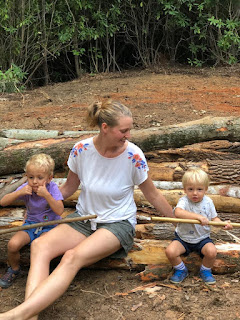 August is making a funny face because, well, he wanted to.

We all had our supper at a place in downtown Black Mountain and it was good and we ate outside and the boys played and played with rocks and running while the grown-ups talked. 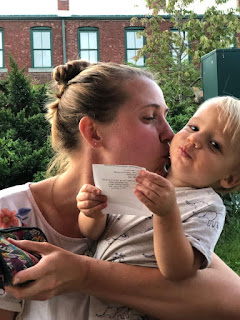 So it's been a most fine trip so far and I'm feeling so grateful for every second of it. I think I may back-off the blog-world for a few days. I'll probably report in and try to read some blogs but I'm going to be pretty busy. And right now I'm just tired.

Thank all of you who birthday-greeted me. That meant the world to me.
I am well and truly 65 now and so far, it's okay and I'm happy to be here.
And, as Keith Richards always says, I'm pretty happy to be anywhere.