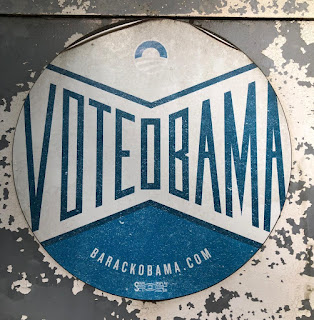 I knew I had to go to town today. Getting old means that before you go on a trip you have to make sure you have all your medications. Remember last year when I went to Roseland for my birthday and forgot my meds and had to go through a huge process to get the ones I needed while I was out of town?
Lord.
That's TWO aging problems right there, baby.
Anyway, because of my new relationship with Medicare and a supplemental policy with a prescription program I've had to change my pharmacy and now instead of Publix, I am going to another drug place which I won't name but it rhymes with Galwreen's.
And so far it's been a pain in the ass. I can't call in my refills because I only have Publix's Rx numbers and blah, blah, blah so I took two of my bottles in today to get those in the system and to get refills and they had to call Publix and more blah, blah, blah.
So it was going to take awhile but I was not feeling particularly anxious or overwhelmed and so I went and did a little shopping that I needed and wanted to do and even went to Pier 1 where I actually found, completely out of the blue, a pretty cotton and linen dress that looks sort of like a Mexican dress but which was actually made in India so that was nice and although it doesn't have pockets, I think I love it. It's very soft.
I went to the New Leaf where our beloved Billy works but he was in a meeting so I didn't get to see him. I did get the things I needed for our supper. I had texted Mr. Moon and asked him if there was anything he'd like me to make and he suggested "that soup we eat with chopsticks."
Ah yes. The ramen noodle soup. It's so funny that he'd ask for that. It's made with tofu and a few vegetables and noodles and an egg. Simple, simple, simple. I was inspired to make it the first time from watching a Netflix series called "Samurai Gourmet".
"I hope I remember how to make it," I wrote him back.
"You will," he answered.
He has faith in me.
So the New Leaf was the perfect place to get my tofu and some scallions and a little stalk of organic broccoli and and although I was sad not to be able to see Billy, it was still a fine little shopping experience.

And then I took myself to lunch.
It's funny- with all of the insane neuroses I have about so many different things that should not be anxiety-producing at all, eating in a restaurant alone is not one of them. In fact, I enjoy it. I keep an emergency book or magazine in the car for just such occasions and so I and my New Yorker went and had a delicious cup of garbanzo bean soup and a half of a Cuban sandwich at a place that was packed and I felt completely incognito and even invisible except to the server who was quite attentive. This is one thing about aging I do like- I ain't worth the trouble of looking at. As an added bonus, I was surrounded by the sweet sound of people speaking Spanish.

As I drove around town, I listened to the Mueller testimony and it was as disappointing as I had feared it would be. GODDAMMIT, MAN! Just come out and say that Trump is a fucking criminal! But nope, nope, nope. And I have nothing more to say about that.

Walgreens (whoops!) texted me to say that my prescription was ready to pick up which was quite fortuitous because the place I was eating is about a hundred yards from that drugstore. When I got there I discovered that they could only fill one of the two because the other one had no more refills and they can't call the doctor on new transfers.
Sigh...
Whatchugonna do?
The price was right, though. $0.00.
So I had to call the doctor's office when I got home and I've already received another text saying it's ready to pick up so there's another trip to town unless Mr. St. Moon will pick it up for me and I'm sure he will. I want to tell all these people- Look! I live in Lloyd. I can't be driving back and forth to Tallahassee because of your stupid rules.
That never works anyway so I just kept quiet. For some reason, I am not that special. Which...damn.

And then I went to Costco where I bought a book that I can read out loud to my husband when we take our trip up to Asheville. I am actually getting quite excited and have even made us a reservation for my birthday supper at a joint called South Kitchen + Bar in Athens, Georgia where we'll be spending the night on our way up. We ate there the last time we stayed in Athens and it impressed me. It's right down the road from where we're staying at a place we've stayed twice now already which makes me so happy because I already know I like it. I am such a creature of habit, even when I'm doing something not in my routine.

And there you have it. I guess the antidepressant is really kicking in and thank god. It feels so good to be able to function at a level that most anyone would call "normal" but which can sometimes be almost impossible when the anxiety is upon me.

I better go make that soup that we're going to eat with chopsticks. The tofu is being pressed and the vegetables need slicing. I am sorry not to have kale or another type of green from my garden to go in it. Last night we ate a supper that had so much goodness from our own growing as well as venison from the woods that my husband brought home. Eggplant, tomatoes, corn, cucumbers, and field peas. I may have been in despair about it all yesterday but today that seems like a pretty swell thing. My corn has been a huge disappointment. Some critter has been getting into the garden and knocking over the stalks and shucking the sweet, white corn right there. I suspect raccoons. The ears are small but the few I picked to cut the kernels from the cob for salad were delicious.
Dang critters.
As always- it's too much nature but it's also all part of the whole of it.
Speaking of which, here's my extremely large companion spider who lives right outside my back porch. 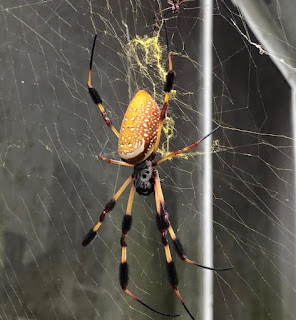 Isn't she a beauty?

Five more days until I get to see August and Levon and their parents.
I just can't wait.