Not Sure Why This Isn't A National Holiday 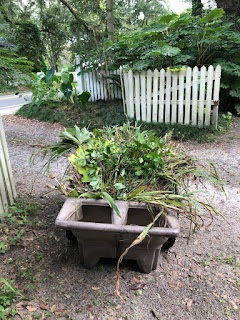 And that is about the extent of the work I did today. A garden cart full of pulled crocosmia, trimmed sago fronds, thorn vine, Virginia Creeper and a few other various weeds. Most of it came from that area you see to the left of the open gate where the border grass is also way overgrown but pulling that shit is like pulling wisdom teeth and I just didn't feel up to it today.
Fascinating, eh?
On the other side of the gate which you can't see there are areas behind and in front of the fence which I have allowed to get completely overgrown with invasives and small trees that were rooted from bird poop, mostly likely, and a whole lot of very healthy-looking poison ivy. 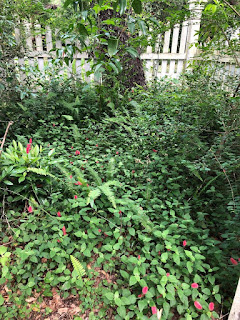 I just don't even know what to do about all that. Ten years ago I probably would have bought some Round-Up even though I already had my deep suspicions about the stuff. I had two good friends, one a master-gardener and one a sort of scientist who both assured me it was safe to use but we now know that that was bullshit and I can't, in good conscience, use it. I love it when people post on Facebook about using things like vinegar to kill weeds.
HAHAHAHAHAHAHAHAHAHAHAHAHAHAHAHAHA!
Yeah. Maybe down to the root. Maybe wimpy yankee weeds. What I've got going on here would simply laugh and laugh at the very audacity of anyone thinking that something like vinegar would have the least effect on it.
Mr. Moon has recently gotten his tractor fixed and after he goes back up to his former hunting camp in Georgia to collect the bush hog attachment he can pull and scrape everything in there and I think that's what it's going to take. For those of you who don't know what a bush hog is, go ahead and google it if you feel the need.

Where was I going with this?
Nowhere, obviously.

I probably should have been packing today but I can do that tomorrow. It's not going to take that long. Trust me.
Jessie says that this boy 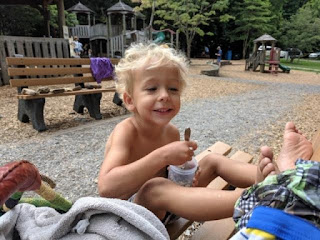 told her this morning that he'd dreamed that Boppy and Mer were there to visit and when she told him that we would indeed be there in a few days he was very happy. So are Boppy and Mer.
I looking forward to the take-it-as-it comes trip up there too. We had such a good time doing that last summer. Was it last summer?
I think so. I'm not sure. Time is so funny these days.
Speaking of time, here's a picture that Lily sent today. 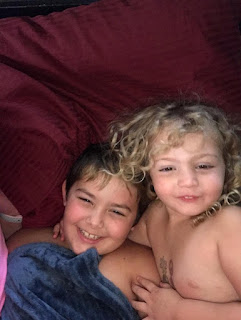 I told Lily that these are the moments to cherish because the time will go by and it will all be so hard to remember. Gibson and Maggie have been going through a rather contentious period, mostly because Maggie wants everything Gibson has and of course that's a grievous offense to an older brother who is often forced to share. But oh, when they are being sweet and loving- well.
What could be more beautiful?

All right. I guess that's about it. No one needs to hear about my clean sheets.

But, but...BUT!
Guess what today is?
It's this guy's birthday. 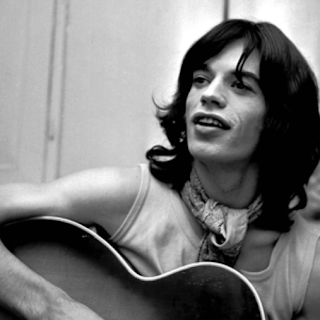 Sir Michael Philip Jagger. He is seventy-six years old today. And by the way- very few things piss me off more than someone saying whatever years-young. What ageist, condescending crap. Obviously, Mick was not seventy-six when that picture was taken. Wasn't he pretty? Do you realize that Mick is older than Robert Mueller?
Whoa.
We all age differently, don't we? And possibly practicing law can be harder on a man than a life of rock and roll. If you survive it, that is. And Mick has certainly done so. Hell, Keith Richards is older than Robert Mueller. Yeah, these guys have more wrinkles but they can still do two-hour concerts that leave the audience exhausted.

Okay, okay. Enough about the Rolling Stones.
Well. No. Not really. There's never enough for me but I'm sure that plenty of you have had enough.

Go have a martini. It's Friday.