Stuff. So Much Stuff

I cannot seem to catch up on my chores.
"Chores" is such an old-fashioned word, isn't it? Reminds me of The Waltons or something.
"John Boy, have you done all your chores? You can't be messing around with that writing stuff until you've got the cows milked!"
I suppose I do lead a rather old-fashioned life in some regards and I'm sure that the Waltons would be familiar with the things I regard as chores although someone would have to show them how to use the washing machine and the dishwasher. They'd understand the workings of the hen house better than I do, though, I'm sure. And the garden as well. Plus, I dress just like Grandpa Walton. I'm starting to look like him, too. God, I miss Will Geer. 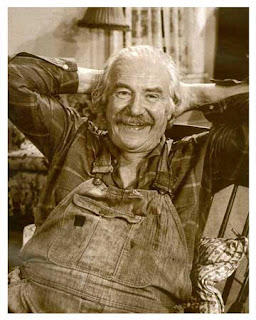 I don't know. Today's a day I don't know shit and one of the things I really don't know is how and why people just keep on doing it. I was in Publix today, wandering around the aisles with the millions of choices for food that we have now and I just kept thinking that maybe I'd just quit eating and that would eliminate cooking (a chore) and also...well...
Don't worry. I bought a lot of stuff. I am not apt to either stop cooking or eating in the foreseeable future.
I bought a new broom today. I can wear a broom out and that's the truth. The last broom I bought has been a good one and I went to the Ace hardware and bought another one just like it today. The Warehouse broom. Heavy duty. That's what it says on the label. I also bought new dish towels at the Costco. Cotton and linen. This is pretty huge because some of my dish towels are things I pulled from the bag Mr. Moon keeps his car-cleaning rags in. Hey! They had no holes!
Sample: 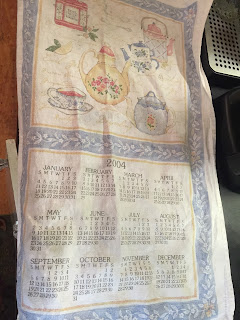 Remember those? Your granny had them. Do they still make them? They're perfect Christmas gifts. For an entire year you can hang that fucker on the wall as a calendar AND a decoration and then for the next three decades you have a fine linen dish towel, plus, every eleven years you can use it as a calendar again. Or twenty-eight years. I don't really understand how this works.
I'm sure Mrs. Walton had a few of those towel calendars to wipe her hands on, cover up her rising bread with. I mean- look at that thing- it's 16 years old and still perfectly fine.

Anyway, now I feel rich as shit with a new broom and new dish towels. And a 25 pound bag of Chick Starter and other assorted and sundry items either to eat or use around the house.

And that's about all the excitement around here today. I did get this picture from Lily. 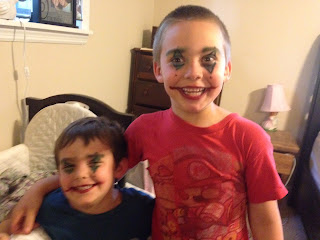 Owen and Gibson decided they wanted to be The Joker. A little creepy and scary but nice make-up job, Mama! Why does Gibson look so good with red lips?

Lily and Jessie are eating all healthy and shit and sending me pictures of the amazing things they are cooking and I'm like, "I ate a pork chop as big as Mount Vesuvius." But I do have whole wheat focaccia bread rising for us to eat for supper with mozzarella and tomatoes and garlic and basil. I might make a salad if I can get motivated.

And last but not least, my friend Ziggy posted one of the wonderful Playing For Change videos on Facebook today and it let the tears break through my achy eyes.

There's very little which gives me as much hope for humanity as these videos and I'm serious about that.