Let There Be Light

Oh, Japanica! never fails to impress. We came in, a party of seven with two babies and they took care of us royally. Not only did Owen get early release today but so did Jason! His manager had messed up the schedule and so he got sent home and Mr. Moon came to lunch too. August had his first experience (I think) with sticky rice and he got it all over himself and loved it. That child is eating everything. He has a top tooth in now, sharp as a little razor, and munches away happily on whatever his mama will give him. He still loves nursing, of course, but is at that stage where if anything else is going on he wants to pop off the breast constantly to see what everyone else is doing. He is such a fine little man, so thoughtful. I know I keep saying this, but he is.
He just is.
I said the other day that he would be starting to pull up soon and Jessie corrected me- he already is and had started when we were at the beach. Why did I not notice this? I don't know.
But here he is in the Goodwill bookstore which we visited after lunch because that is what we always do. 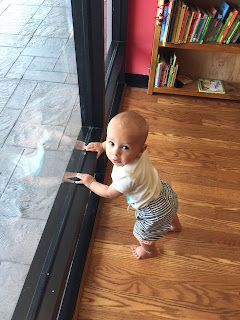 Isn't he a love?
Oh yes, he is.
Ritual is so important to children. Humans must crave it. After lunch Owen and Gibson begged me to go sit on the comfy couch with them and so I did and they snuggled up to me when I said, "Give your old Mer a cuddle. She needs it."
Owen didn't cuddle for long but it was a good cuddle. Gibson, however, pretended to be asleep on my old bosom and whispered, "Look at me, Mer," so that I would notice his closed eyes.
"Oh, are you asleep?" I asked. He nodded, eyes still shut tightly. They popped right open though when Owen announced it was time to get the lollipops.
It was mighty sweet while it lasted.
I did not get a picture of Magnolia today which is too bad because she was wearing her lady-bug outfit with matching red hair flower. As you can imagine, she was precious.
And I'll have to start getting more pictures of Owen. He is growing so fast. We all agreed that he is going through a growth spurt. Lily says he's eating so much. He had TWO bowls of miso soup today and TWO bowls of salad with ginger dressing and all of his sushi.

So here is what Gibson did at the bookstore. 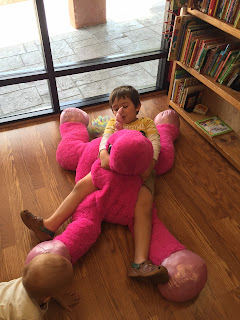 He found a giant pink unicorn and wrestled it to the ground and rode it like a rodeo cowboy. August watched intently, taking notes in the art of unicorn riding.
I got Owen a book on mythical monsters and a video and Gibson a Toy Story book and a video. This has become our ritual too- Mer buys each boy a book and a video.
Alas, we found no treasures today like the sterling silver teething bell we found a few months ago.
But it was still fun as it always is. I love that place.

I went by Publix on my way home and I felt like I might die of exhaustion as I got out of my car and crossed the hot parking lot to the store but when I got inside, there were two of my favorite ladies, employees whom I have met through Lily. The sweetest women. We chatted a little bit while there was a lull in customers. One of the women has recently gone through major surgery and chemo for cancer and she reports that she is now feeling better than she did before she got sick.
What cheering news!
I got good hugs from both ladies before I left and between all of that and the love I got from my family today, I feel so much better. Tired, but better.

And tonight Mr. Moon and I are having frozen pizza for supper if you can believe it. I just can't imagine cooking. We had our vegetables at Japanica! and our fruit this morning in our smoothie. Life will go on. And tomorrow we will go to Apalachicola and we have a sweet friend who is coming out to house-sit and chicken-sit and cat-sit. I texted her today to ask her if there was anything I could get her at the store to have here that would please her.
She said maybe some Dr. Pepper and so there is plenty of that.
I am so looking forward to going away. Jessie asked me today what we were going to be doing in Apalachicola.
"None of your business!" I said. We tittered like Wilma Flintstone and Betty Rubble. She and I are like fifth-grade boys when it comes to such matters. We embarrass everyone around us at times. And this, too, is one of the joys of having grown children.
We have our boundaries, as all children and parents should, but we can dance around those boundaries with great hilarity.

And last but not least- Mr. Moon has gotten Tearful and Mrs. Tearful's camper van which he bought, running nicely and it is now parked in Lily and Jason's yard and tomorrow night Jason and the boys are going to camp in it. A good way to begin camping wherein you can run into the house if you need to poop. The boys are beyond excited. They are going to sleep in the loft area! Their daddy is going to sleep in the bed beneath them!
I love this. It makes me so happy.

Do you know what? 24 hours ago I could not even begin to imagine anything ever making me the slightest bit happy again.
And here we are.
I still feel a bit dazed and hives have broken out on my arms (a not-unusual reaction after I have what I suppose I could call a depression/anxiety attack) but I can think of things which make me happy.

Mick is trying to round up the sister-wives to go to bed now. The frogs are starting to croak. The evening birds are singing themselves to sleep. Guess I'll go attend to the onerous task of preheating the oven.