And There Is A Lady Singing 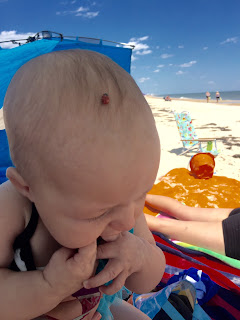 That's Magnolia with a ladybug on her head at the beach.
It's been a real full day. Gibson hit the beach and hit it hard. He did roll in the sand and I buried him twice and he rolled and tumbled in the almost-flat surf and got up, blew his nose, wiped the salt water out of his eyes and got back in.
We saw two daring rescues in almost the same exact spot. The first was a person who fell off and couldn't seem to get back on her stand-up-paddle-board. I kept looking out there saying, "That ain't right." Finally, two kayakers went out and gave the unfortunate woman a life jacket and then a jet ski came and towed first her in, then the board and paddle. A few hours later, a jet ski seemed to be drifting in the same place. Finally, the jet-ski savior jetted out and the person in this case was about twenty yards from his vehicle. He was returned to the thing, cranked it up and slowly went back to the shore where I assume he rented the jet ski.
It was odd but I feel certain that tourists come down here and rent these things and have no real idea how to use them and even on a flat-sea day like today there are currents and most people just aren't strong enough swimmers to make their way back to the shore.
Another thing that happened was that a fellow was happily paddling about in the gulf with a life vest on and his wife came running down to the beach yelling for him to get out of the water! She was desperate. We looked up to see that dolphins were playing behind him and the wife had obviously mistaken them for sharks.
"They're just dolphins!" Lily and I yelled at her and she calmed down.
Good story to tell later on, I'm sure, but she was shaken and we felt so sorry for her.

Other than all that excitement, everything has been fine. Mr. Moon got here with fishing gear and a dozen beautiful roses for my Mother's Day. He is so precious. Owen and Jason will be here later tonight. Owen has a T-ball game this evening and they will leave after that. Gibson told me earlier today that if he was very, very little he would sit on my eyebrow but that if I blinked, he would fall off. I told him that if he did, I could catch him and keep him safe. He hugged me and told me he loved me.

So it's all good and all tits and toys around here and Mr. Moon and I have been to the Piggly Wiggly to buy chicken for me to cook for dinner with the sugar snap peas he brought from the garden. Lily and Jessie are drinking pina coladas and having fun with their babies and being sassy to their mama. 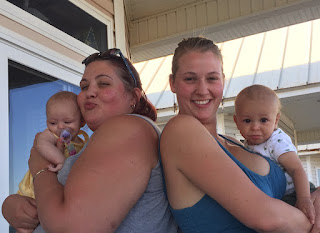 I'm having a vodka and tonic and mango juice and I just painted my toenails Caribbean blue. 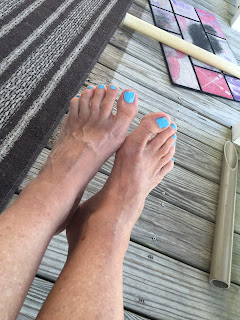 It's so blue it's almost disconcerting.
Oh well. We're at the beach. I just saw a VW covered in sparkly rhinestones and it was a thing of wonder and beauty.

Gibson and his Boppy are down at the beach fishing now and there's some sort of Cinco de Mayo celebration going on across the street at the Wine and Gourmet Food place. A lady is singing and she ain't bad.

It's so odd. I have everything in the world to make me happy and yet, I am feeling some rather deep melancholy. Last night I had such a horrible nightmare that I had to get up and walk around and I went outside and looked up at the sky. The stars were amazing and once again, still...I could see that white smokey wisp of the Milky Way.
I was reminded of how incredibly insignificant I am but it didn't really help that much, knowing that I can only view this vast and unfathomably large universe through my own eyes and my own mind but the sea and the sky could not have cared less and soon, I went back to bed and to sleep.