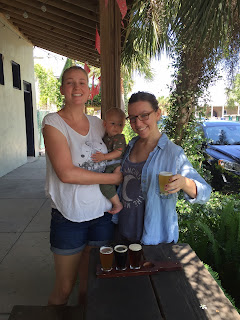 Melissa and Jessie and August and I went to El Jalisco, American Breakfast, Mexican Dinner for our breakfast this morning. It's in Eastpoint which is right across the bridge from the island and also right across another bridge from Apalach and it's a very popular place for breakfast and extremely reasonable, to say the least and we had a fine breakfast with everything from hash browns and biscuits to hueveos rancheros and tortillas. Then we drove on over to Apalach and did a little shopping. We stopped in at the local brewery and Lily and Jessie got the sampler platter and we sat under the blooming Confederate Jasmine, the very air as intoxicating as anyone could hope for.
It was cooler today and lovely and after an embarrassingly short time we were ready for lunch.
We went to the Owl and August sat in his high chair and it was like eating with Brad Pitt or a Kardashian or something. EVERYONE had to stop and talk to him and ask his name and remark on his pretty eyes. He got a little fussy and I took him for a walk outside where a French lady (I could tell not only from her accent but her French-Women-Don't-Get-Fat figure and her simple, elegantly chic appearance) said, "Oh, he is the most beautiful baby!"

We got salads and they were delicious and we dined rather than merely eating and then we came on back to the beach because Melissa had to get home to Tallahassee.
Jessie and August and I all took naps and then we got up and did our sunset walk.
Here's what August looked like before we left. 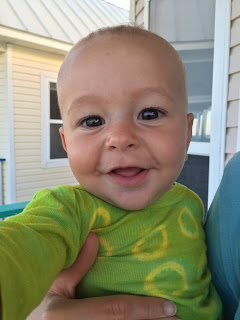 The beach at sunset time: 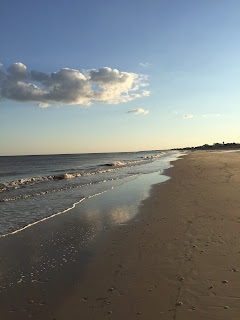 So it's just the three of us tonight but tomorrow Lily and Maggie and Gibson are coming and my sweetheart too and I will be so glad to see all of them. I miss that man of mine and I miss my other grands too and I think on Friday Jason will be bringing Owen down. It will be a full house and busy and noisy and lively and fun.
I've enjoyed these quieter times too, though, sleeping on my big bed, half of it completely unused, the pillows all piled up, my books and magazines stashed there for my reading pleasure but I'm ready for some snuggling and hand-holding. I've watched August make such strides in the last few days, inching his way across the floor and then sitting up all on his own. He makes the funniest noises and the biggest smiles and giggles and he's all the entertainment we've needed. He chewed a lemon slice and two cucumber slices at lunch and he's brown as a little peanut. I can't wait to see him with Maggie and to hear Gibson's and Owen's pronouncements on this beach house, to see them play in the water and on the beach. I wonder if Gibson will still roll around in the sand like a little puppy the way he did the last time we were at the beach together, turning into something resembling a sugar doughnut.

Well, that's it from the beach tonight.