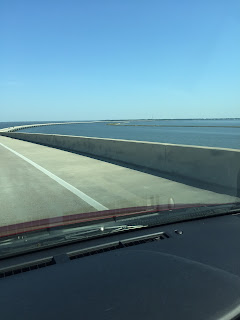 I snapped that this morning through my windshield as I was crossing the bridge, leaving Snake Stores Island. We did actually get packed and out of the house by 10:05 am and I am convinced it was a Mother's Day miracle. When I woke up this morning I was convinced that we were just going to have to buy the place because there was no way we could do it.
And yet. We did.
At one point Lily said to Gibson, "Watch your sister while I take these things out to the car."
"No thanks," he said most sweetly and politely. 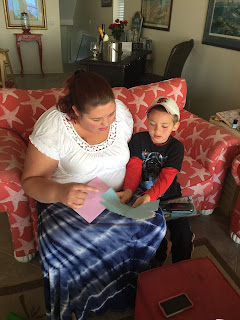 Here's Owen, helping his mother read the Mother's Day card he and Gibson and Maggie gave her.

After we checked out we drove to Eastpoint for our breakfast at the Mexican restaurant. It was awesome as it always is. The boys sat with their Boppa and played cards while we waited for our food and Lily and Maggie and I shared a table. Jessie decided to take advantage of August's usual nap time to just scoot on home and so she wasn't with us.

I enjoyed my drive back home and when I pulled into the yard, it looked so beautiful I almost wept. Mr. Moon mowed last week and the whole yard is just so green, so verdant, so...home. 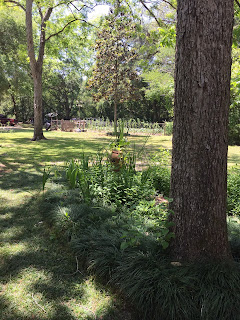 Before I unpacked a thing I had to run out to the garden to see how it was getting along and go check on all the youngun chicks. They were all alive and fine and the garden seems to be growing nicely. The beans are blooming and the pea vines are filled with peas. 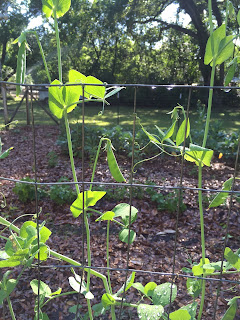 The confederate jasmine is blooming on two sides of the fence and my entire yard smells like the choir loft of god's own angels. 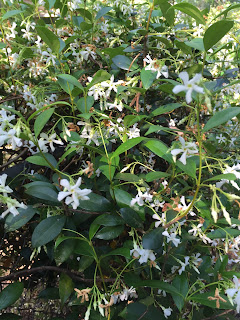 Mr. Moon and I finally unpacked everything and I put everything away and have laundry running and my husband got the big chicken coop ready for the teenager chickens to be set loose in there. They are so happy, running about and exploring their giant new space. 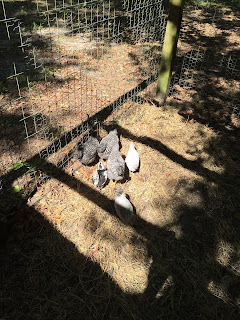 I can no longer tell the difference between Mona Lisa and Diamond but I'm pretty sure that one of them is a rooster. I could most definitely be wrong but one of them has a waddle beginning to grow whereas the other one does not.
So after we let them out, we cleaned out the tractor coop and moved the baby chicks into it. They were a bit shy at first, but they seem happy enough now. The little one with the crippled foot appears to be entirely fine. I can barely distinguish that one from its siblings and I'm thinking about just naming them Teeny, Tiny, and Tony. But maybe not. I'm definitely hoping that one of those ends up being a rooster because of their lineage- Elvis being their granddad.

So all is well in chicken world and I have watered the porch plants and have been reveling in the peace of Lloyd, 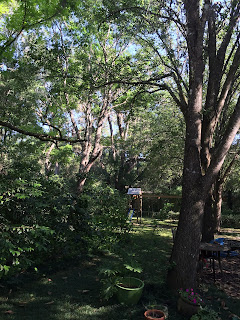 broken only by the train going by. Can you see it back there? That's how close it is to my house.

Mr. Moon gave me two beautiful new martini glasses with palm trees etched on them for Mother's Day and we are going to give them a whirl and go sit out by the coop and watch our baby chickens.
I will cook that pompano for our supper and I could not imagine a better Mother's Day, starting at the beach where Gibson hugged everyone enthusiastically and wished them a happy Mother's Day, even his Boppy, and which is ending here in my own beloved home with my own beloved husband.
All is well except that I have not yet seen Jack which worries me some. Maurice showed up and meowed piteously and I gave her some Temptations and kissed her head and gave her a little scratching. Cats just get so pissed off when you leave them. I think he'll show up, though. I surely hope so.

And tonight I will sleep in my own bed. The one I slept in at the beach was very comfortable but nothing compares to the comfort of our bed.