I Am Being Here Now Today 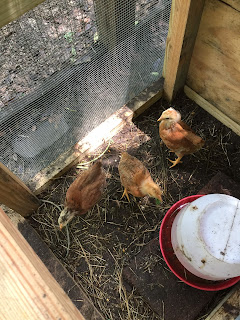 I feel very, very quiet today. As if I need to slip through the air as gently as possible. I not only do not care to control anything in this universe, I don't even want to disturb it although of course by my very breath and movement, I do.

I am leaving the lid up on the baby coop today to see if they want to take a little fly-out. They are almost as big now as the banty chicks. They are starting to be distinguishable in their coloration and markings. I suppose it is time to figure out which one is Rosabelle, which one Georgiebelle, and which one Lucy. I would take them out of the little coop myself but as I said- I do not want to disturb that which is today. I doubt they'll leave it on their own but if they want to, they can.

I truly must clean out the hen house and I suppose that's a disturbance but one that will mostly be ignored by the gods of this air, this light, this green life and animals which surrounds me.
Posted by Ms. Moon at 12:49 PM