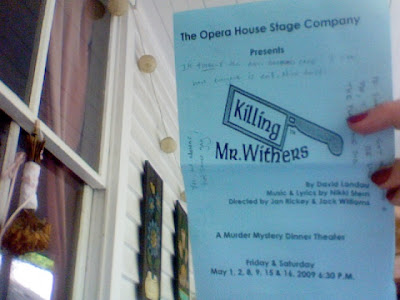 Okay, okay. I already posted today but then, in the guest room, I found something DownTownGuy had left behind (he always leaves something and honey, I found your belt, too) and I have to pass this on. During the play, the children passed notes back and forth and they are just too good to not print here. Sorry kids, I should have asked your permission but I'm your mother so sue me.

"This play has completely stopped making sense. And it didn't start out making a lot."

"This part is the weirdest."

"No. THAT was the weirdest part. No lie."

"I just realized they have a framed picture of an atomic blast. WTF?"

"It makes no sense!"

"What does a town that only has a gas station have a sheriff?"

"That lady looks like she's in drag but I want her wig!"

"It reminds me of the plays that girl used to write in my creative writing class about Jesus, the Peanuts characters and Scooby Doo."

"This play should be titled "Titties and Death."

"And what's up with the Rocky doll?"

"It has popped up from behind the counter 2x's."

"If someone got hit by a pie, it would be like the play we did."

"This is the most bizarre play ever. It's like something written in a creative writing class."

"On caffeine and shrooms."

"I love all the random accents they always use."

"I wish they were really doing the tango. Saucy!"

"It's like if 'My Fair Lady' was all Henry Higginses."

And my very, very favorite because I assume it refers to Natasha:

And yet, let me say that when they said it was their favorite play ever at the Opera House, I truly believe they meant it.