If You're Here Looking For A Recipe You Won't Find It. Tonight, Anyway

I woke up before the performance or a murder.

Hey! He was just trying to be friendly.

Anyway, that was an interesting dream and there was a great deal more of it but that was the easiest part to relate. I think it's hysterical that I have combined my seemingly unrelated obsessions in one dream.

As I said yesterday, today was go-to-town-and-shop day. And yes, it took me almost all day mostly because I had lunch with Hank, Rachel, Lily, Jessie, and Levon before I even began. That was fun. We went to The Wharf where guess what? They serve seafood. However, I got a Greek salad with chicken on it and it was good. We all talked to Levon about his birthday. He's excited but not crazy excited. He's taking it all in stride like the miniature full-grown man that he is. He really is like a little man in so many ways. As Jessie said to me recently, "If he could just get up at 5:30 every morning and go to work, he'd be such a happy guy."
And he would. The kid needs a job.
Have I already told you this? Forgive me if I have. It bears repeating. 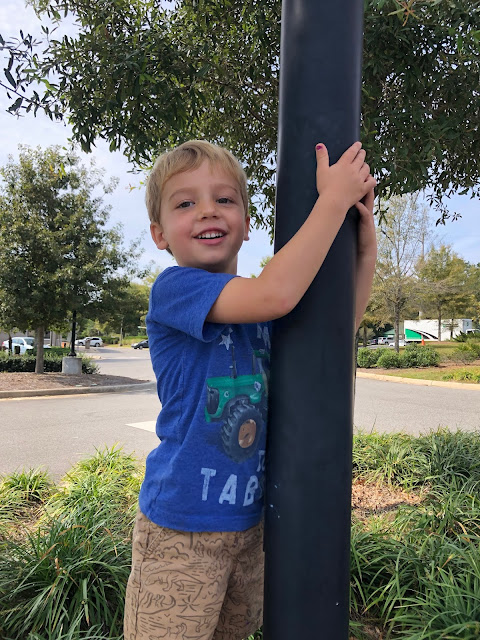 Kid who needs a job. Preferably in construction.

He turns four next Tuesday but Jessie and Vergil are throwing him a little family get-together on Saturday. It'll be potluck and there will be presents and a cake. It is so nice to be able to all come together for these events. And soon, August, Maggie, and Gibson will be vaccinated too. Owen has had one of his doses. Our family has been as careful as we can be and all of the adults have been vaccinated of course, and we are so lucky that none of us has gotten sick. Not even May who works in the wellness department of the local Co-op where people come in search of natural remedies for Covid along with things to boost their immune systems because they refuse to get the shots. And of course many of them do not wear masks because...well.
I shall say no more.

So that will be fun and tomorrow it is "Grandpanthers Day" at Maggie and Gibson's school where we will meet each child at their lunch period and dine with them. Maggie's lunch is so early that it will be our breakfast and Gibson's is so late that it will be our lunch. I bought chicken roll-ups at Costco today to take, and fresh pineapple at Publix along with a bag of chips. I'll take apple fritter cake too.

To be honest, I am a little exhausted just thinking about all of it. Or perhaps I'm just exhausted from my trip to town. By the time I got home I realized that perhaps I am not entirely at full-strength yet.

Here is a picture of some chickens. 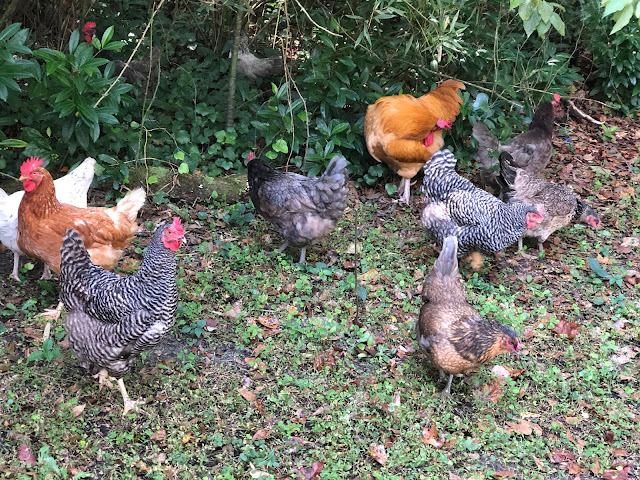 Can you see the two hiding in the woods? I swear, I think that these birds make a complete round of our yard every day, scratching in every part of it. They hardly ever leave the yard but sometimes they do wander next door to scratch about in the dirt parking lot/yard of the church. They always find their way home. I do not like them crossing the street and they generally never do. Now I KNOW I've told this story before but it's one of my favorites:
When we first moved here, our then next-door neighbor, Scott, got some chickens. This was well before I'd ever even thought of having chickens of my own. He let them free-range in his yard every day and, concerned, I asked him, "Scott, aren't you afraid they'll go out in the street and get run over?"
Scott looked down at me (he's almost as tall as Mr. Moon) and said, "Have you ever seen a dead chicken in the road?"
Well, I had not and seventeen years later I still haven't.
So- when someone asks the question- Why did the chicken cross the road? simply say, "She did not. The chicken did not cross the road."
I'm not saying that chickens never get run over or that they never cross the street. I'm just saying it must be pretty rare.
On a side note, I've been looking for recipes this evening for taco seasoning and I swear to god- the freaking autobiographies that people feel compelled to write before they give you the recipe drives me crazy.
"We don't give a shit how many times a week you ate tacos as a kid, bitch!" I silently scream in my head.
And then.
And then.
And then I realize I just told y'all what I'm taking to Grandpanthers Day for my grandchildren's lunches and talked about chickens for possibly the 987th time. At least. And I don't even have a recipe to give you.
Please forgive me. I have no idea why you're here but I sure am glad you are.
Love...Ms. Moon