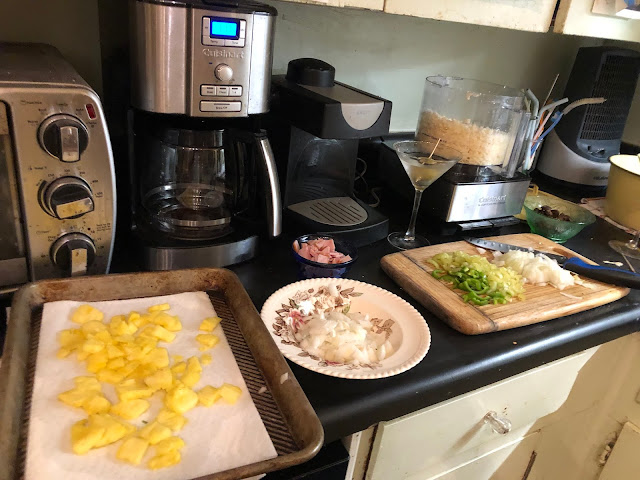 I took this picture last night while I was making pizza. The kitchen was still fairly tidy at that point in the process but it got crazier as I chopped more and more things to go on the two pies. They were good pizzas and tonight I believe we will have the leftovers with a salad. Mr. Moon is sitting in a deer stand and heaven only knows when he'll be home.

When he does get home, he's going to be blasted with the smell of old cologne. I reek of it and the bathroom off the kitchen reeks of it and half the house reeks of it.
Dang it!
One of the cats had thrown up on the rug in that tiny bathroom and I washed it and as I was putting it back in place, I accidentally tipped the stupid plant stand that I have in there to keep towels and stuff on because you have to lift it up to slide the rug underneath it and everything on the entire top shelf slid to the floor. 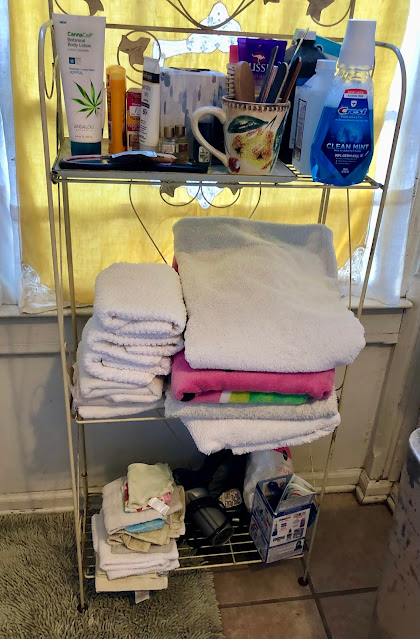 It's a miracle that the little tube was the only thing that broke. I should have thrown it away years ago. And I need to come up with a better solution than a plant stand for that stuff. Also, I have way too many towels in there and at least a dozen more wash cloths than we need. The hair dryer on the bottom shelf hasn't been used in decades, the Netti Pot in years.

LET IT ALL GO, WOMAN!
Well, I'd still have to put the towels on something. And all of those creams and lotions that no one ever uses along with the nail polish and nail polish remover that maybe get used once a year. That shit has to go somewhere, right?

Well, I'm not going to deal with it tonight.

I haven't dealt with much today. I've mostly just enjoyed the sweet crisp air. It never got warmer than 60 degrees and I did pull a few weeds and about four pepper plants and did a little more thinning in the garden. I also planted another row, half of kale and half of arugula. 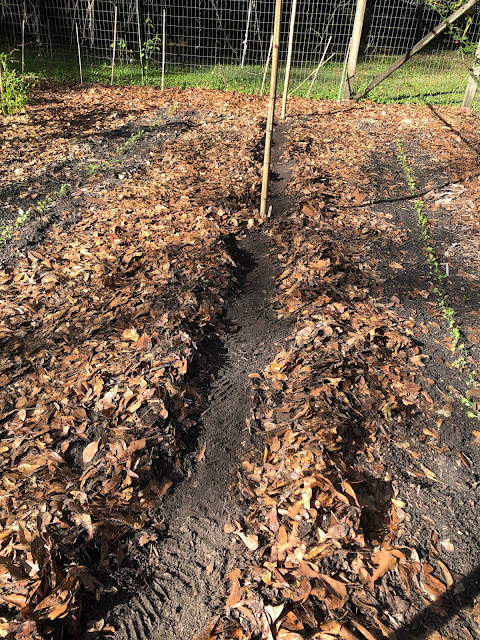 Rather boring picture, I suppose, but one full of potential. You can already tell that these greens will be coming up in nowhere near as straight a row as Mr. Moon's greens did. Ah well. Yesterday's slow, steady rains made the dirt moist and happy. Earthworms were abundant, wriggly, and unhappy to be exposed. I covered them up and begged forgiveness.

I have texted the children with the idea of having Thanksgiving here this year. We haven't done that in years. Lily has been gracefully taking it on but I'm having some sort of possibly insane itch to see everyone here at Mer and Bop's house for the dinner. If we could keep it small-ish and concentrate on fewer dishes on the menu, I think it would be nice. There's no doubt that everyone would pitch in and bring food. The Thermonster has not yet truly been challenged and this old house hasn't been filled in a long time.
We shall see.

What else? Ah, not much. The time changes tonight.
As if.
But the clocks do. Why do we continue to perpetuate this ridiculous practice?
I have no idea. It does seem like a good idea when we give ourselves an extra hour but, hmmm...let me think...okay, so tomorrow when it's this exact same time the clocks will tell me that it's only 5:09 instead of 6:09. And we will spend weeks wondering what time it is...really. And if this made any actual sense, we would not have to do that. Kids and chickens don't give a shit what the clock says. They are still going to go to sleep and wake up when their bodies tell them they should. It's just us adult humans who will have to deal with the fall-out. And although it will be nice to wake up at 7:30 instead of 8:30, having to wait to go to bed until what my body will tell me is eleven but the clock will tell me is only ten is going to suck. Poor Jessie and Vergil! Levon will be waking up at 4:30 instead of 5:30. Is that right? I think so.
Jeez.
I'm thinking now that he needs to get a job at a bakery.

One more thing I wanted to say- I heard an interview with Sir Paul McCartney yesterday (Fresh Air with Terry Gross) and he's still insinuating that Yoko Ono broke up the Beatles.
Give it a rest, Paul.
He's got a new book and a new documentary and he's out there, promoting them. Nothing wrong with that. But good Lord! Did I mention that he called the Rolling Stones a "blues cover band"?
Get this, Sir Paul- That blues cover band is out there on tour, filling arenas nightly.
Please do not misunderstand me. The Beatles were absolutely the best band in the world. There never was before and there never will be again their equal. McCarney and Lennon were incredible song-writers. Geniuses without a doubt. And I will miss and mourn for John Lennon until the day I die.
But. The Rolling Stones were and are the best rock and roll band of all time.
This is just my opinion.
Yoko has not responded to McCartney's remarks but Mick Jagger did.

Here's a picture of the firespike in the evening sun. 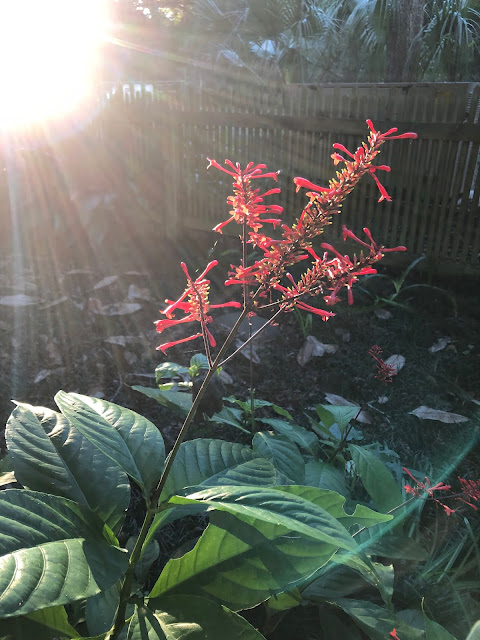