What Do The Simple Folk Do? Well, I'll Tell You 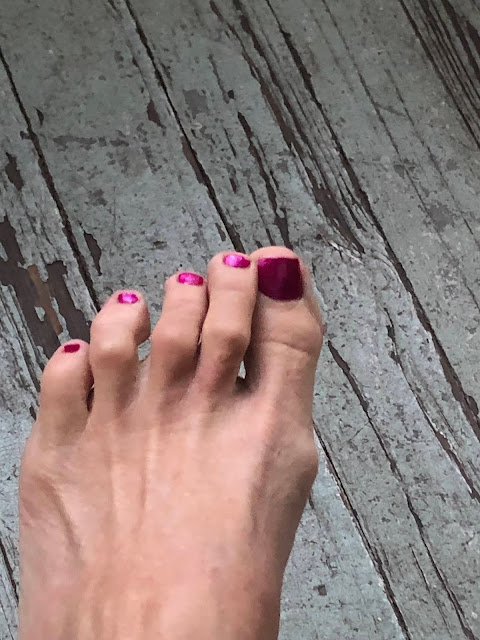 That is what my increasingly weirdly shaped toes looked like today after Jessie and I went and got pedicures. That was the Big Adventure for today. I eschewed my usual "I'm Not Really a Waitress" red by OPI and chose instead "Flashbulb Fuchsia" by the same company. I think I mostly like OPI nail polish because of the great names they choose for their colors. But I have to say that they do indeed have great colors. They live up to their name!
So to speak.
It was a busy day. I did a few chores around here before I went to town and then I picked up Jessie and we drove just a few blocks down the street to the nail salon and sat in the chairs that massage you in so many different ways and luxuriated in the pampering. Spa music was playing, a trickling piano that just sort of wandered about, being calm and rather mindless. It was heaven although I always hold so much guilt about having another human being having to deal with my calloused, gross feet. I mean- there you are, sitting in the pamper chair with a person sitting on a low stool at your feet, tending to the beast hooves that have developed over time. I always tip extravagantly but still- it's not something that really sits right with me.
Well. I suppose there are worse ways to make a living. I mean- someone has to open those Cologuard boxes and deal with human excrement for eight hours a day, five days a week. Lord, I hope they pay those people well.

Mr. Moon had to go to town to get new tires on a vehicle and Jessie and I picked him up at the tire place and we all went to lunch at a new Korean/Mexican place.
Ya know? I'm not sure that's the best idea yet. It was...okay. I got Korean tacos and I have my doubts about how long this place is going to last unless they have unbelievable drink specials or something and I'm not sure even THAT would help.
But it was fun, anyway, and I dropped off Jessie at her house so that she could go get Levon at his little school and I took Mr. Moon to pick up his car with its new "shoes" as he said, and then we signed some papers...
Blah, blah, blah.
I stopped by Costco on my way home and made the foolish mistake of not getting a cart because I only needed a few things, forgetting that even a few things at Costco are going to be HUGE so I struggled with my fifty pounds of pears and twenty pounds of bacon and five pounds of shrimp and so forth and got a dang cart when I left to get to the car. Costco is a world unto its own, isn't it? There may have been some hyperbole there which does not take away the fact that I did indeed struggle.
And then later on, when Mr. Moon got home, I had to give him a ride back into town as he was buying a car from a very sweet lady. And now we're both home and he's going to a basketball game tonight. I will heat him up some soup and make him a toasted cheese sandwich and then I will eat my leftover gumbo after which I will work on my latest mending project which is patching a nightgown that I wore to pieces. I've had three of these nightgowns. I love them so much. The color, the design, the softness. And now I can't find them to buy anywhere but luckily, I've kept all of them and can use one for spare parts to patch the other two. Once again I am doing a sort of wabi-sabi stitching and I am thinking of how my mother prided herself on her almost-invisible mending. She was an excellent needle-worker in all regards but obviously, I am not cut from the same...cloth. 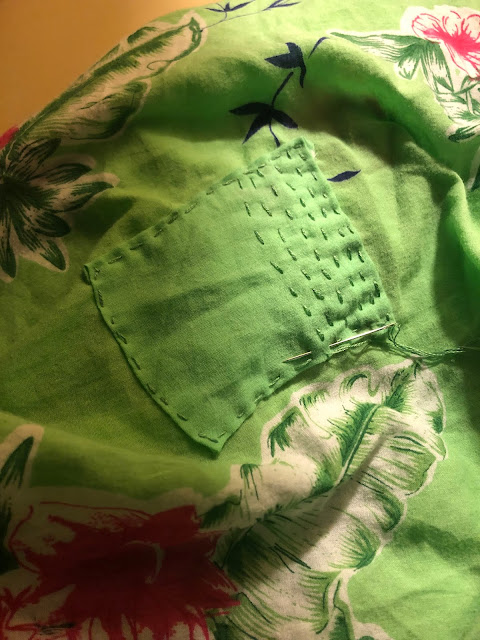 One of my favorite pairs of overalls has developed a rip and I am almost beside myself with joyous anticipation to begin patching those.
I suppose that one of these days I should get a life.
Meanwhile, I am listening to this on my phone. 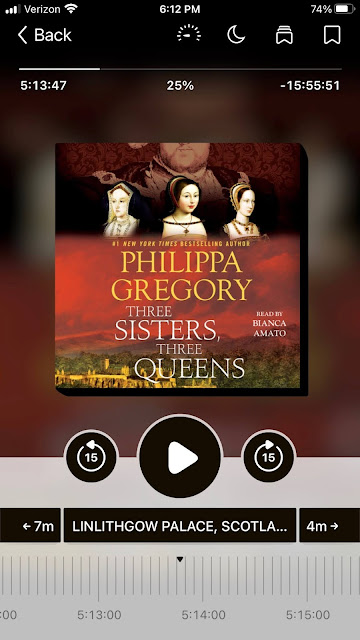 I have to tell you that few pleasures in life equal the pleasure I get from listening to a book by Philippa Gregory narrated by Bianca Amato. I thought I'd heard all of them but no, I have not. And it's 21 hours and 9 minutes long of listening enjoyment!
Ooh boy.
Life is good.
Love...Ms. Moon