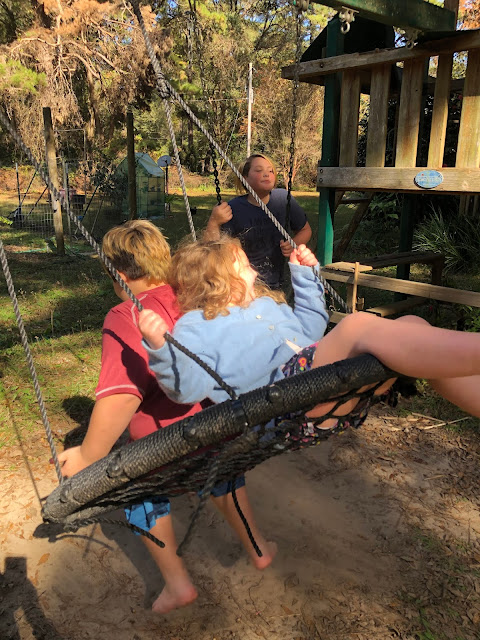 Lily texted me this morning to say that Maggie was snuffling and had a little fever and did I still want to come over to stay with the kids for a little while?
Jesus Christ. This old brain of mine had completely forgotten that we'd discussed this on Sunday. As in- day before yesterday.
I told her I would be fine and I will be. Hell, I've been around August and Levon and they've had what was probably the same thing. So off I went at noon to hang out with my Hartmann grands who needed an official adult to watch them in-between Lauren leaving for work and Lily getting home. Driving over there was a treat because it's so beautiful here right now. Gorgeous skies and leaves putting on their fall colors.

Owen promised Lauren before she left that he would make lunch for all of them and he did. He made ramen noodles and I was so proud of him when he told Maggie- now you drink the broth this time. It'll be good for you because you're sick!
And she listened to her big brother.
While they were eating, Gibson and Maggie tried to teach me how to play Labyrinth and then Owen chimed in and even with all of their help and reading the instructions, I was still a bit vague about it. I finally said, "Let's go outside, it's too pretty to stay indoors." They all agreed that that was a fine idea because Maggie was accusing Owen and Gibson of being wrong in their stupid rules and they were telling her she was cheating and, well...let's go outside!

It was cool out and Maggie said she wasn't cold but I knew she had to be so I took off my moth-eaten cashmere sweater and buttoned it around her and she loved that because it was so soft. She did so much swinging. 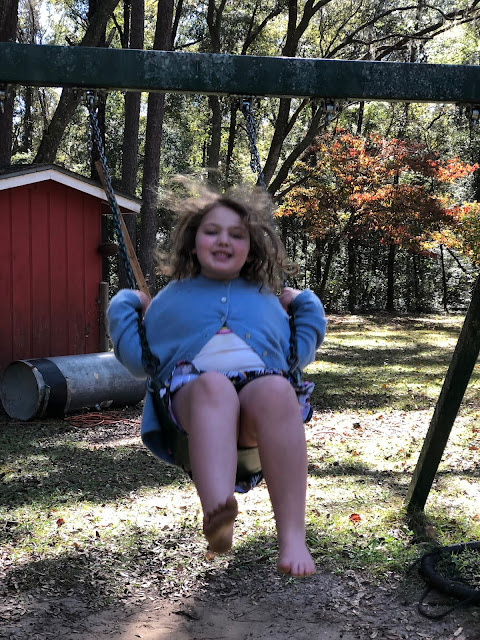 Gibson had to show me how brave he was by sticking his feet in the above-ground pool they got this summer from Lauren's parents. 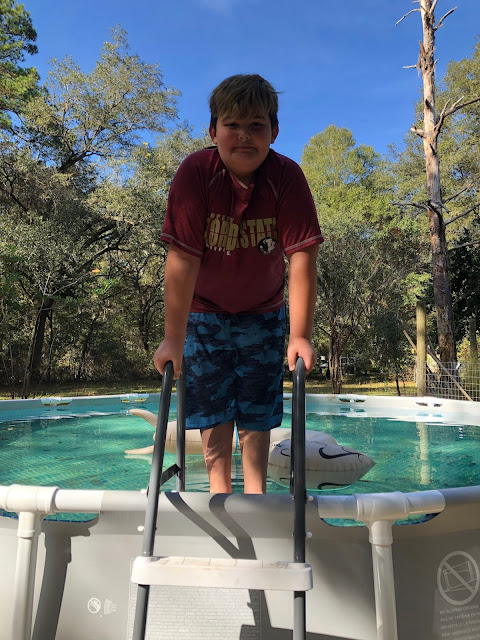 Sorry I got the light all messed up. But you can see how blue the sky was.
So we had a good time and then we went back inside and Maggie let me cuddle her and read the Little Golden Book of "Heidi" which brought back all of the emotions I used to feel when I read that dang book in its entirety over and over as a little girl. I almost had to swallow a sob today when I got to the part where Heidi gets to return to the mountain, her beloved grandfather, Peter, and the goats.
And then Lily got home and I came back to my house and made two pies. 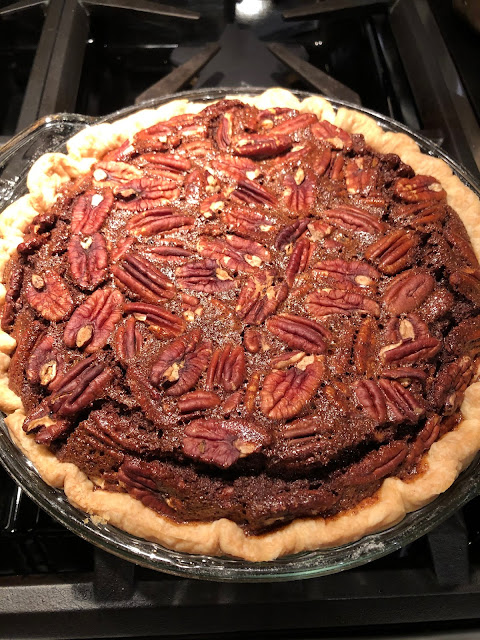 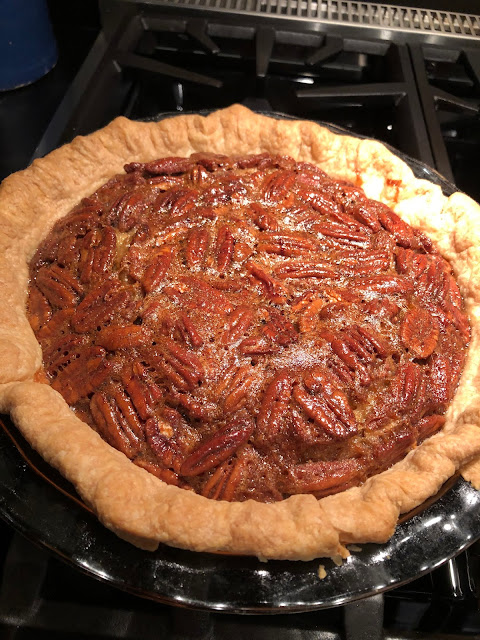 To the untrained eye I am sure they both just look like pecan pies but the top one is a chocolate pecan pie, made from Granny Matthew's recipe, so tattered and faded that I can barely read it now. The lower one is a new recipe from the NYT's cooking app and it's a maple-honey pecan pie.

Somehow I thought I was going to get a lot more done today than I did but hell- I have a whole 'nother day to get busy. I'll get the turkey and the pork out of the refrigerator in the garage and let them sit in the kitchen all day and they still probably won't thaw but they won't be quite as frozen on Thursday. I have to make my cornbread for the stuffing and boil eggs which I really do not have enough of for all of our deviled egg needs because my hens have been slacking. The pies alone took seven. Eggs. Not chickens. I should tidy up the house. Jessie asked me the other day if I wanted her to come over and help me do a little cleaning. I was completely mystified by her offer.
"Clean?" I asked. "For who? For what?"
Hopefully we'll be eating outside but I suppose I could do a little fluff and stuff, as Lis calls it. No matter what I do or don't do, it's going to be complete chaos within five minutes of everyone getting here with so many toys scattered about that no one will even be able to see the dust.
That's my theory, anyway.
It's been a very nice day all around. Mr. Moon has recovered nicely and THAT ordeal is over with and I got to play with some of my babies and I do not hate Thanksgiving. It's all about family and food and that's pretty much my life so it's all good.
Talk to me Thursday and you may hear a different story but for now, it's all pretty sweet.
Oh hell. I forgot to buy rum.
Sigh.
Love...Ms. Moon
Posted by Ms. Moon at 6:17 PM