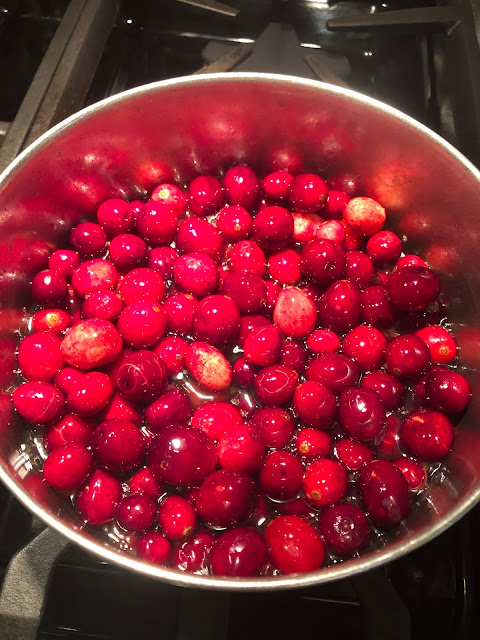 I really do love cranberry sauce in all of its many versions but I think the thing about the fruit that brings me most joy is the color. I mean- look at that! Scarlet as can be. And then, when they are cooked they turn into rubies. Both forms are gorgeous. I know there are many people who choose the canned sauce because of the deep ritual of it and that is fine with me but I need to make my own just because of the color and the lovely pop of the berries as they cook with the sugar and water. I made my sauce this morning before we left to go to Mr. Moon's appointment and now it is in the refrigerator, waiting for its place on the Thanksgiving table.

The procedure went well. He had a colonoscopy AND endoscopy as he suffers heartburn. The colonoscopy looked fine but he has to double up on his heartburn medicine for three months and return to get that looked at again. As the doctor said, "Go home and do some healing."
The whole thing did not take very long except for waiting for the doctor to come and give us his two minute (if that) report. But the anesthesia they give for the procedures is pretty intense and my husband needed every minute he got to truly wake up. Or sort of wake up. He woke up enough to want a Popeye's spicy chicken sandwich and despite my better judgement on that, that's what he got. I was not about to argue at that point.
I drove him home as carefully and smoothly as I could and he slept most of the way, came in, got into his chair, and slept some more. As I recall from when I got a colonoscopy, I hated that part of it- losing a long period of memory, knowing I had been talking and interacting and not remembering a bit of it. I kept asking my husband later- did I really see the doctor? Did he really say everything was okay?

I'm going to make him a nice creamy cashew butternut and sweet potato soup. I've had a butternut squash just waiting to be honored in such a way. It is a good soup. A very good soup.

It's been a long day but it's gone okay. I hope I remember the guy who was waiting for his wife's procedure to be over in the waiting room who was seated near me. He had asked Mr. Moon how tall he was and we ended up going at the same time to pull our cars up to the door for our spouse-patients to be wheeled out. Turns out we've both been married for thirty-seven years and we had a little chat in the elevator.
"You have a good life!" he said, as we parted in the parking lot.
"You too!" I said.
It felt a little like a blessing.
Having my husband come through the procedure well is an even greater one. 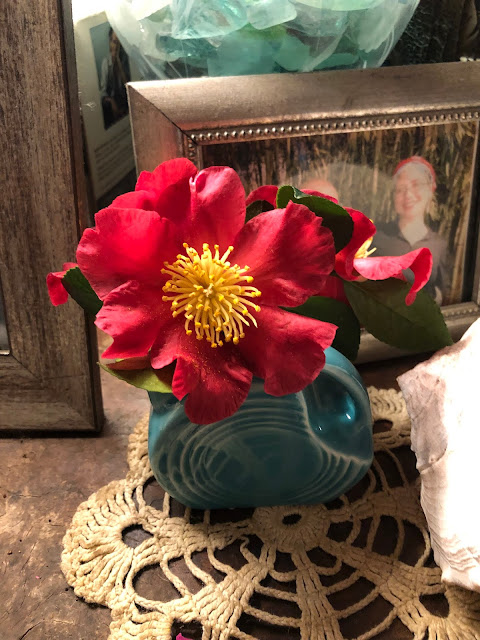 I believe it is called Yuletide. 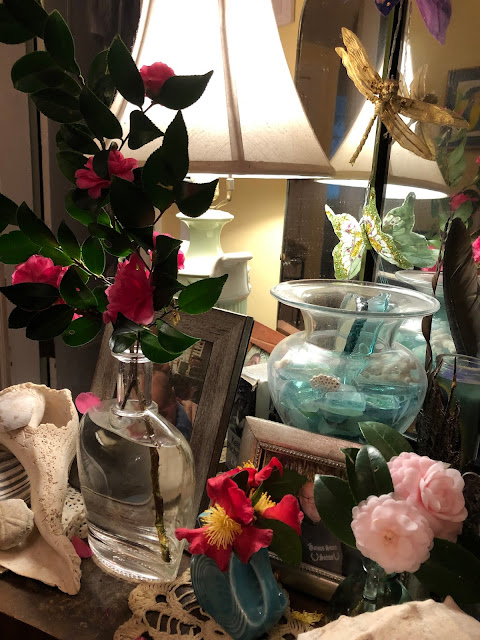 The sort-of altar table in the hallway where there will be camellias from now until spring.
Another blessing, for sure.
Love...Ms. Moon