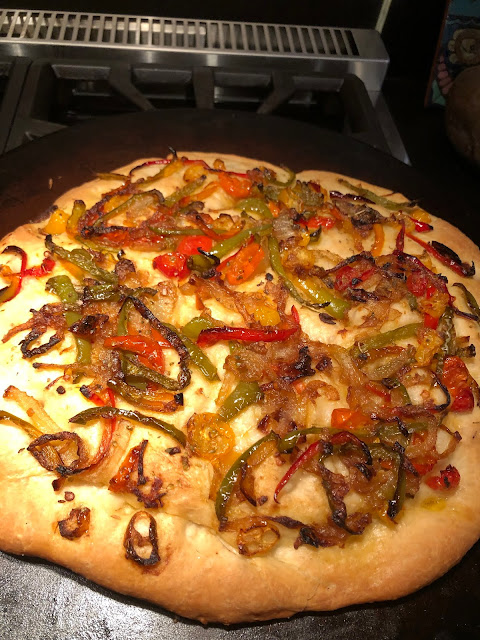 Oh, y'all! I feel I may have scared some of you at the thought of getting your boosters! I need to reassure you that it wasn't that bad. I mean, nothing like the flu where even your hair and teeth hurt. It was not agonizing nor was it painful. I was just a bit achy and so very, very tired with a few chills and probably a little fever. As I said in response to a comment- a guilt-free day spent in bed is not so bad! In fact, by last evening, I made that lovely focaccia you see in the picture so how bad could it have been?

I went to bed relatively early (again- no sacrifice for me) and finished the Auroville book. I'm still not quite sure why the couple moved back. There was no real defining reason, it seems to me, but more of a desire to allow their children to grow up in a freer and more natural setting along with their hopes to try and figure out some of the reasons for the deaths of the wife's mother and stepfather, which I think is quite brave of her. Her childhood was traumatic, to say the least, and for her to attempt to go back and understand the basis for some of those traumas shows a lot of strength. And there are no rules in Auroville about accepting the philosophy of the founding Mother. So there is that.
Still, it's not something I would want to do although I guess I have some understanding of it when I think of how much I love Roseland which was a place where I, as a child, suffered greatly in many ways, and yet love to this day because even as I experienced horrible things, the river, the woods, the trees- these things gave me solace and I always had a strong sense that Roseland itself was not the source of my pain.

This is why I don't do book reviews, I suppose. I have a tendency to insert myself into the stories but honestly- how else can one view a story except through the lens of one's own life and experiences? This is why a book that may ring true and clear to one person is a muggled mess to someone else. Of course, some books are sheer entertainment and that, too, is fine.

Anyway...I slept a good long time last night but with insane (even for me) dreams including one that found me left behind at Costco after closing and somehow, that dream was the scariest and weirdest of all. The feeling I had when I realized that the store was empty and dark and I was alone was so eerie even though the exit was still open! And then I had to find my car...
Well. I can't explain why that dream affected me so but it did. I was very grateful to wake up and watch it all dissolve in the morning light as I comforted myself by scratching Jack's head.

And I've felt mostly fine today. Not quite 100% but close. I didn't do much though. It's been one of those days that simply floats by. I did a little mending, some of which displeased me so that I've pulled out the stitches. I made an apple fritter cake that a friend recommended from the King Arthur website. It is cooling now. I had apples I needed to use up and now I have. Mostly it's just been a day of contentment, stillness and ease. I have doors and windows open so that I haven't felt closed-in at all. Right now I'm on the back porch and as usual at this time of day, the chickens are rustling through the fallen magnolia leaves which are so sturdy that they do not truly disappear for years. I know that they are the bane of some people's lives and they rake them and curse but we just leave them where they fall and I love their sound as my chickens scratch them about.

So it goes, so it goes. The sinking sun is painting the oak trees by the railroad tracks golden, the firespike just beyond the porch neon crimson. This is one of those plain, simple days that on my deathbed I would hope to look back on as a perfect example of the perfection of life although it has been so simple and non-eventful that it probably won't even register as a memory.
And that says so very much.