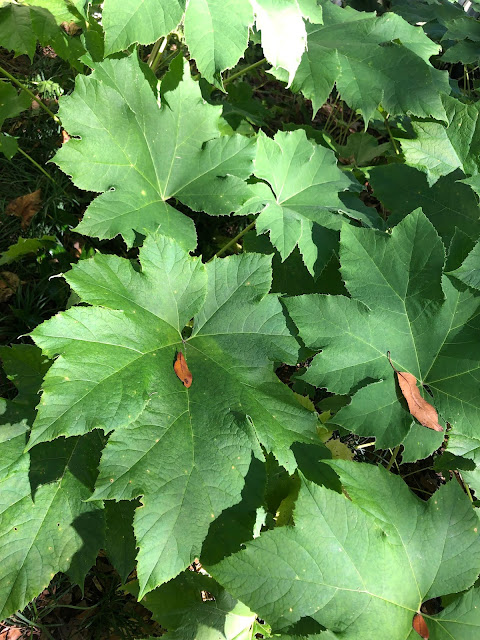 Here you have the Chinese rice paper plant, Tetrapanax Papyrifer. It is, as they say, a showy plant, an exotic and dramatic addition to your landscaping.

It is also a plant from hell when introduced here in North Florida as it multiplies by suckers and although relatively easy to pull up, especially when young, those sucker roots do not come up when you pull the plants and as far as I know, you never really get rid of them.
Just one more GD invasive growing in this yard which I'm sure seemed like a good idea when they were planted.
The plants are also covered with a dust that flies up from them when you pull them, going directly into your nose and throat, irritating everything in those passages, resulting in coughing and sneezing. Masks are required when removing them.

Anyway, today I got all of the ones I could see although I am under no delusions that they won't be popping up babies soon. If not now, then definitely in spring. 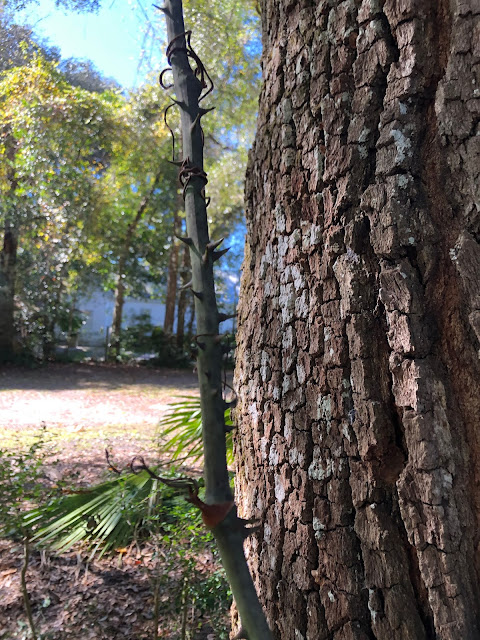 I believe this is a smilax vine but I just call them a fucking scary plant. There are smaller varieties than this which are mostly just very, very annoying as they just grab you and pierce your skin with their little prickles but as you can see from the picture above, you could use one of those vines to kill someone with. Well, if you wanted to kill someone slowly and extremely painfully. I don't even try to dig those things up. I just slice into the root with a shovel and then pull the vine down from the tree and electric lines it crawls along. They can get to be at least twelve feet long in my experience. So I cut and pulled a few of those too.

So that's mostly what I did today, filling up the garden cart and taking the pulled and cut plants to the burn pile because you cannot just leave those paper plants to compost because you will soon have an entire jungle patch of them. This is true of all of the invasives. They just really want to live.
And don't we all?

While I worked, my little tiger girl kept me company for awhile. 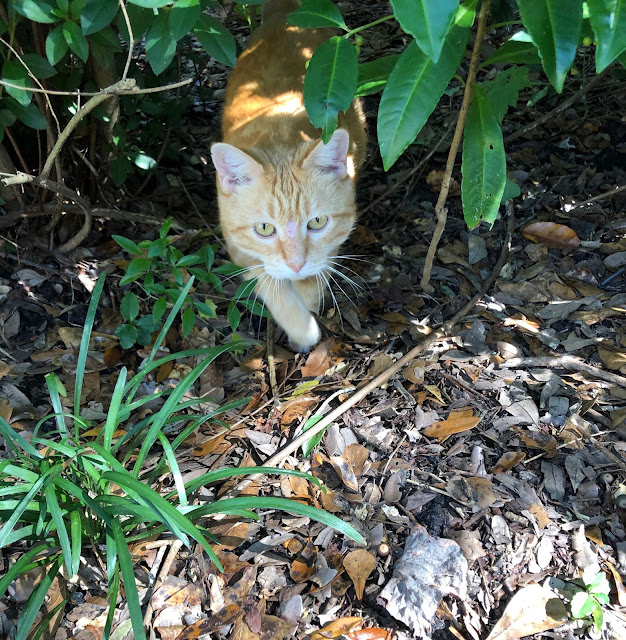 I was glad to see her. She has lately become most enamored of Mr. Moon, joining him in his chair every time he sits down in it.
"Maurice," he says to her, "This is becoming a bad habit."
"Shut-up," she snarls.
I'm sure that's what she's saying. If I have the effrontery to lean in to kiss my husband, she snarls at me and often jumps off the chair and races from the room as if to tell me that I have ruined everything.
She's like a twelve-year old girl, stuck in constant rage at Mom. So it was nice that she came to witness my efforts in the yard although who knows? She may have just been laughing at me.
While I was working, Pinot strode by. I pulled my mask down and said, "Hey!" and he did not even look at me.
What the hell have I done to piss him off? I have no idea.
So it goes in Lloyd and I am feeling as if my nerves are frayed and sparking with electricity. Tomorrow I have a mammogram at 11:25 which is really not a big deal. For whatever reason I don't have quite the anxiety about getting my bosoms smushed between two plates and shot through with radiation as I do about, oh- getting the results of bloodwork at my annual physical exam. But it IS a medical procedure and I WILL be going to that medical procedure building and of course there always is the possibility that all is not well with my bosoms although I think they're fine.
As I have said so many times, I am just crazy.
There is absolutely more that I am feeling anxious about but that has everything to do with my social anxiety and nothing to do with bloodwork or tit-squishing. I will go into that as the week progresses.
Honestly, all is very well and I am already adjusted to the time change as I demonstrated by waking up at 8:30 (new time) this morning. The crazy dream of that sleep was being in a water aerobics or possibly water yoga class with my husband and Bill Murray. That was pretty fun. No Mormons were involved.
I am glad to have gotten those plants out of the yard, even if they will magically reappear and I have further tried to deal with my anxiety by making a soup of venison, sweet potatoes, and vegetables. I also got to talk to Lis and that was a pleasure of the highest order. So my soup is simmering, I have a Dutch oven full of sourdough bread baking and once again, my husband is in the deer stand. He came home empty-handed and empty-trucked last night so we shall see how it goes tonight. Will he catch a deer as I insist on saying?
Who knows? Not me.
I guess that's all I have to say for now.
Love...Ms. Moon 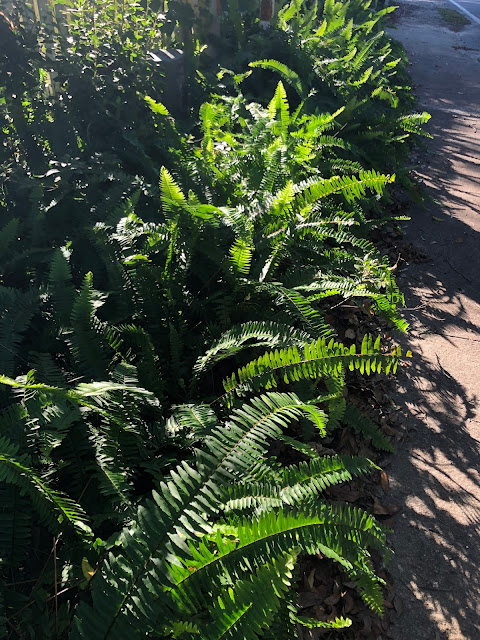 Ferns which are not invasive because I say so.
Posted by Ms. Moon at 6:35 PM