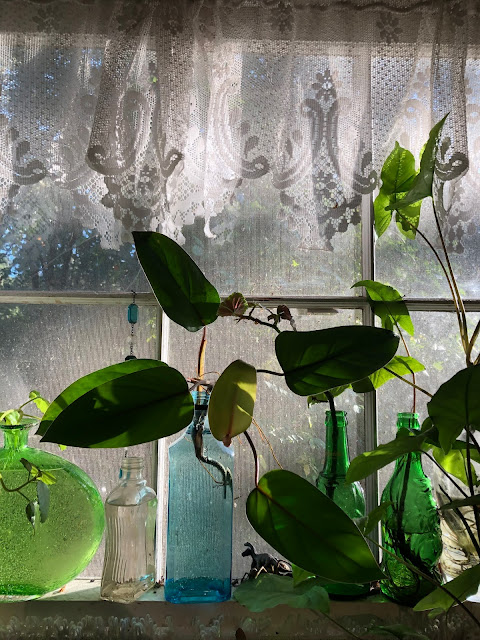 The window in the little area off of the kitchen is catching the late afternoon light now and I keep bottles with plants rooting there. It is one of my favorite pieces of eye candy in the house. My house has plenty of spots that I don't really care to look at- baseboards rimmed with Lloyd's black dust, peeling ceilings, the cracking, settling wall in the kitchen...
Oh. I could go on.
But there are places in the house that I do receive pleasure from every time I walk by them. The baby plant nursery in the laundry room is one of them, our bed, made up with cozy-looking covers, my hallway "altar" where I have my favorite Virgin of Guadalupe, seashells, pictures of the children. The window in the bathroom is another place that I like to look at. It took me years to finally yank down the stupid ugly blinds in there and make a pretty curtain out of two different vintage tablecloths and it makes me happy to see that every time I go in that bathroom which is frequently. I have plants rooting in bottles on that window sill too.

Anyway, I'm partially on this tangent because I think that Mr. Moon is going to create an office of sorts in the bedroom we've been sleeping in for quite awhile and we will move back into our old bedroom. This means we have to buy a mattress for the bed in there because the one that's there is horrible and the one we sleep on now is wonderful but it weighs approximately six hundred pounds and we've been planning to replace the other one for quite awhile and now's the time! Motivation! This will also entail putting a piece of furniture that's in our now-bedroom into the laundry room which will look a great deal better than the card table that's in there now where I fold clothes.
You know how it is- you change one tiny thing and the next minute you're redecorating the entire house and taking out walls and putting in a swimming pool.
I wish.

Jessie and Levon came out today which was lovely. Jessie had some gumbo and Levon had some soup and some macaroni and cheese and a honey and peanut butter and raisin sandwich. I ate my yesterday's leftovers and we all enjoyed sitting on the porch. Mr. Moon came in from the funeral just as we were about to sit down and he joined us.
"How was the funeral?" I asked.
"It was a funeral," he said.
"Was Jesus mentioned?" I asked.
"That name did come up," he said.
But he learned a lot of interesting things about the woman and that's always nice.

Levon wanted to play cards but then he changed his mind and wanted to put together a puzzle so we started that and then he wanted to put the tepee up in the middle of our puzzle-doing. He told me he just wanted to lay down in it and pretend to sleep.
It's the easiest thing to put up in the world and so Jessie and I did that for him and when they left I told her not to put the puzzle up because GODDAMMIT! I was going to finish it.
It's a dinosaur puzzle with all of 48 pieces. You will be pleased to hear that I did finish it. I am the world's worst jigsaw puzzler.

Mr. Moon is getting a colonoscopy next Monday and he's not supposed to eat a whole list of things before then including nuts and raw vegetables. Forget salads, I guess. Salads are part of our supper five nights out of seven so this is going to be a tough week.

And that's about all the news from Lloyd. Life is proceeding in its normal way. Oh! I made the cranberry/orange/apple/pecan relish for Thanksgiving. We still don't know where we're all going to get together but there WILL be cranberry relish. If the menu was entirely made up of that and turkey and dressing with gravy, I would be completely satisfied.
As we all know, that won't be happening.
Sigh.