We Go On As Best We Can 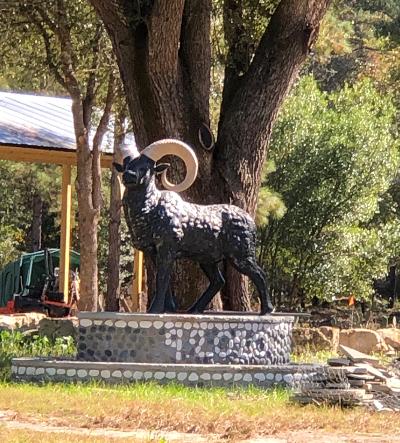 There's the ram statue down the road from us at what I call, "El Rancho." I have no idea what the numbers signify. Could be the address for all I know. But it's looking quite spiffy, isn't it? I would not be surprised to see flowers planted around it at some point. As I passed by today, I also saw two beautiful, huge black cows, resting under the trees. "Hello!" I called in my saying-hello-to-cows voice. They looked at me with fierce indifference which sounds like an oxymoron but I swear it is not when it comes to these cows.
Or cats.

It did not please me nearly as much to see the two Trump signs that I'd pulled out of the dirt and laid down on public property a few weeks ago, now re-erected.
I pulled them again and laid them back down but on my way to town I noted that one of them had been put back up. Why only one? I need to either let that shit go or be really evil and dispose of the signs but in my innocent and crazy heart, that would be theft.
Which I am no good at.

And yes, I did go to town and it was terrible. I really did make an effort last week to get everything we'd need for Thanksgiving so that I didn't have to go in this week but of course that came to naught. Thanksgiving really is covered but Mr. Moon is going to drive up to Tennessee on Monday to hunt with an old, old friend and both of them are being tested for Covid and they are going to isolate when they're not in the woods and it was suggested to me that if I made a huge pot of chili, they could eat on that for days, thus cutting down on their trips out to procure food.
What's a good wife to do?
I bought all the stuff I need to make that huge pot of chili and also a lot of snacks so that my husband doesn't have to stop on the road as often and if I'm in a particularly good mood this weekend, I may even make him cookies to take.
I really am a very fine wife. But honestly, he is the finest husband.
When he told me about the trip I was of course worried about the covid situation. Still, I think they will be as safe as they can be. And generally, when he goes off to hunt I feel as if I'm on a little vacation of my own. I love being alone and rarely get lonely but I am so very used to having him around now that I actually teared up at the thought of him being gone.
It'll be okay. And I will still see Jessie and the boys and also Lily and her children for backyard visits.

Speaking of- Jessie and Vergil are going to spend the night tomorrow so that we can get up early and start cooking Thursday morning and the guyfolk can do projects or whatever it is that they want to do. Jessie said that this morning the boys heard her and Vergil talking about this plan and immediately rushed to get ready. 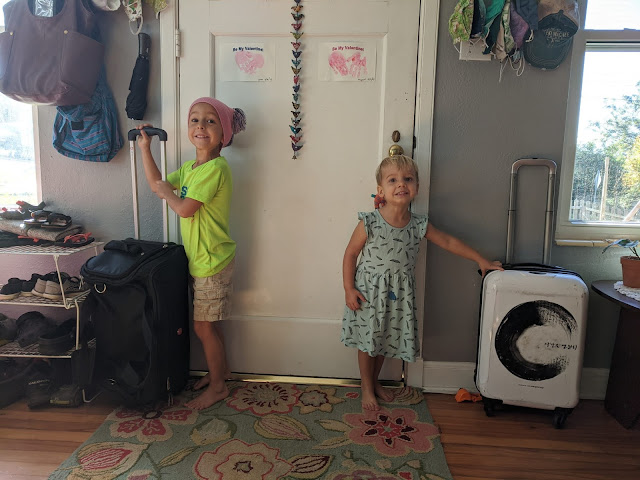 "That's a lot of luggage," I texted her.
"It's all stuffed animals and trucks," she texted back.
Aren't they the little style mavens?
Yes. Yes they are.
So Costco was okay and Brenda, she of the beautiful mermaid eyeshadow, was wearing a gold sequined mask. I love that woman. Publix was horrible, though. So many people and I should not have even been there but I was NOT going to go on Friday or Saturday or Sunday either. I raced about and got my chili stuff and snack stuff and other stuff and got out of there as quickly as I could. I honestly felt like I was going to have a panic attack right there and did indeed get all hot and sweaty and spacey but I managed to escape.
So that was my day and I'm making split pea soup and for some reason the split peas are taking forever to cook so I guess they're as ancient as Egypt. Hell, I even soaked them which you do not generally need to do.
Tomorrow will be boiling giblets day and making cornbread for stuffing day and making Mrs. Matthew's chocolate pecan pie day and so on and so forth. And even though so much will be the same, so much will be different. We certainly will not be going out tomorrow night to hear music which is the traditional thing for us to do but maybe we can do a little hallway dancing.
And maybe Mr. Moon will get me a bottle of dark rum tomorrow when he has to go to town so that I can have my yum-rum sip and toast to my dear Lynn with whom I shared that tradition for so many years on so many Thanksgiving mornings and I will say, "Whoop-Ai-Ay!" as she always said and then I'll go baste my turkey.
Love...Ms. Moon
Posted by Ms. Moon at 6:30 PM