We Get A Visit From A Three-Year Old 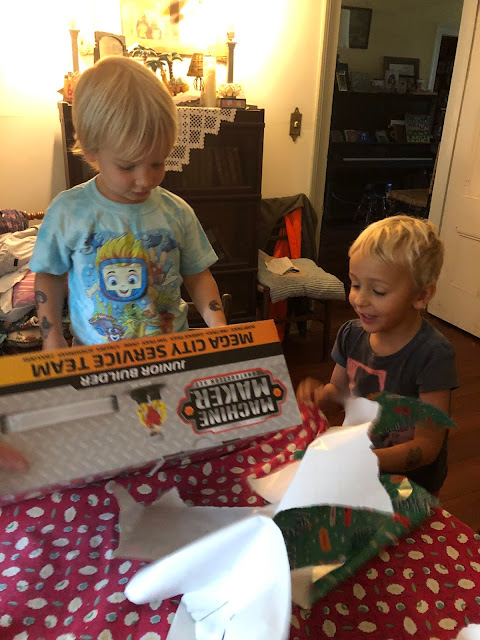 Right before Vergil was to come home from North Carolina, some of his mountain family had a few flu-like symptoms and so his brother-in-law got tested but it was going to take a few days to get results. Of course this worried everyone and made Vergil wonder if he should come home before the test results were received but he and Jessie decided he should come on and they'd isolate until they found out if covid was involved. This meant to us that we couldn't see Levon on his birthday but yesterday the test showed negative and so Jessie brought the boys out this morning.

They ran for the house and August immediately found them on the dining room table where I'd just wrapped them. We all gathered around and Levon tore into his big present with August helping. I'd gotten the boy a set of trucks that you have to put together with a big screwdriver that came with all the other stuff and there were stickers to put on the various vehicles and the crane. There was a crane. And boulders for the crane to pick up and put into the dump truck. There was a fire engine and a tow truck and a garbage truck and the dump truck. Maybe something else. I can't remember. And little guys to go into the various trucks.
So many pieces. 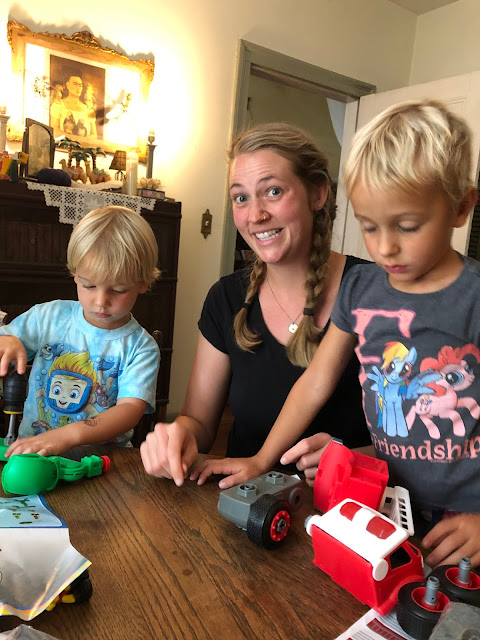 Jessie's reaction to so many pieces.
But between those three and Boppy, they got those trucks and the crane built and all the stickers applied properly in short order. 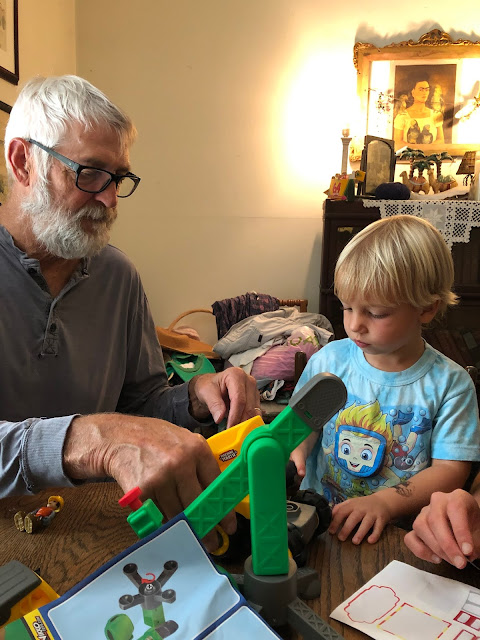 I just watched. I was quite surprised and pleased, too, that Levon shared his new present so willingly with August. They passed the screwdriver back and forth between them. August's present was a set of Little Critter I Can Read books. He's coming right along with learning the sounds that letters make and putting them together into recognizing words. His mama and daddy are helping him with that and it won't be long until he's reading, I think.
After the trucks had all been put together some other stuff went on and then Jessie took orders from all of us and phoned them in to the Hilltop and went picked up our lunch and it was so fun to eat their delicious, salty, fried foods. And then, because it had been Levon's birthday, I had gotten a treat yesterday at Publix. As we've been reading Babar books, we've seen pictures of eclairs and because we spend a lot of time discussing the pictures in the books they now know what eclairs are but they'd never had any. August had been asking me if I could make some and I said I could probably buy some and yesterday, at Publix, I was so happy to remember that and to find a tidy little box of four neat chocolate eclairs.
I put each one on a plate and served them out and the boys have now had chocolate eclairs and they like them very much. These particular eclairs had a very generous amount of cream inside of them and I wish I'd gotten a picture of the boys eating them, each with his own technique. Jessie ate half of hers and Boppy put his in the refrigerator for later. I had a bite of Jessie's and I declare that the eclairs were fine indeed.
After a wash-up, Levon took me by the hand and said, "Can we read books now?" and led me to the library and we read books. 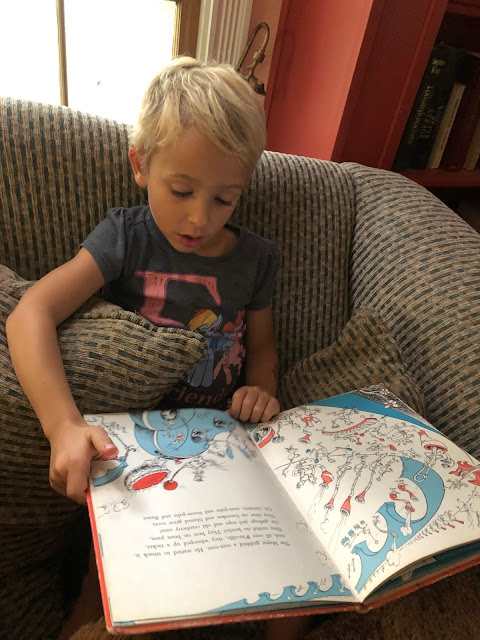 "Oh boys," I sighed. "I would like to read books to you all day long."
And I would.
After they left Mr. Moon and I felt lazy. I think I'm having a reaction from the flu shot I got yesterday. My arm and shoulder have been sore since last night and I've just felt...tired. But yesterday I did something CRAZY which was to buy an entire new set of stainless silverware (oxymoron?) at Costco to replace the things we've been eating with forever which are a mixture of things I'd bought at Publix years ago during a promotion, a few things from Mr. Moon's first marriage, some of my grandmother's old stainless, another grandmother's actual silver, and those random things that pop up out of nowhere. I'd been looking at new sets forever and finally yesterday I just decided to go for it and this afternoon I cleared out the silverware drawer and put a lot of old utensils in one bag to give away and the silver in another bag to store because I need to keep it. That grandmother's name was Mary Miller so her monogram works for me too. I've got the new stuff in the dishwasher and I can't tell you how excited I am to use it. I suppose we could call that our anniversary present.
While I was clearing things out, I tackled the huge drawer in my kitchen hutch where I have first aid supplies and OTC medicines like Benadryl, Sudafed, and god knows what all. Also many boxes of band-aids and gauze pads, thermometers- one digital and one an old-fashioned glass one because it still works and doesn't need batteries, and countless tubes of antibiotic ointment and Benadryl cream. I threw away the oldest stuff and cleaned the drawer and organized the things I kept. That feels good too.
A neighbor who had surgery yesterday asked me if I'd come over and help her with her incision dressing and I did that and honestly, it felt good to help someone, to feel like I had a little knowledge to share. "Little" being the key word, but still...
And so it's been a really, really good day. And now it's time to go put the new forks and spoons and knives into their clean organizer and make our supper. I've picked enough greens for an entire salad and I'm so looking forward to that.
We've watched two episodes of "The Queen's Gambit" and I'm hooked. GOOD series, for sure and we'll watch another episode tonight.
I have no idea what evil Trump has gotten into today and right this second, I don't care. I don't think that Hurricane Eta is going to affect us much except for some rain and we need that.
For the moment I can say- all is well. I hope it is for you too.
Love...Ms. Moon
Posted by Ms. Moon at 6:19 PM