The Most Prosaic Of Days 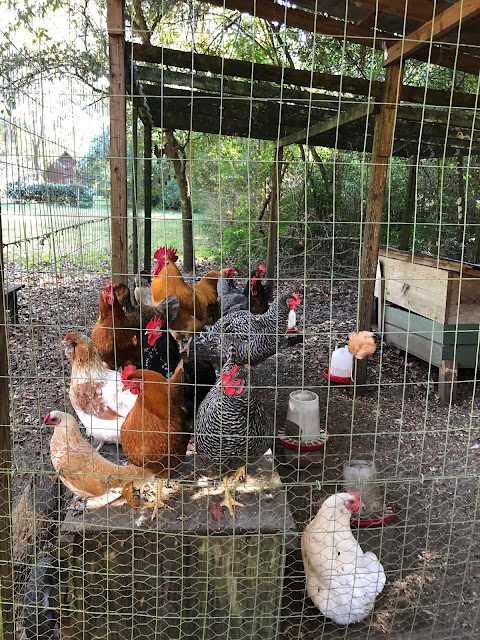 This is the sight that greeted me this morning when I went to let the chickens out of the coop. It delighted me- I rarely see them all that close together in one big gathering. But there they are. Miss Darla was actually on a nest so she's not represented there but her sister Dottie is. She's the white one on the ground. I have no idea why they decided to all clump together on that baby coop but then again, there is so much that is still quite mysterious to me about chickens and their behaviors and society.

I've been pretty good about my walking this week and I walked again today. Instead of the usual route I take for my middle mile down to the Rancho across from Emma and Jacob's, I went down a little dirt road called Sandy Acres that is almost exactly a half mile in length and it was nice to take a different path. And I met this guy. 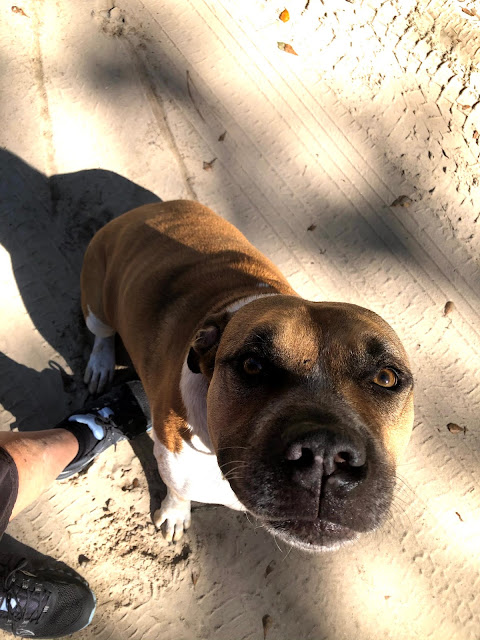 Dogs are not always walkers' friends. I have been bitten once by an unrestrained dog on my walks and threatened many times. I have had to change my routes due to dogs and I understand fully that walking in rural areas carries with it the threat of overly territorial dogs. It's one of the reasons I carry a light walking stick. So when this doggo started wuffing at me this morning I was, for a second, a little worried but then I immediately sensed that he was a darling, a sweetheart, a big old cement-block-headed bull dog with nothing but love on his mind. He trotted out into the road and wagged his whole body and I scratched his head. He lay down and showed me his belly to make sure I knew he was a friend and I petted and scratched him some more and baby-talked to him which he seemed to love. I've had bull dogs before and although they can turn without warning into fighting machines, 99.9% of the time they are the sweetest. They're one big muscle and almost vibrate with happiness when paid attention and affection to. I was sorry to say good-bye to him.
The rest of the day has been slow. I hung laundry on the line and made black bean soup and a loaf of sourdough which is about to go into the oven. I made up the dough for the bread last night and started soaking the beans then too. Black beans take forever to cook and even with the soaking I had to put them into the pressure cooker for half an hour to ensure that they'd be done for supper. I am still not used to the way time halts and then speeds these days. I had planned to get the soup going early but by the time I got to it, it was after two.
It's going to be cool tonight. The air conditioner is off, blessedly silent, not needed. The doors and windows are open. I'm sipping a martini, I'm going to make a salad, slice avocados and chop cilantro to go on the soup. I have onions quick-pickled in lime juice and salt, rice wine and a tiny bit of sugar.
For some reason, although it is Friday night, the church next door is dark and the dirt parking lot is empty. Birds are tweeting their good-night calls, the sky to the west shows pink in the gloaming. This is what it's like on earth, right now in the year of the Covid pandemic, in the last days of the Trump plague, at least in Lloyd, Florida. I think of all of you and where you are, some far across the country, some farther across the globe and I take a deep breath and I wish us all well and know that time and distance are not really that much of a barrier. We all want the same things, don't we?
Be safe. Keep living.
Happy Friday.
Love...Ms. Moon
Posted by Ms. Moon at 6:13 PM