Mermer Gets Visits And Is Happy 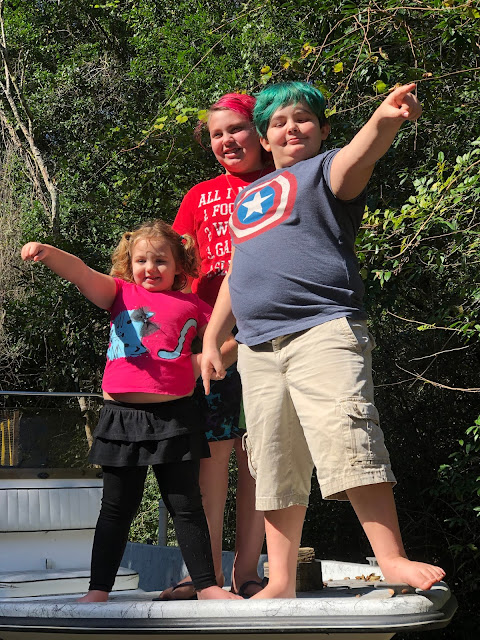 A mystical, magical, colorful crew visited me today along with their mama and we had such a nice visit. Since quarantining is still in force and with time on their hands, the boys have been having fun changing the hair on their heads. 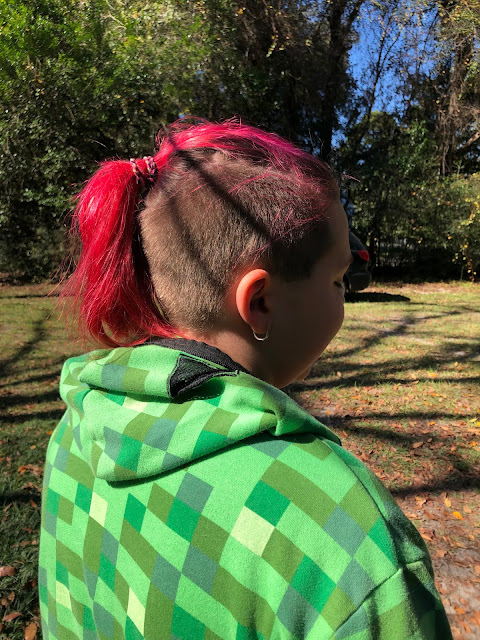 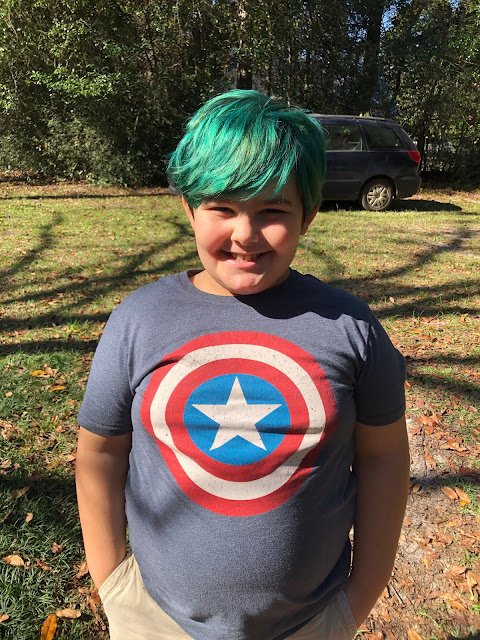 My darling boys.
We sat out in the back yard. I had made banana bread and brought that out and filled my pretty pink pitcher with ice and water and brought out the fancy matching glasses and fancy cocktail napkins and we had a little tea party of sorts.

Lily asked if she could have the pitcher and glasses when I died. This is an old joke but sort of not. I mean- I am going to die one of these days and it's gratifying to know that I have a few things that my kids want to hold on to. I said, "Of course! Or you can have them now, if you want." She said that she'd wait until the kids were older and weren't as apt to break them. Whichever is fine with me. They're not doing much good up there in the cabinet where they live. 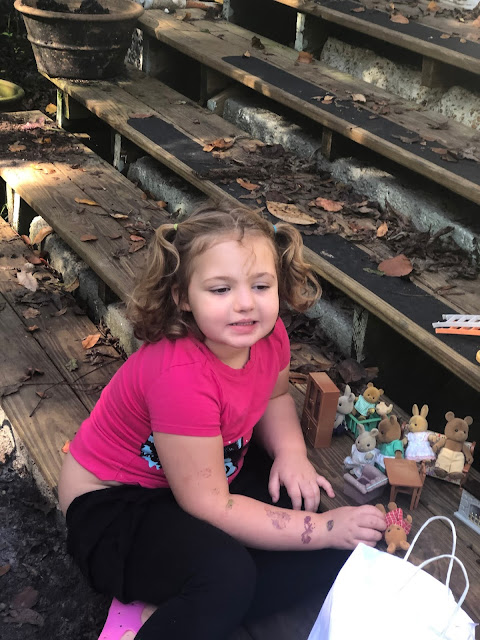 Magnolia got out her little animals and played as she always does on the back steps.
While all of this was going on, a woman I knew as a child and her brother came by. This woman was a very good friend of May's, growing up, and they were partly raised in this house. They wore masks and we were outside so I invited them in and told them to feel free to wander about as they wanted. They demurred at first but I made it quite clear that I understand this need to revisit the past and that I did not mind at all. And so they did. It made me happy. I know that they have some wonderful memories of this house and living here and some that are not so wonderful. The brother hadn't been back to the house since they left when he was still quite young. They were so kind and grateful but they paid me back for any inconvenience (which there really wasn't any of) by taking the dozen eggs that I forced upon them. They told me that the house smells just the same. I loved that.
So it was a busy afternoon and I was so happy to get to visit with my boys and my girls and by the time they had to leave, everyone had somehow managed to come into the house. Owen sat down at the center island and he got nostalgic. He spent a lot of time here as a little guy and so did Gibson. I told Owen that I'd been remembering how for lunch time I would sometimes pretend to be a waitress and give them a menu of the foods I had on offer and take their orders and make their lunches and serve them.
"I remember that!" said Owen. I have no idea how much he truly remembers about those years but I know that there will always be a part of him that will feel at home here.
After they left, I hung the picture that Maggie had brought me. 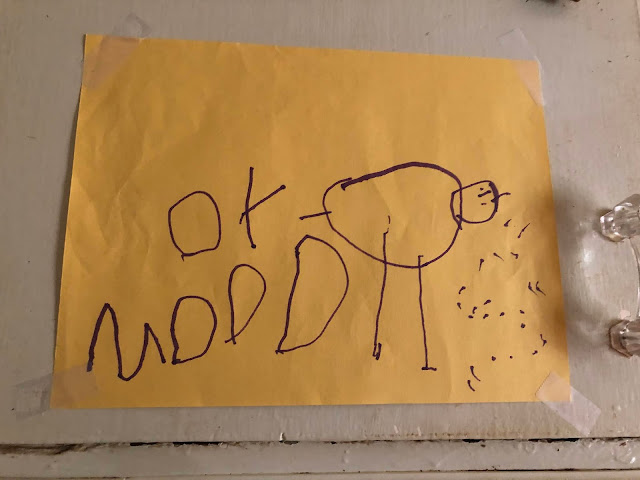 It's a chicken and I think that's supposed to say Mer which is pretty cool. August isn't the only one learning his letters. And I believe that the dots to the right of the chicken are chicken food. While we were sitting outside, Owen started giving bits of banana bread to the flock which had gathered around. Some of them even jumped for their bites and he said, "What would we do without Mer's chickens?" which tickled me to pieces. He also put a plate with crumbs on it down on the ground and as the chickens pecked at it, the plate rang with clear notes and he said, "I have my own orchestra!"
And so it was a very good day and my husband, who had gotten up at four-thirty this morning to go sit in the woods and watch the dawn came in, finally got home and took a nap in his chair and I did a crossword and went and collected eggs where I found this in the pump house nest. 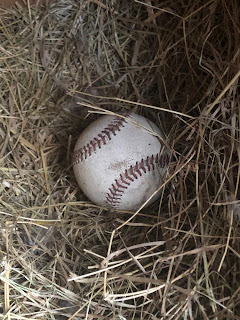 Since hens don't lay baseballs as far as I know, I suspect Ms. Magnolia June put it there because she checked for eggs at least twice. She reported that "The chickens are covering up the eggs!" and only found one which she wanted to take home and of course I let her. Lily joked that when her daddy had brought her eighteen eggs the other day she'd said, "Good! It's like you knew we were down to our last dozen!"
We got thirteen eggs in all today which is pretty good for having only fourteen laying hens.
Bless all of their sweet, funny little dinosaur hearts.
Bless your hearts too.
Love...Ms. Moon
Posted by Ms. Moon at 6:14 PM