A Little Sweetness In The Soup Is A Very Good Thing 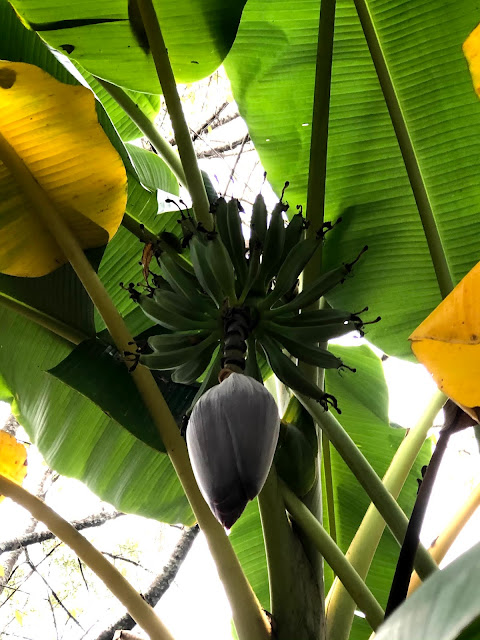 This is another picture of a banana bloom and not a good picture because the light was weird and the bloom itself looks gray rather than the red it actually is but here's why I took the picture- this is a completely different bloom from the one I've shown you (repeatedly) growing on a completely different banana tree (tree?) and I didn't even notice it until yesterday when Jessie was digging up worms in the bed where it's growing. I only pass by it about twenty-four times a day. As I always wonder- what in hell else am I missing?
But I am glad it's there. And I'm very glad that we're getting a little more rain to help those bananas and the garden and every other growing thing because dang it- we need it. Things are drying up. Even the incredibly hardy firespike is drooping and looking so very tired.

Which is how I felt when I woke up this morning. Drooping and so very tired. And so I haven't done very much today. A ton of laundry because I went for an entire day (or was it two?) without doing any and for whatever reason, baskets full of laundry collected. And I do not mind because doing laundry is the least onerous chore in the world, as far as I'm concerned. It makes me feel like I'm accomplishing something even when all I have to do is walk to the laundry room, take things from one machine and put them into another and push some buttons. I do fold directly from the dryer but folding clothes is something I could do in the dark. I remember a thing a neighbor of my mother's told her once when he looked across his backyard to see her taking in laundry from the clothesline in her backyard which was, "Ruth, I don't know if y'all are the dirtiest people I've ever known or the cleanest."
I think of this frequently as I start yet another load.

I also made soup today. This has been an all day process. I boiled the turkey carcass for many hours and added what leftover broth I had from boiling giblets and some celery and onions and garlic and achiote paste that I buy in Mexico and which I love. I threw in leftovers from yesterday including greens and green bean casserole and...what else? Oh yeah, leftovers from before Thanksgiving including broccoli and cheese sauce and also cut-up baked sweet potatoes, delicata squash, apples, and raisins. Yes. Yes I did. Some old mushrooms that had totally reached their peak got thrown in along with some cut up cherry tomatoes that were dancing on the edge of evil, and some frozen corn. And some brown rice. I have filled up the biggest new faux La Creuset dutch oven with this concoction. And believe it or not, it's pretty darn tasty. 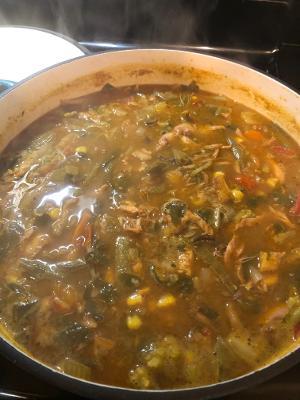 Also, I can send most of it to Tennessee with Mr. Moon along with the chili I'm going to make so they can alternate meals nightly. I imagine that Mr. Moon's friend may question the presence of raisins but I will advise my husband to simply say Gourmet if he brings the issue up. That word covers a lot of ground and can explain mysterious and unusual ingredients found in food. Or so I've found.
Let me add that after months of using these Tramontina enameled cast iron pots that I got at Costco, I am still completely happy with them. I noticed that they are back in stock at our Costco in the Christmas present section and if any one of you is thinking about trying them, I'd say go for it. So far they have been lovely pots.
And do we even need to mention that milage and performance may vary in your house?

So here's another thing I did today- a bit of desultory online shopping for a new stove. I'd been simply googling "30 inch gas stoves" and was getting what I am sure are perfectly practical and fine stove suggestions but today I made the mistake of googling "High-end 30 inch gas stoves."
What a difference a mere modifier can make!
Now we're talkin'.
I have, however, been down this path once before when Mr. Moon and I redid a kitchen and he bought me a Viking stove that was huge and gorgeous and cost as much as a French automobile and which ended up being a pain in my ass in ways that I never could have imagined. We tried to get Viking to come and fix the thing but they said, "So sorry. Your warranty is expired," and I wrote the president of the company a letter that amused him so much that he sent an entire crew out to check on this stove to see if it the electronic igniters indeed caused the telephone to ring when used and if I was actually using an old axe-handle to keep the oven door propped closed.
They were and I was.
They fixed everything. Free of charge. Which makes that letter the most well-paid writing I ever did.
So Big Names do not impress me but quality does. Of course it's impossible to tell what the actual performance of a particular stove will actually be until you buy it, but research does help. I'll probably end up going to the local appliance store where we have established a relationship and I'll ask them to tell me what I want and they will.
Maybe.
All of this for a woman who had her first thrilling epiphany concerning cooking while boiling an iron pot of vegetables over an open fire on a mountain in North Carolina during a Girl Scout primitive camping event and who for quite awhile, cooked in a stove that had no thermostat for the oven. Successfully, I might add.
I just really like to cook.
And to wander along this vein for another second, my husband bought me a new bread knife this week which is such a joy to use that I can't even describe it. I've been using my grandfather's bread knife my entire life and it has become a bit...dull. He was born in 1888 so you can only imagine. I do have a lot of emotional attachment to his knife so perhaps I should give it a proper burial. Or just keep it in the knife holder for fat, juicy tomatoes which it will still cut nicely. It's just not up to the challenge of sourdough bread which needs to be cut without smushing the loaf. And this new knife does it.

And I guess that's about all my news from Lloyd. Well, I did get to do a FaceTime call with one of my oldest dearhearts this morning and although FaceTime is a most unsatisfactory method of communication in some ways and although I always obsess about how I probably look, it was a beautiful conversation with a beautiful friend and I ended up crying a bit and we told each other we love each other and I am just so grateful for friends like that.
Some poison ivy has broken out on my inner arms but it would have been a miracle if that hadn't happened. It's not so bad as these things go. A mere slight annoyance.

Here I go to stir the Gourmet Soup and heat up some of The Very Best Dinner Rolls. There will also be pie. I decided last night after a small amount of random sampling that when it comes to pecan-based pies, the plain old simple pecan pie is superior over the deadly rich chocolate pecan pie. It's like we took perfection and messed with it.
That is just my opinion. Sometimes Gourmet is not what is needed. Amazing but true.