A Generally Cheerful Accounting Of A Day 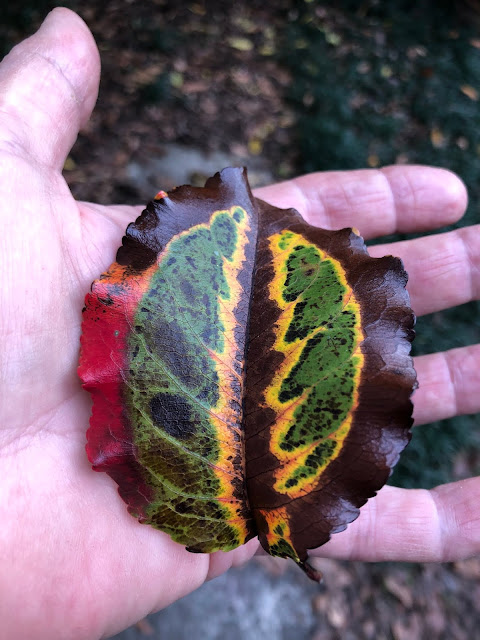 If this Bradford pear leaf was a dance, it would be a Tango. Or perhaps the Electric Slide. Certainly not a minuet, a waltz or a (shudder) box step. It's a Cha-Cha of a leaf, a whirling Sufi dancer in a ballroom full of sedate people wearing somber gowns and too-tight tuxes, a Santeria priestess trance-dancing with a lit cigar clamped between her lips and a bottle of rum in her hand.

It's been a nice day although I've thought it was Sunday all day. I woke up from a strange dream wherein I was in a play and, as usual in these dreams, I had no knowledge of the script and my costume was not the one I was supposed to be wearing and I couldn't make my hair do what it was supposed to be doing BUT none of that mattered! Who cared? The play was being performed in a library, not on a stage, and I just kept laughing at my foibles. Of course, I did lose a child somewhere but that was an entirely different part of the dream. That part was stressful but the play sure wasn't.

I made us a nice breakfast which we finished around noon because we were both being lazy and then did some crosswords and more laundry and eventually, went outside to do a little pulling of plants that have served their yearly purpose and also some weeds. I am listening to the audio version of The Queen's Gambit, the book, and quite enjoying it. So far it would appear that the series is quite faithful to the novel. We shall see if that continues to be the truth.
While I was yardworking, my chickens came to observe what I was doing. 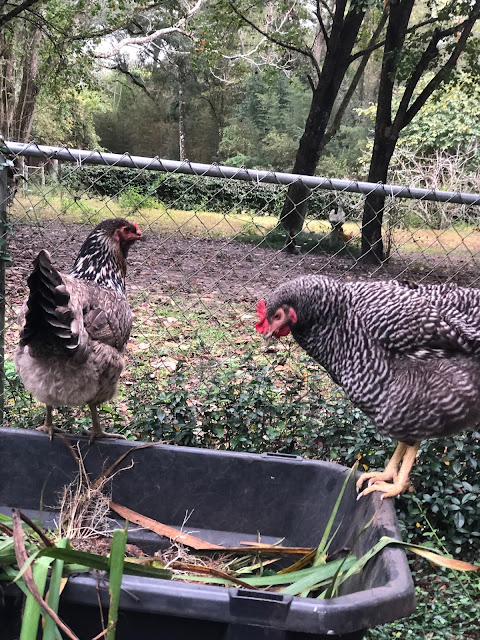 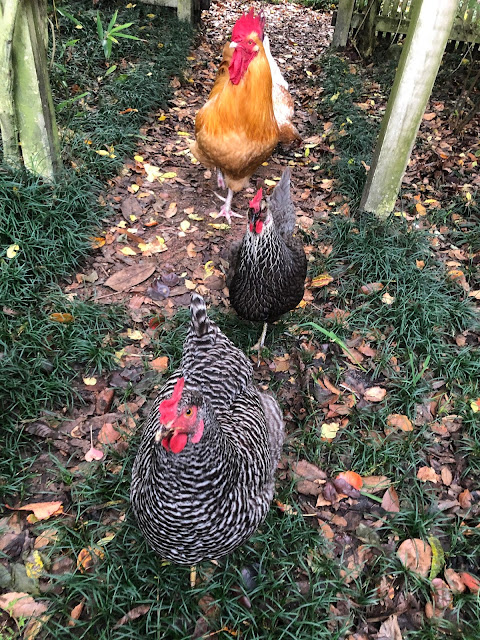 What would I do without my chickens? And look what they gave me today: 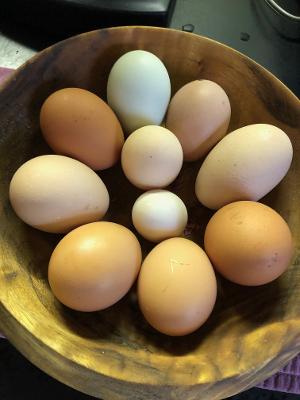 These are semi-arranged in order of size, the largest one being the egg at approximately 2:30 which, although you can't tell, is HUGE, to the smallest which is little Miss Tweety's in the very center. I doubt that three of them would have the volume of the largest one.
Here's a funny story involving eggs- Mr. Moon got a guy to come over to give him an estimate on how much it would cost to get some trees in the yard taken down. Now, as I have said before, my husband has been making deals since he was six years old when he sold a herd of cows. He lives to bargain. Loves it too. So he asked the tree guy what he was thinking for taking down the trees we want taken down.
The tree guy says, "X thousand, five hundred." It is quite expensive to have trees taken down and I'm not saying what the "X" stood for and basically, I don't remember anyway.
BUT. Tree Guy then says, "What were you thinking?"
And Mr. Moon says, "X thousand and a dozen eggs."
Tree Guy says, "Sounds good," and they shook on it.
We are now joking about how our eggs are worth five hundred dollars a dozen. That's approximately $41.67 an egg.
My hens should be proud.
And so it goes. Maurice and Jack had a huge fight in the middle of the night and now Jack can't walk on one of his paws and Maurice has spent the entire day sleeping in the Pack'n'Play. What is WRONG with those cats? Kum Bah Yah, you assholes!
And to end the day on a festive note, I just got a text from Jessie with pictures. They went down to Tate's Hell today to cut a Christmas tree. There's some program where you can pay a fee and go out and cut your own tree just like the pioneers (and my family when I was young) did, and they got stuck but they Macgyvered their way out so all was well. 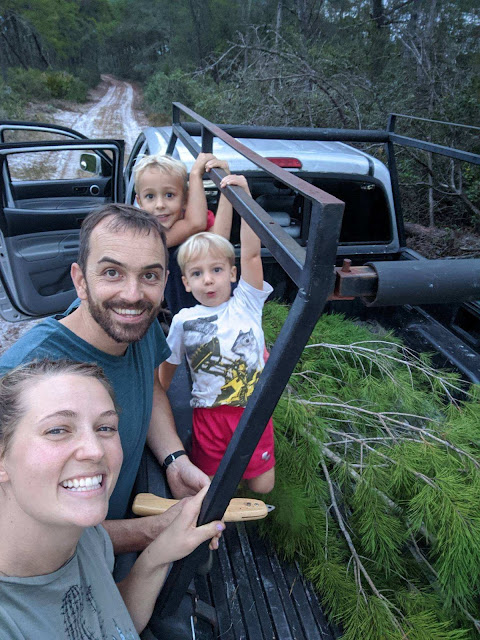 As I always say, Florida isn't all about Disney World and Miami Beach. There's Tate's Hell, too.
Ho-ho-ho.
Love...Ms. Moon
Posted by Ms. Moon at 6:31 PM