A Better Day For Sure 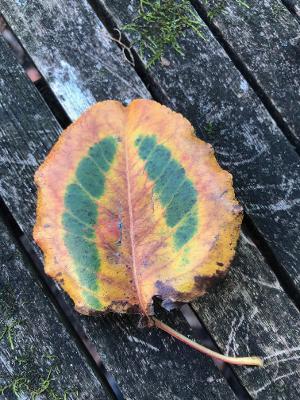 Every fall when the horrible, awful, Bradford pears color up and lose their leaves, some of them look so much like the surrounding/setting in which the Virgin of Guadalupe is always pictured. I probably point this out every year. I used to have such a crush on that goddess, that Queen of Mexico, La Reina de Mexico. 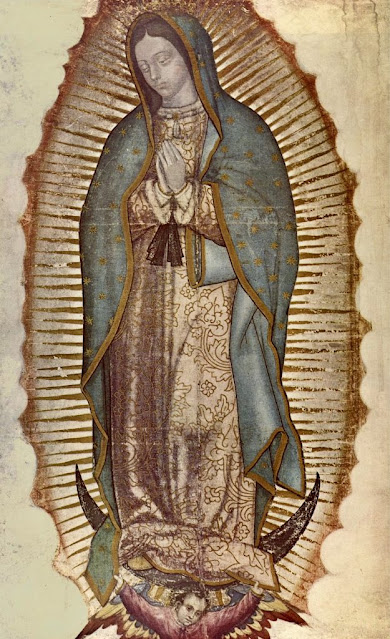 Images of her can be found everywhere in Mexico from churches to markets to bars and restaurants to homes. She is still well-represented in my house although my mad crush has mellowed into more of a longtime, gentle love. 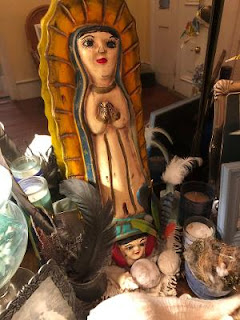 Here's an image I just found online that I adore and wouldn't you know I can't find the artist's name? 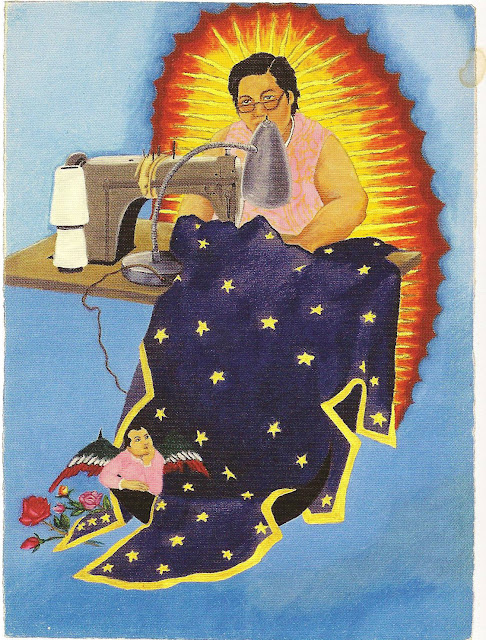 There's a thousand or more words for you.

So today was much better for me. I went to sleep early last night and woke up feeling much improved and very rested. I knew that August and Levon were going to come out to play so that Jessie could go do her shopping and I got my necessary chores done quickly, including changing out the hay in the hen house. Poop begone!
At least for a moment.

The boys burst in the kitchen door and said exactly what I knew they would say which was, "Is Boppy here?" He was not. He'd gone hunting but would return soon. So after Jessie left, we played a bit and read a chapter of "Charlotte's Web" and the boys kept asking me to sew them something. I told them that I needed to oil my machine before I could sew anything, and so we decided to do that together. I can't tell you how much pleasure this gave me. I got out the old Singer and set it on the dining room table and told them that it was made the same year I was born so that we are exactly the same age.
"Does that mean you were born to sew on it?" asked August.
I pondered for a moment and then said, "Yes. Yes it does."

We got out the little pamphlet that came with the machine which has illustrations of where you put your drops of oil and we got to work. 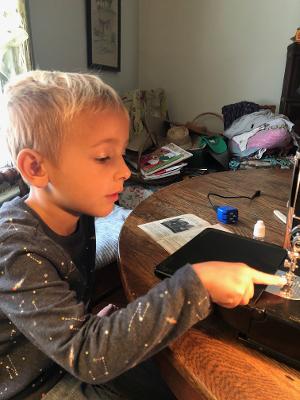 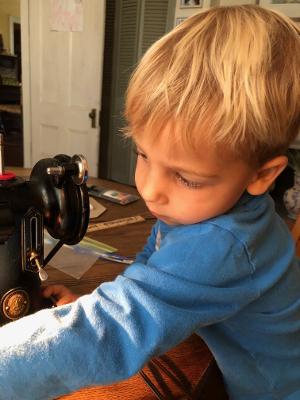 We talked about how the machine runs and what the bobbin is for and I even demonstrated how, when you sew with a needle by hand, you have to go underneath and above, both, to make the stitches hold the fabric together. Levon eventually lost interest but August did not and after we'd oiled AND lubricated the machine I showed him how I run a bobbin and thread the machine and then I showed him how it sewed.
"See?" I said. "It sounds so quiet and it runs so smoothly? That's because we oiled it."
It was so nice to be able to show the boys something that I know how to do, that I sort of understand although, as I told August- it all still seems like magic to me but I know it's not.

Boppy came home and showed the guys pictures of the deer he saw from his stand this morning. Pictures and his empty coffee cup were all that he brought home today. I made them all some lunch and then I let the boys watch a tiny bit of T.V. and then we played cards. But oh! Here's a great picture. 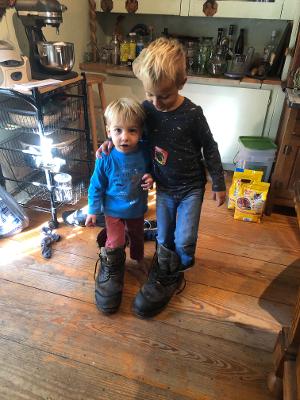 These boys are so sweet. And so sweet to each other. I told August today that I really like the way he listens and behaves so nicely and he said, "So does Levon."
I mean...please!
Of course they are children and sometimes they don't listen and sometimes they are crazy (for about fifteen minutes today August refused to say anything but, "Why?") but overall, they are a joy.

Before Mama got here to pick them up we played some cards on the back porch, Levon on my team and on my lap. I was a bit relieved when Jessie did show up because it appeared to be one of those games of Battle that was never going to end, ever.

Tomorrow I am going to run errands in town and despite my resistance to leaving Lloyd, I know it's good for me to get out of the house and out into the world. Unless I catch covid. Which hopefully, I won't.
I am having a harder and harder time remembering that cases are spiking along with hospitalizations and deaths. I guess since I rarely go anywhere none of it seems real. But I do remember. I am aware. I will wear my mask and use my hand sanitizer and I won't touch my face.
A quarter of a million Americans have now died from the virus. It is no time to grow lax.

Be safe, y'all. Please. Live for the good days because surely there will be some for all of us.