I bet you that a whole lot of Americans, and not to be sexist but mostly women, are sitting back right now thinking about their smaller Thanksgiving celebrations and saying, "Well, that didn't suck so bad." I did very much miss all the rest of my children and grandchildren who couldn't be here today but honestly- small can be sweet and we've been in touch with each other all day, sending pictures back and forth, sending love.

I didn't even get up until nine o'clock although I woke up at six when August jumped in the bed with us but it was okay because he did some serious cuddling and didn't talk much. At seven his grandfather got up with him and I'm pretty sure that Jessie and Vergil and Levon had already been up for quite awhile. When I finally made it to the kitchen, Jessie had already made her spinach and artichoke casserole and the boys were rocking and rolling. I got started on the stuffing which August helped me with. 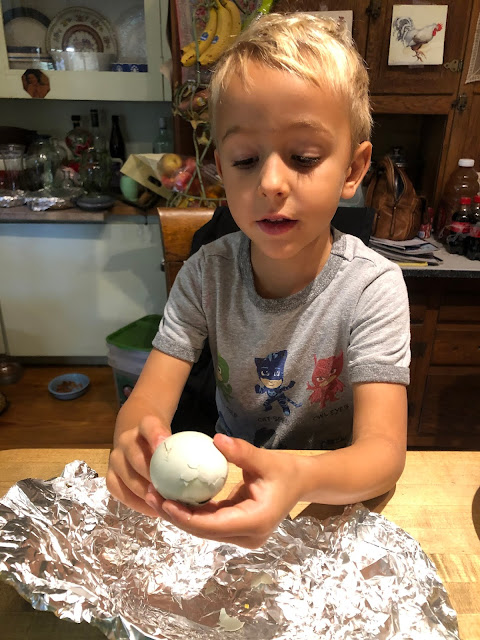 He peeled a hardboiled egg and cut it up and he smushed up the cornbread. 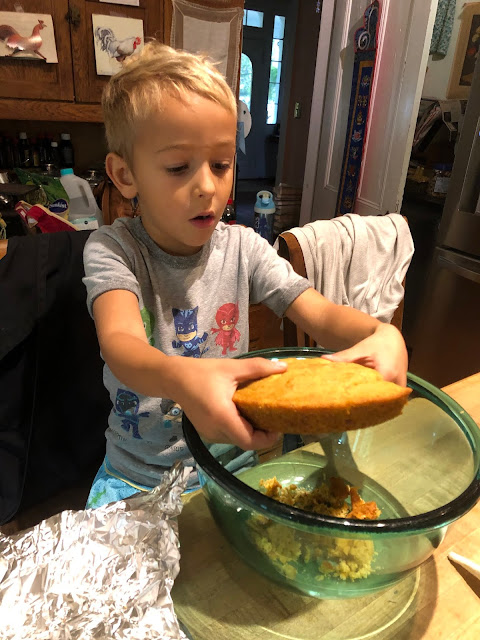 He's a handy little lad in the kitchen with decent knife skills.
Later on in the morning, Vergil and Boppy took the boys out to the woods to walk around and do some fishing with worms they'd collected in my little garden bed beside the kitchen which turns out to be thick with the wriggly critters. While they were gone, Jessie and I rambled around the kitchen and cut things up and stirred things and talked about things and laughed a lot and did a shot of rum, and I stuffed the little turkey and put it in the oven and for some damn reason that eight-pound turkey cooked twice as long as some fifteen pound turkeys I've cooked and still didn't get done all the way. And I know the oven was working because other things in there sure did get baked. I have no idea what that was about. It held the stuffing nicely though and the white meat was edible. I'll cook the rest of it for soup. We had greens from both Jessie's garden and ours and they were pure good. I did not like the green bean casserole, made with some of my own beans that had been frozen. I'm pretty sure I won't be doing the raw freeze again. They're okay for soups and stews but not so much for other recipes. We had the spinach and artichoke casserole which is a sin and delicious. Stuffing and gravy were fine. The cranberry relish was delicious. And the rolls were superb. 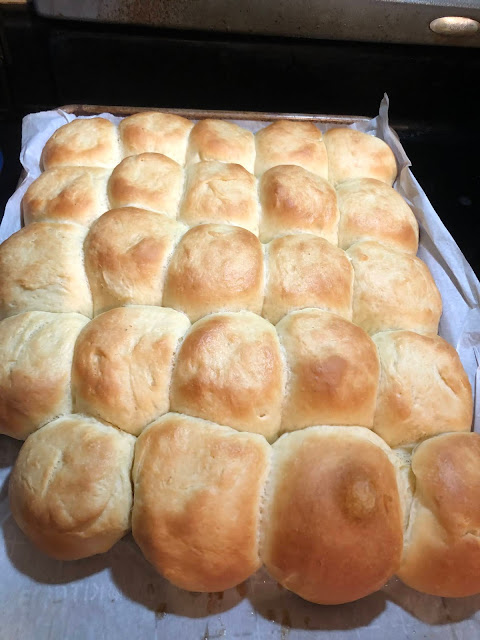 I tried a recipe I found online and it was called something like The Very Best Dinner Rolls and Jessie and I kept joking about that- why would you use any other recipe? When we ate them I said, "You know, Jessie, they might just BE the very best dinner rolls." After going through the pickles and olives and cheese and crackers, August and Levon basically both ate a roll apiece and saved the rest of their tummies for pie. 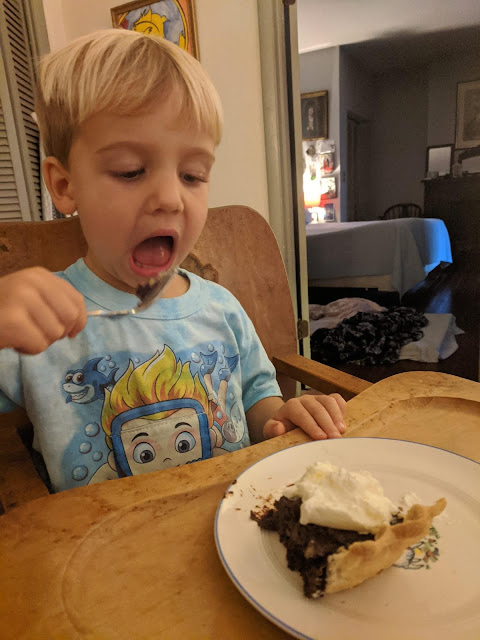 I have to tell you that this boy is absolutely hysterical. He looked at his brother eating his pie with his fingers and said, "Hey guy! Use your fork!" If anyone knows the value of the correct tool for the job, it is Levon.
So it was a very nice day and there was a little hallway dancing by these two sweethearts. 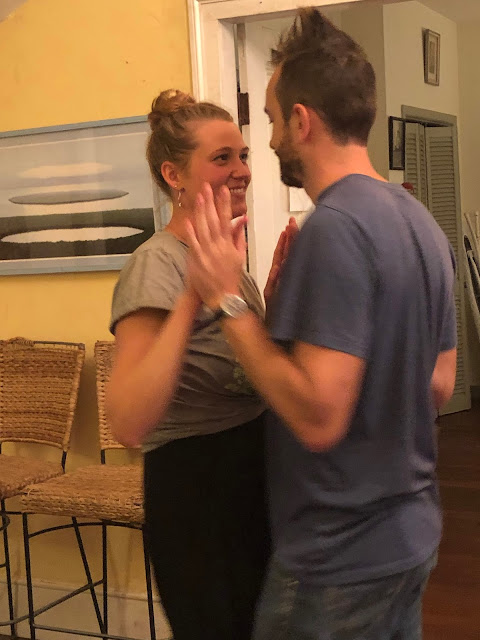 It was Vergil's turn for the wild hair. I think his wife likes it.
And while we were eating I made Vergil tell us about meeting Jessie and how that went and that segued into how I met Mr. Moon and so forth.
Love stories are the best stories, aren't they?
Things got a bit rough when it was time for the Weatherfords to leave. The TV had to be turned off and August, who was suffering from TV addiction cold turkey withdrawal, exhaustion, and possibly sugar overload, wailed and wailed and wailed. He wanted to finish watching The Grinch and he would not stop crying. It was the most crying I've ever heard from him. Levon cried a little bit in solidarity and then he got over it but no matter what anyone said or did, August could not get over the sadness of no Grinch. No one fussed at him about it or told him he was being silly. We all know that sometimes crying is what you need to do. His daddy held him and said, "I know, I know."
At the end, August and I were the last ones in the Glen Den, everyone else packing up and tidying up and I said, "August, do you want me to hold you?"
"NO!" he wailed.
"Do you want me to kiss you?"
"NO!" he cried.
"Do you want me to leave you alone?"
"NO!" he sobbed.
And he was crying when they left.
But they left with so many leftovers and and our love and the memory of the fun we'd had. Last night after the kids went to sleep, I made Jessie and Vergil and Mr. Moon watch this...advertisement? that I'd seen on FB that day.
We laughed and laughed and laughed. As crazy as this world is, as much as I despair that things are just so fucked and that we are living in the end times, I do have to stop and realize that weed is legal in many states, Tommy Chong is now able to get stoned without fear of prison and is married to a beautiful, hot wife, there is marriage equality, Joe Biden will soon be our president, and Keith Richards is still alive.
And so is Tommy Chong.
I hear owls hooting in the distance. We got the tiniest bit of rain today and it may rain again in the next few days. There are three types of pie in the refrigerator- chocolate pecan, regular pecan, and Jessie's key lime and my bed is waiting and my copy of Barack Obama's book is lying beside it. My children and grandchildren are all safe and well in their own cozy homes with enough to eat and we all love each other. The man whom I met and knew within a week was going to ask me to marry him is here and he still loves me and I sure do love him. 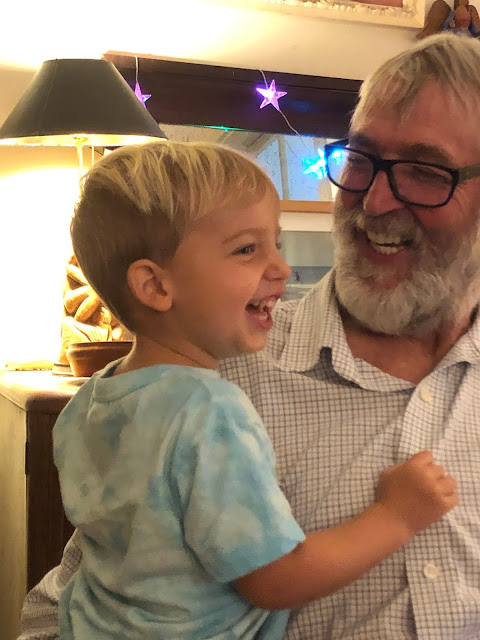