Normal Is So Fine 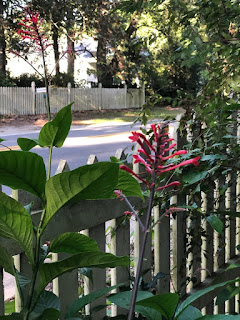 It's been a nice day in Lloyd. Just as hot but still a bit drier and it was overcast this morning so I put on my overalls and went out and pulled weeds. As we all know, weed-pulling is nothing but a joy to me except for the heat, sweat, and ants. It was hot and I did sweat and got one pretty severe ant-attack but I persevered. The weeds I have growing now are so satisfying to pull. They come up fairly easily and make a ripping sound when I free the roots from their earth home. I knock all the dirt off of them and toss them in the garden cart and go on to the next one. It's also satisfying to look at what I've done, too, to see cleared dirt where I will soon be planting my fall garden. I do so love to make things grow.
The picture above is of a blooming Firespike. From one patch in the back yard that was here when I got here I have rooted enough to plant all along the front fence. I like to think that it is saying, "Hello hummingbirds and butterflies! You are welcome here!" 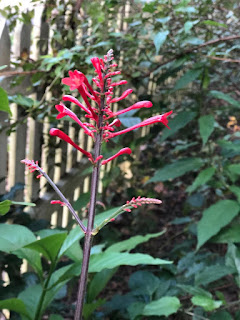 It's such a hardy plant and so easy to root. I had no idea how easy until one fall I cut some and put it in a vase and forgot about it until a month or so later when I noticed that it was still green and vigorous and had roots galore. I stuck them in the ground when spring rolled around and that was that. Now I root some every winter and the more I have, the more I can root. And bonus- it's a pretty green plant in my house all winter long that can thrive with barely any light at all.

I also filled up my hummingbird feeder today and hung it on the kitchen porch. I hope I get some visitors. 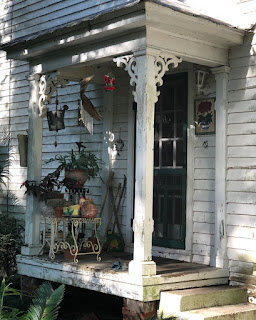 Here's my little kitchen porch. I do not realize until I take a picture of it how sadly in need it is of pressure washing, repair, and painting.
Sigh.
Well, so do I which is why I do not look in the mirror any more than is absolutely and strictly necessary.

I cut out Maggie's butterfly dress today and began sewing. I have only screwed up one thing so far. Hurray for me! And not too badly. Easily taken care of with a seam ripper and a little patience.
I have enough fabric left over to perhaps make August a pair of pants. He asked me yesterday to sew something for him and maybe that will do. He'd probably rather have a dress. Yesterday when we were watching "Mighty Little Bheem" there was a scene where Bheem, who is a super-strong little Indian toddler was given a choice as to what new garment he wanted and he picked out a dress. I loved the fact that his mother just shrugged and bought it and put it on him. This led to a mix-up between Bheem and a little Indian princess but it all got straightened out in the end.

I also have pinto beans simmering on the stove. They are my favorite. They are not Mr. Moon's favorite but once in a while he has to take one for the team.
The team being me, of course.
He is very gracious about this and is yet another reason I love him so.
He spent the Labor Day holiday driving up to Georgia to collect the hunting stuff he'd left at his former hunting camp. Deer stands? Other stuff? Etc.?
I don't know. But he used the tractor! And he is now home and safe.
He's going to be hunting just down the road this year although I believe that two out-of-state trips are planned including one in Canada. I should pay more attention to these things.

How normal and lovely this day has been for me! Last week at this time we had no idea if we'd be hunkering down for a hurricane or not. Dorian was still a tropical storm and the forecast was all over the place with a crossing of Florida a sound bet. But the Bahamas are still being pummeled by this monster storm and it is not moving. It is sticking to where it is, right over them, and I feel so guilty celebrating the fact that it doesn't appear to be headed our way while people are in sheer hell.
And so I am not going to celebrate but I am going to be so aware and grateful for a day in which I could decide to hang a hummingbird feeder without worrying that it could become a deadly flying missile. Not right now, anyway.

I will gladly take each day of normal we get.
Or at least as normal as a day CAN be in these times.

While I was out taking pictures I took a picture of the grave of Elvis. 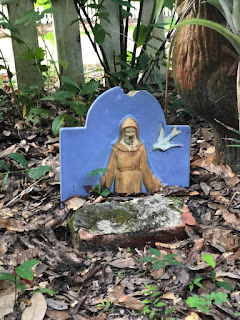 Yes, it looks like St. Francis has a horrible nosebleed. I found that little tile plaque in another part of the yard here. I buried Elvis right in the front yard- point of honor- because he was so good at watching over his flock and I wanted to feel as if he was watching over us. For those of you who have not been here forever, Elvis was my first true rooster and he was one of the finest, most handsome, protective roosters ever to walk the earth. 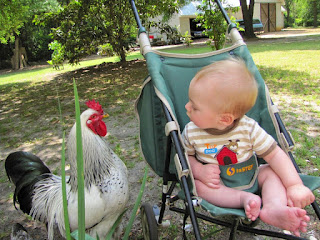 Believe it or not, that was Owen when he was a baby boy. He and Elvis were good buddies.
I still miss that bird. He was a glory. I miss that baby, too, but I sure do love the guy he's grown to be.

And that's it for today.