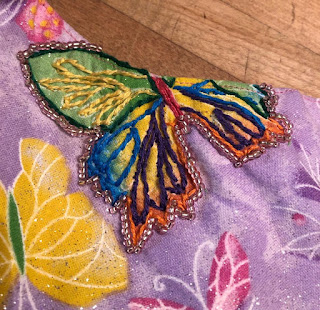 My Lord but I have been a good wifey today.
It started last night when my husband kept scratching his legs in the bed.
"What are you scratching?!" I finally asked. There may have been an edge to my voice.
"Fleas!" he said. We battle fleas constantly. We've bought the cats the most expensive, toxic flea collars on the market. They may help but they sure don't solve the problem. Lloyd fleas are probably far more vigorous than your run-of-the-mill fleas.
But back to being a good wife.
Did I get up and get him some Benadryl cream? Did I make soothing noises or say words of sympathy?
No. I did not. I probably snorted.
The fleas don't like me so I can ignore them. The blood under my tough old hide is not on their menu whereas Mr. Moon's blood vessels are so close to the surface that he is the gourmet buffet of their dreams. So I am really not as sympathetic as I should be. This is a fault of mine and I know it. I just laid there and hoped that maybe he'd go sleep in his chair.
Which he did.
And I finally got some sleep.
Please note that I don't think that we have fleas in our bed and that these pests attack him when he gets up to use the bathroom although it is possible because Jack does like to sleep with us at night and spends his days mostly napping on the bed although I do heft him up with great effort to place him on the floor so I can make the bed in the mornings.
But I washed the sheets this morning and hung them on the line and washed two other loads of clothes and hung them on the line and I took a damn walk which has nothing to do with being a good wife or anything at all as far as I can see.
While I was doing this Mr. Moon was working on his tractor. He had planned to go up to Tennessee this weekend to get some pre-hunting work done there with a friend. For those of you who do not know, hunting involves 90% land preparation and 9.99% sitting in the woods and 0.01% shooting something.
I'm serious.
Anyway his friend hadn't gotten things ready to get things ready if you catch my drift and so he'll be here this weekend and he needs to get the land where he's going to hunt locally in some semblance of readiness which involves the tractor.
Don't ask me. Just don't.
But I do know that at one point today he told me, "This makes me so happy!"
He was drenched in sweat and smelled of gasoline and did indeed appear to be in a state of transcendent pleasure.
He finally got the tractor running to his satisfaction and has trailered it to where he's going to be using it and for all I know, has begun doing whatever it is he's going to do with it.
In his defense, he did ask me yesterday if there was something I'd like to do this weekend with him. He hasn't forgotten me entirely. I told him that I miss the beach terribly but that it's just too hot.
Too hot for the beach?
Oh yeah. It happens.
So in the spirit of being a good wife, I am encouraging him in his tractoring and whatever it is he's doing. I have a feeling that he's going to be so tired tonight that fifty fleas could bite him and he wouldn't even know it.

So I went to Costco and bought stuff and came home and unloaded it and got the sheets in off the line and made up the bed and baked cookies and then I did some ironing and it's about time to make supper. The main thing I had to buy at Costco was chicken roll-ups because tomorrow is Grandparent's Day at Owen and Gibson's school and we are invited to have lunch with our grandkids and it has become a tradition that I bring the roll-ups. Their other grandma will be there and I don't know what she's bringing but I'm also bringing the cookies I made which Owen may not like because they have not only chocolate chips in them but also raisins and pecans. And oatmeal. They are sort of the perfect cookies but that boy can be picky.
After lunch, I'm going to check my Gibson out of school early and do something fun with him. That poor kid- he's such a middle child. Not only does he have an older brother but also a younger sister who is, quite possibly, the cutest girl in the world. Also the bossiest.
So old Mer is going to do something special with the boy and I don't know what that will be yet but I did get him a nice sketchbook and some pens at JoAnn Fabric the other day (they may not have patterns but they sure do have crafts!) as a little gift. I think that just getting out of school early will delight him. At least I hope so.
I love my Gibson.

So that's the news from Lloyd today. Still no rain but it looks like we may get some by Saturday. It continues to be as hot as August was and that's frying-hot. I've already had one shower today and will take another before I go to bed. It's not really that pleasurable to take showers these days when you've been working outside because you don't quit sweating while you're in the shower and then when you get out you're still sweating and it's impossible to dry off which makes it hard to put your clothes on.
Bitch, bitch, bitch.
Or, just reporting.
Jessie sent a picture of a naked-except-for-gardening-boots Levon. She said they spent a couple of hours outside naked (well, not her) and I'm sure the boys loved that.
Lily sent a picture of Magnolia taken from the video screen wearing butterfly wings at dance class. 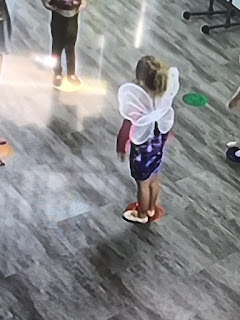 She said that the girl had a blast at class today and it's as if that in her first class she was playing a role because she's been so happy in it since then. I will deliver her new dress tomorrow which, as you can see in the photo at the top of the post, I have embroidered and beaded quite enough although I may had a few more of the sparkly beads tonight while we're watching "Outlander" which we've taken up. It's okay. I keep thinking of all of the hours and hours and hours I spent listening to those books via the audio version and all of the miles I walked while listening. So far I think that the series is fairly faithful to the books and I am not displeased with the casting.

I hope my husband is okay out there in the woods and fields. I bought him a ten-thousand pound flat of Gatorade at Costco today (I told you I'm a good wife) but who knows if he took any with him?