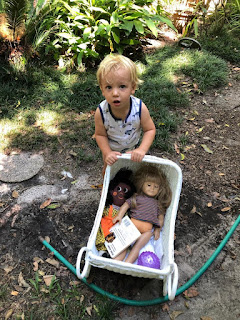 Here is Levon working very hard to push the carriage in which he has babies, a ball, and the tractor book. He pushed these around, inside and out, half the day. He also found a piece of fabric I'd been using for a project and started covering up the babies with it like a blanket. He had a good, full day as did August. As did the grown-ups- Jessie, Mr. Moon, and I. 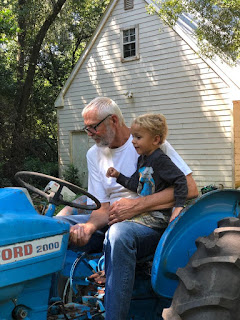 There was more tractor stuff and there was a bit of TV because, well, no one can tell that boy he can't sit in Boppy's chair with him to watch TV. It's just too dear for his grandfather to cuddle that boy. Levon is falling hard in love with Boppy too. He was carrying his tractor book around and I said, "Levon, would you like me to read you the tractor book?"
He looked at me and said, "Boppy read."
"Oh?" I said. "You want Boppy to read you the book?"
He nodded and trotted off to the Glen Den to join August and Boppy in the chair.
He did let me read it later as well as his other favorite which is the The Happy Man and His Dump Truck.
I love this book. Who wouldn't? 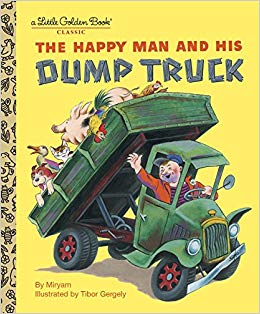 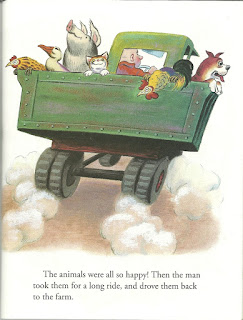 On this page I always say, "I'm not sure the hen and the rooster look so happy."
I suppose it's just very difficult to draw a happy-looking chicken.

August mostly wanted to do Boppy stuff. Of course. But he did like the idea of us making a pillow for his favorite stuffed animal who is named Slothy because he's a sloth. So we did. I stitched and he stuffed it and then he wanted me to make Slothy a blanket and so we did that. He came up with the idea of making it like a sleeping bag so that Slothy can sleep inside of it and that's what we did. He also wanted blanket binding on it and two lady-bug buttons. Which of course he got. He was very precise about how big he wanted these items to be, showing me with his hands. I'm not sure I've ever seen hands as beautiful as August's. They are expressive and his fingers are long and perfectly formed. And I just now got a text from Jessie with a picture of Slothy who had just woken up from a very nice nap with August. 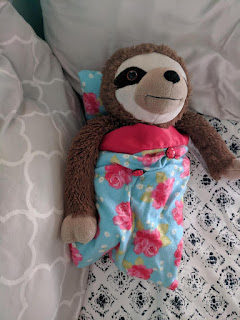 Quite cozy, I would say.

And now our Owen's here! He is spending the night so that he and Boppy can get up early in the morning and go fishing out on the Gulf. Every time I see him he appears to have grown a bit taller. How precious he is to me- the child who made me a grandmother. They are all precious to me, each and every one so very different.

I better get busy with supper. I've been cooking that wild pig ham all day long, slowly, slowly, wrapped in banana leaves and simmering in the juices and spices I marinated it with. I hope it's as good as the last one I cooked. True tacos tonight!
And speaking of bananas- my one stalk of the fruit has pulled the plant over and broken it. I need to do some research and see if they will still ripen. Jessie reports that they have three stalks growing and have propped up their plants. They get a lot more sun than we do. But boy, would I love to taste some bananas that grew in my own yard.
I might as well start planting mangos and avocados and all sorts of tropical trees. With this rapid climate change happening I should take advantage of what I can until it all turns to a desert.
And planting trees is never a bad idea anyway.