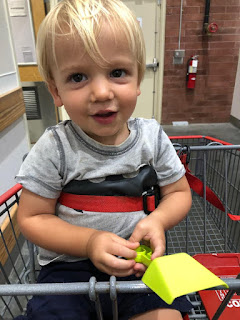 Look at that darling boy with his shovel. I can't tell you how much he makes my heart sing. He's so funny and loves to pretend and he is his very own self although he does repeat almost everything that his big brother says. And if August laughs at something, Levon does too even if he has no idea what he's laughing at. Which makes us all laugh even harder. But that is big-brother worship and that's how it goes (unless they're wrestling) and he is Levon to the core.

I had such a domestic goddess day today. It started early.
You know D? The guy I whom I moved to Tallahassee because of? Well, he and I have remained friends for all these many years. His wife was at May's birth and I was at their first child's birth. D and my ex-husband were childhood friends and now D has become quite good friends with Mr. Moon and he came over this morning for breakfast and to talk with Glen about a business interest they have come up with. While D is a musician and Mr. Moon is a car salesman, they do actually have a lot in common. They have both started numerous businesses and both have always had their families as their main priority. They're both sweet men. Neither one is afraid of work.
And so forth.
It was wonderful to see him today. He and his wife live in Nashville but his daddy lives nearby to us and so he's around now and then and I always love it when they visit but I hadn't gotten to really spend time with him in quite awhile so I thoroughly enjoyed this breakfast meeting. I made a full-on southern breakfast with biscuits and wild pig sausage and yard eggs and stone ground grits and I even opened a jar of the pear preserves.
They were good.
And appreciated.
While the men discussed the business possibilities I did laundry and cleaned up the kitchen and went across the street to let my neighbors' puppy out for a pee as they both had to be in town. I hung sheets on the line and later on I went to the post office where a box was waiting for me. I had ordered a set of honest-to-god grown-up sheets and they had arrived. I can't tell you how excited I am about these sheets. I washed them and hung them on the line too.
I met Jessie and the boys at Costco in the early afternoon and I doubt I could have had more fun at a festival. August had just gotten out of his second day of preschool and he was in a good mood and even asked me if when we went into the coldy room I would warm him up which was a rare invitation to hug the boy. Both boys and I laughed a lot and they ate many samples. Who in the world would have envisioned a day wherein going to a huge box store with grandchildren would be one of my greatest pleasures?
Not me, baby.
Yet, here I am.
We did our shopping and then said good-bye and I had to run by Publix for a few things and then I came home and unloaded all the groceries and put them away and took the sheets off the line and made up the bed with the new ones and folded the old ones and tucked them into a drawer. And then I decided to mop the kitchen and the bathroom that adjoins the kitchen and so I did which involves moving furniture and recycle containers and the trash can and all kinds of stuff and then I swept twice and then mopped twice and now I have put everything back and the house smells of Fabuloso and white vinegar and I am exhausted but happy and have a martini and new sheets to look forward to.
So yes, domestic goddessing and it's been one of those days when my energy has abounded and nothing hurts too bad and it's supposed to get down to 67 degrees tonight although it's supposed to be 98 tomorrow.
Sigh.
It sure will feel good in the morning, though. For a little while.

I am feeling extremely lucky tonight. I never for one second forget that I am lucky but when I truly feel it to my bones, it's a sort of heaven on earth.