Dreams, Heat, And Other Things Which Are Difficult To Deal With 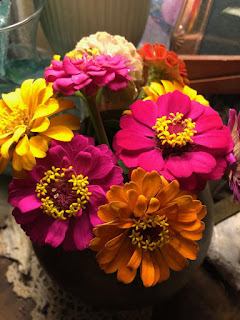 So this morning I was making Ronnie Wood mint tea as one does. All of the Rolling Stones were at my house or somewhere near my house and although I was making that tea for Ron (it required fourteen tea bags AND honey) and was there to see Charlie Watts get his new, stripped-down drum kit I never did see Keith or Mick because I was too busy making that damn tea.
Well, it was good to see Ron and Charlie.
The Rolling Stones seem to have become part of my nightly dream roster and unfortunately the way they've fit in is that I'm constantly trying to clean something or make impossible tea or do some other domestic chores that I am simply incapable of doing just like my other dreams where the laundry cannot possibly ever be done because there are like fourteen bedrooms, some of which I've not even yet discovered and all of the sheets and bedding must washed or else the collected filth and detritus and hoarded-like objects which fill the rooms must be cleaned out which is also a Sisyphean task or I can't reach someone I am desperate to get in touch with because my phone is lost/uncharged/falling into pieces/beyond my ability to operate. Then there are the being-lost-in-a-strange-city dreams or the I'm-working-as-a-server-or-a-shop-tender and have no idea how to run the cash register or perform the most mundane and necessary things in order to do the job. This morning after the tea-making debacle I was looking for a place to buy (haha!) on the beach near Vero and found myself in Ft. Pierce and one had to walk through the houses because they were so chock-a-block along the beach and one old man, instead of being angry that I was in his house, tried to give me a bunch of useless kitchen-wares to carry with me on my house-hunting journey.
Also? The ocean below the houses was deep and treacherous with rocks instead of sand.
And the houses cost too much.

Needless to say that when I wake up I am exhausted, confused, out of sorts, out of body, and ill prepared to start a new day. And that's the non-scary version of how I feel.

I did take a walk this morning. It was quite cool when I got up but by the time I'd come back to myself and dealt with the chickens, and read everything on the internet, and eaten, and read the paper, and done a load of laundry, it was, needless to say, getting a bit warm. Not as warm as it eventually got today which was 99 degrees but warm enough. I did hang all of my laundry on the line though and also watered the garden which felt wasteful because the only things in it that are still growing are the zinnias, a little bit of arugula, a few peas which have survived the heat and the drought and my volunteer sweet potatoes. I can't stand to see those zinnias all shrivel up and die though. Picking a few of them and putting them into vases has made me incredibly happy this summer. Their colors are as true and deep as gowns made of silk velvet and worn by queens. 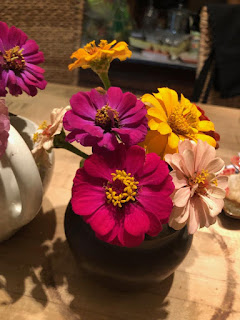 The weather forecast says that we may actually get a bit of rain tomorrow but I'm not betting the ranch on that. The temperature is also supposed to become more normal for this time of year and it may not even reach 90 on Thursday although it may get up into the high 90's again tomorrow. The chickens are surviving but not doing much laying and they are molting. They seem to be okay, making their dirt baths in the direct sunlight sometimes and I don't know how they tolerate that but I guess that the hot sand feels good against their skin. Or something. Perhaps the heat has fried their little chicken brains and they are completely witless.

Here is what the blossom of my bananas looks like. 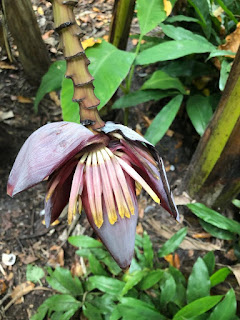 Isn't that freaking bewitching?
Here are the fruits themselves. 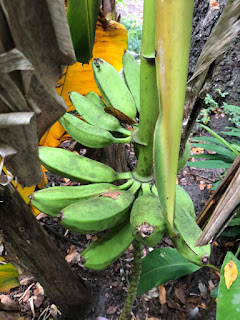 There is something just so lush and...naughty about tropical plants and their fruits. They shove their swellings and organs right in your face like a female baboon's beautiful red bottom when she becomes sexually receptive.
Do you know what I mean?
Perhaps my little brain is fried too from this heat, this endless summer that drives me inside to sit in front of the TV and embroider useless decorations on things. My project right now is a pair of corduroy overalls for August. He checked out what I was doing the other day and gave me rather specific instructions about how it should be done. Colors everywhere and also, when he discovered the beads that I'd been using for Maggie's dress he wanted those everywhere too. And oh- buttons.
I told him I would do my best.

What I was watching today was Part 1 of the Michael Jackson doc, Leaving Neverland.
You know, it's so weird. I know a woman who is truly devoted to defending Jackson against the accusations made in this film and I can't figure out why. She's not stupid. But how can anyone believe that a man who looked and acted like Michael Jackson did was not a pedophile? But that's not my real question. My real question is- how could these parents allow their little boys to spend the night with a grown man in his bed while they themselves slept in distant rooms or even in distant houses? I can tell that Jackson courted and groomed the mothers as much or more than he did the children but my GOD! Of course, at that time, Michael Jackson was the biggest star in the universe and to have someone of that elevated a status wanting to spend time with your family, your child, was like being touched by Jesus. Or chosen by a king.
And quite honestly, even if he never touched any of those boys it was still completely wrong and immoral and horrible for any parent to have allowed their child to sleep with him.
And I am convinced that he did touch them and molested them too. The worst sin, as I see it, is that he encouraged these little boys to fall in love with him which allowed him to do what he did and then he replaced them in his bed and in his life leaving them doubly scarred forever.
Those boys were as much pets to him as was Bubbles the chimp who, after having grown too old, too big, and too aggressive to be fun to play with, was taken to a wildlife refuge.

So much for that.

Tomorrow I go and get my massage and I am looking forward to it.