In Which I Face A Fear And Get A Gift Card 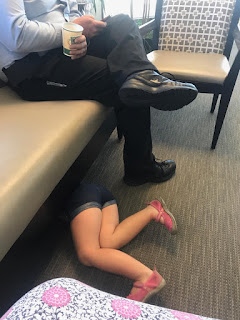 My favorite picture of the day. Lily and Jason and Maggie were at a lawyer's office (don't worry- it's all good stuff) and that's what our darling girl was up to. Or, down to. Or, under to.
I love those little legs. Those strong and sturdy little legs and I love the strong and sturdy girl they support so well.

Rachel called out a lunch for today and Jessie and the boys and Lily and Maggie and Hank and Rachel got to go. Me too. I hadn't left Lloyd since Friday so it was a good thing. I took a walk this morning and got a few chores done, took a shower, dressed and went to town. We met up at Jason's Deli where we all ate salad bar except for the kidlings. August and Levon ate pasta, supposedly. Mostly I think they ate crackers. And ice cream. Maggie loves the cream of broccoli soup there so she got a cup of that. And ate crackers. And ice cream.
As usual we ate leisurely and then we moved outside and talked for awhile. Here's Hank holding some babies. 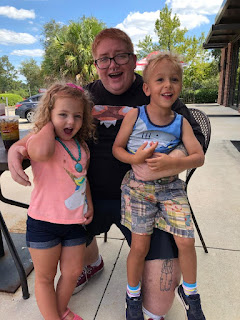 August is fascinated by Uncle Hank these days. He always wants to see his tattoos. He also likes to go through my purse but that's mostly just because he's looking for mints and gum which grandmothers are required by law to keep in their pocketbooks. (Remember when they were pocketbooks?) We're also supposed to carry Kleenex in those little packages but I don't have any. Occasionally I'll grab a wad of unused napkins off a table and tuck those into my purse but I haven't yet reached the Kleenex stage.

Anyway, Jessie and Lily needed to make a few plans for the Big Birthday Bonanza happening next Sunday so the rest of us went out to Hank's car and searched it for things the kids would like. It ended up well, despite the fact that the Hoarder's Delight box still hadn't been put back in. Levon got a little purple bear that squeaks when you mash it as well as a ping pong ball which especially thrilled him. Maggie chose a pad of paper that says, "Somebunny loves you" on each page with a picture of a rabbit. I gave her a little pack of crayons that we'd gotten in the restaurant that the kids hadn't used but that I'd put in my pocket and she was thrilled. August got one of those things you can hang around your neck to put an ID badge in. Hank put a quarter in it for him. This was indeed a major prize. So all the kids were thrilled but the mamas still weren't done so Hank gave August a plastic bag and instructed him to pick up trash on a little grassy area which August diligently did. He was into it. Hank comes up with the best things for kids to do. I think part of that is because he retains his sense of what childhood was like and besides that, he always came up with the best things for kids to do when he was a child.
All of the kids wanted to hang out with Hank because he was the most fun.
Guess what? All of the kids still want to hang out with Hank because he's still the most fun. Which explains a lot about why his trivia is so popular. He uses that imagination and intelligence he was born with along with his sense of fun and joy to make his living and I can't think of anything much cooler than that.

And all of that was the main part of my day and then I ran errands, remembering when I was on the east side of town that I had something I had to pick up on the west side of town so had to backtrack and after all of that I went to Publix where...I got a flu shot.

Getting flu shots as a child may have been what started my horrible fear of all things medical and they had to get three people to hold me down to give me one when I was a little girl. I have no idea why I was so very, very frightened but I was. So I have never gotten a flu shot as an adult, even though shots don't bother me at all any more. But last winter when everyone in the family got the flu except for the smart ones who got a flu shot, I decided that this year I was getting one.
Fuck it. I'm not going through that shit again.
And besides that- you can get one for free at Publix. And not only free but they GIVE you a $10.00 gift card! So not getting one is pretty stupid and today was going to be the day and I did it. I filled out all of the paperwork and had to wait for the pharmacist to give it to me and honestly- I barely felt it. It was a total non-event.
Then they gave me my gift card and I did my shopping and of course I forgot to use my gift card but I've tucked it in my wallet by my debit card and I'll use it next time. It's not like I won't be going back to Publix.
If this was a story my fear of medical stuff would now all be magically cured but this is not a story, it's real life and getting that shot didn't do a thing as far as I can tell to make me feel any better about going to a doctor. Just the thought still gives me shivers.
But maybe I won't get the flu.
We shall see, won't we?