Not A Bad Sunday 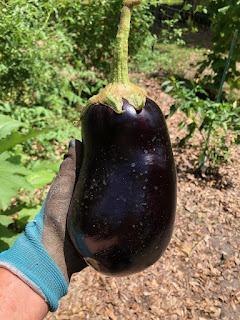 Now that's an eggplant. I may have let it go a day or two further on the vine than I should have but it's glorious, isn't it? Not sure what I'm going to do with it yet. Eggplant Parmesan, most likely. I certainly have plenty of cherry tomatoes I can incorporate into the dish. We definitely planted way too many of those this year. Not sure what we were thinking.

I spent a lot of time in the garden today, weeding mostly. One minute I look at the garden and think, "Oh Jeez. Why did I even bother?" and the next minute I'm thinking, "This is so pretty."
The corn is swelling in its shucks and I'm about to get more field peas and the tomatoes are still coming along and the rattlesnake beans are starting to make pods and I'm still getting a few cucumbers although I am vastly disappointed in those. I really, really wanted to have a pickling summer and it just doesn't look like that's going to happen.
But honestly, I enjoyed myself, kneeling in the dirt and sweating so much that I'm surprised I have a drop of moisture left in my body, listening to an audiobook. The book I was listening to, I Am, I Am, I Am, by Maggie O'Ferrell was fascinating and the writing was beautiful. Phrase after phrase caused me to pause in my head and turn over the words I'd just heard like you would an unusual or especially striking rock picked up on a path or in a river. 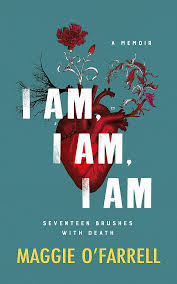 Really gorgeous. I do recommend it.
But back to the garden- I worked until I just couldn't do it anymore. You might say I came to a stopping place when I suddenly started getting ant bit AND stung by some noxious weed I must have been pulling. I was melting anyway and needed to come inside where I drank about a gallon of water and took a shower. I was so dirty that it may take another shower or two to truly be clean but at least the topsoil has been removed from my body.

Another thing I did today was to finally pull the trigger on a place to stay in North Carolina. Phew! That's always so stressful. I've had almost nothing but very positive experiences with Airbnb but there's still always the worry that you'll make that commitment, pay that money, and then find yourself in a most unsuitable situation and IT'LL BE ALL YOUR FAULT! Or mine, as it were, in this case. I showed it to Mr. Moon before I hit "reserve" though and he agreed that it looks fine. No TV but there's a king-sized bed and it's a pretty little cabin and they warn about possible dangerous animals like bears and coyotes so you know we'll be happy. And feel right at home. I can't wait to see the Weatherfords again. I'm already at the point where I'm texting Jessie things like, "Is Levon still carrying his shovels around?"
I mean- I need to KNOW!
And every time I walk past the pile of August's favorite books on the dresser in my room I get sad. I want to read my little boys some books! Magnolia and Gibson will be spending the night here on Tuesday but they don't like listening to books as much as August and Levon. I imagine that I'll be able to read The Little Red Hen Makes A Pizza to them. At least. It's a rare occurrence that any of my grands turn down that book.

So guess what I'm going to do tomorrow? I am going to call Century Link once again and if they don't have any answers, I'm going to ask to speak to whoever is in charge. Yeah. Like of the whole company.
Well, of course that's not going to happen but I'm going to get some answers or know the reason why.
That makes no sense, does it?
We were talking to a friend who lives nearby who is a Luddite and has no cell phone, no computer, nothing but a landline. He's been having multiple problems with his phone service and he needs that phone as he has quite a few medical problems. He said he talked to them last week and told them that he's certain that they have a lot of really smart people who work for them, technical engineers and so forth, and that what they need to do is to remove them from their skyscraper and put them on a plane and send them to TALLAHASSEE TO DO SOMETHING ABOUT THIS SHIT BECAUSE OBVIOUSLY THE PEOPLE THEY HAVE WORKING HERE DON'T KNOW WHAT THEY'RE DOING!
I thought that was wise and appropriate advice.
And I think that Mr. Moon has acquired the phone number of some upper level Century Link person and he's going to call that individual tomorrow too.
I'm just certain that we'll get this all straightened out (oh sure) and all will be well again. Meanwhile, it took me over an hour to download a new audiobook and I'm not kidding. It really is like having dial-up again without the screeching noise.

I guess that's about all I have to say this evening. Except that I would really like to make it a rule that anyone writing about the Rolling Stones being on tour is no longer allowed to speculate on whether or not this will be their last tour. Okay? They've been doing that since about 1968 and obviously, they're never going to stop touring until one of them dies at which point we'll be aware of the situation.
I will also add that I sincerely doubt that any of them will die before I do and that is fine with me. As I said so many, many years ago here, back even before I had read Keith Richards' memoir Life, that one of the main miracles of the Church of the Batshit Crazy is that he was still alive and playing music.
And it still is although I now realize that the miracle is in him being alive, not the music playing because as long as he draws breath and can hold a guitar he'll be playing music. And conversely, as long as he can play music he'll probably be alive.

Okay. I'll shut up now. Mr. Moon worked outside all day too and we need to eat our supper and get to bed because we're old. Not like fine wine old or Rolling Stones old or pyramids old or any of those types of old but in the way of Lord, I feel old and can't wait to go lay down old.
I am not ashamed of that in the least and why should I be?