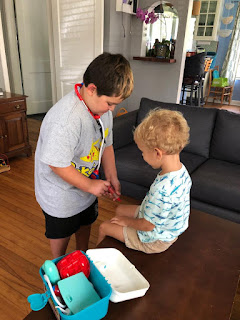 Jessie and her children and Lily and her children were going to come out today for a good-bye pizza party which is why I bought a bunch of frozen pizzas yesterday. It turned out, however, that a repairman was scheduled to be at Jessie's at noon so we all went to her house and I took the pizzas with me for Jessie to bake in her oven. The kids had so much fun. Lily's three love playing with August and Levon and their toys and as you can see, Doctor Gibson was giving August a shot after an exam. Maggie gave me a check-up as well and I have to tell you that even that made me a little anxious although the glasses she was wearing that came with the doctor kit (we all know that all doctors wear glasses because they are all brilliant and brilliant people wear glasses, right?) made her look so dang cute that I almost couldn't stand it. Gibson and Owen are both so good with the younger ones and Maggie is in love with Levon and he loves her. August thinks that Gibson and Owen are the coolest dudes on the planet and the big boys truly appreciate and enjoy his adoration so it all works out very well.
Boppy came by for a short visit and a few pieces of pizza before he left to go fishing. There was a dance party going on for a little while and Gibson was going to show us his Irish Riverdancing style but Owen made a snide remark about how the entire house would shake which led to Gibson hiding as best he could under August's bed.
Here he is being comforted a little later by his mother. 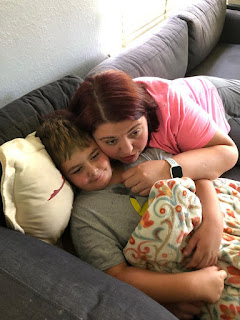 "Your brother's a butt," said Lily. That cheered Gibson up tremendously.
And in the interest of fairness I will add that all brothers can be butts even if they are precious people whose MerMers adore them.

Finally it became apparent that Jessie really needed for us to leave so that she could get things done in preparation for their journey to North Carolina. Lily offered to keep the boys tomorrow which caused huge celebratory cheers from all of the kids except for Levon who was clueless about what that means but he'll have a good time too. Plans were made concerning swimming in the little pool and perhaps nap-taking on Gibson's bed and the menu was discussed. Chicken nuggets will be served, I think.
It was damn hard for me to tear myself away from my youngest daughter and her boys. Levon was happy to give me a kiss and August told me again that he will not forget my name. He also said that yes, he was going to have a wonderful time on the mountain with his other cousins and other grandmother and grandfather but that it would be "more better" if Boppy and I came to visit.
I told him that we would.
What lucky children these boys are to be able to experience the beautiful place where their daddy grew up and all of the love associated with that.
And I know it.
I finally finished saying my good-byes and got in my car and drove to Joanne's Fabrics where I bought a pattern and some fabric to make Maggie two new dresses. 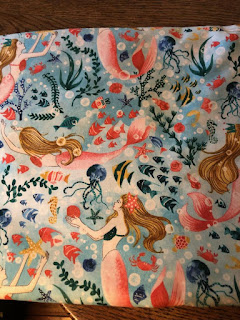 The mermaid material. I think Maggie will like this a lot. 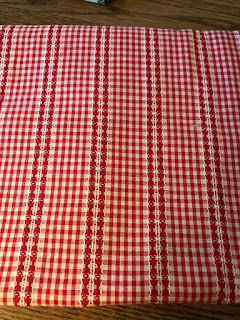 A very soft and breathable sort-of-gingham which frankly, I would like a dress made of. Not as fun as the mermaids but I am sure it will be more comfortable.

I need a project I can do inside because this heat is absolutely intolerable.
I just went out a few moments ago to pick the garden and gather the eggs and even that short of a time out in the heat made me want to smack god in the head. Also, the ant bites I got while going through the cucumber vines didn't help. I feel so sorry for the chickens with all of their feathers. Summer is hard on them and I expect the number of eggs I get to decrease in this heat.
Here's a picture of Darla and the babies who are growing up nicely. 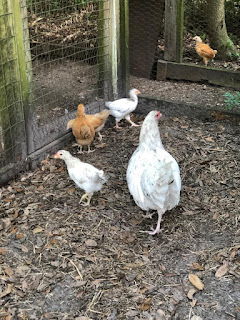 They've been doing fine outside of the coop. Darla hasn't let them get very far away from it in their scratching and exploring. Every day the boundaries get a little tiny bit further out but it's a process. She is such a good mother. Last night, instead of returning to their baby coop to sleep, she ushered them into the hen house to sleep with the rest of the flock. That girl knows what she's doing.

And so. Well. It would appear that we almost went to war last night. If what Trump says is true- that he 86'ed the attack due to not feeling right about killing a possible 150 people for the downing of an unmanned drone, I have to say that it would be the very first thing I've heard which makes him sound like a human being.
But.
I seriously doubt that's the reason. If he had any respect for human life at all, children would not be sleeping under tinfoil in cages on the border.
And then there's the news that E. Jean Carroll has accused the president of raping her back in the nineties which doesn't surprise anyone at all. How incredibly bizarre is it that this story has not been met with absolute stunned shock? Instead it's like, "Oh yeah. Sounds like something Trump would do."
How in the everloving fuck have we gotten here?
This man would not get through the hiring process to be the custodian at a school. And yet- almost half of the voters in this country jumped at the chance to vote for the vile dickwad.

You want to know what is making me smile tonight?
This. 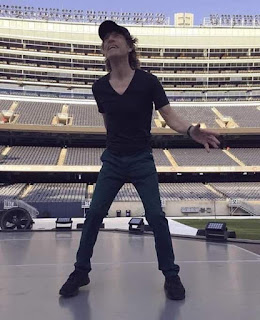 The Stones are going to open their USA tour tonight in Chicago and that's Mick, doing the final walk-through before showtime. Three months ago he had heart surgery. He will be seventy-six years old next month. I bet you anything that Keith Richards cannot wipe the smile off his face as he gets ready to go onstage.
Here's a tiny bit of an interview with my spirit totem animal in the Chicago Tribune:

Q: It’s often said that being in a band is like being married to a bunch of people at the same time. What’s the state of the Stones marriage after 50 years?
A: (Laughs). We’re still deciding who’s Mr. and Mrs.

He also said, "What else would I be doing?" when asked if he'd anticipated doing another tour
in 2019.

Well, I see that copying and pasting has once again changed my whole set-up here so I'll just get on with my life and let you get on with yours.