The Strangest Of Times

I took a walk this morning and it was so damn hot that I truly doubted I would be able to do the last five hundred yards or so to my house. I even crossed the road to walk off of the sidewalk because that side was shadier but it did not help much, not to mention that was I walking in almost knee-high grass which means ticks and possible snakes.
Oh, Florida! Why are you trying to kill me?
Or perhaps more to the point- oh, Mary! Why are you trying to kill yourself?

I got home and doused my face with water over and over and drank deeply of more water and then I took the trash and the recycle and then I met up with Lily and Owen and Gibson and Magnolia June at the Wacissa where I embarrassed my daughter and could easily have gotten into a fight.
Sigh.
When we go to the river we always try to set up under the shade of the big cypress at the edge of the water and so we did today. There was a group of kids right next to us- teenagers- and they seemed lovely and the girls, especially were at that age and place in their lives where they don't even have a clue as to how powerfully beautiful they are. Such perfect skin and hair and lean, strong bodies they had. The boys, as boys that age generally are, were gangly and not nearly caught up to the girls in development but they weren't loud and they sipped grape sodas and swam some and jumped off the rope swing some and I had no problem with them whatsoever. But right where they had laid their towels and where they were hanging out, was a red waterproof speaker wedged between two roots of the cypress tree and very, very loud country music was blasting forth from it.
There was nothing inherently wrong with the music. It's just that when I go to the river or the beach I really don't want to listen to music.  And if I did, I'd wear some damn headphones. They make them wireless and waterproof now, just like this red Jensen speaker was.
I bitched about it to Lily and then I asked one of the girls if it was theirs. She said, "No. It was here when we got here."
I walked around and asked everyone (I thought) there if it belonged to them. Everyone looked as mystified as I was about who the owner was so finally, I just walked over and figured out how to turn it off and did just that.
Heavenly silence ensued with nothing but birdsong and child-calls to break it.
But then...BUT THEN! A guy walked over to it and turned it back on and came over to me and said, "That's mine and I'm here with my wife and kids and we're enjoying ourselves swimming and hanging out and listening to the music."
He didn't look particularly threatening and he was wearing swim trunks and a ball cap with a Florida flag on it which was okay. I mean- it wasn't either a MAGA cap nor did it have a Confederate flag on it. So I said something like, "Well, yeah, but not all of us are here to listen to music. That's why they make headphones."
"Well I've been here all day long," he said, "And it's my right to listen to music."
I knew that I was not going to win any argument with this guy and so I backed right down and said, "Sure, okay," and he walked back to the little picnic pavilion which was not exactly close to where the speaker was and I sat back down in my chair.
"Oh well," I told Lily.
It's funny- even two years ago I doubt I would have done a damn thing about that music. Maybe I feel like no one would hit an old lady or maybe I just don't give a shit about propriety any more but I sincerely was NOT in the mood to listen to anyone else's choice of music.
Eventually, he grabbed the speaker and took it with him up to the pavilion but he made damn sure I realized that it was as loud, if not louder, than ever.
Whatever. What a little dick.
They kept the thing going at full blast until the very second they put in the car when they left and I guess he proved his point but I tell you what- I could feel my whole body relax when they finally took off. Not because they were gone but because I didn't have to listen to the crap that passes for country music anymore.

Besides that, it was a fine day at the river. Owen's goggles recently broke and his mama hasn't had a chance to buy him any new ones so he was pretty put out about that but Gibson did finally share his. Speaking of Gibson- that child will make friends with ANYONE! He literally does not know a stranger. Which is fine if you're right there to make sure that whoever he's talking to is an okay person for him to talk to but Lily's always afraid that he's going to say something inappropriate because the child just WILL say whatever he's thinking which I find charming but which everyone else might not. For example- once Hank brought a friend to the river whom I am sure preferred the "they" pronoun which is something we are quite comfortable and familiar with but Gibson was fascinated.
"Are you a boy or a girl?" he asked with no guile whatsoever. He truly wanted to know.
He not only doesn't pretend not to see differences, he wants to explore the subject of them. Which I think is pretty cool but is probably not always comfortable for the person he's interested in. He's no more afraid to ask a person about their skin color or body shape or age or gender than he is to ask where they're from, despite all of Lily's admonitions to him that differences are no big deal at all.
I love that kid.

I brought a jar of the dill pickles that I'd put in the refrigerator for taste-testing and they got eaten up. 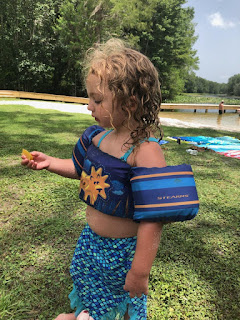 Here's a cute little mermaid enjoying one.
I can't believe I was able to put that picture in. My internet is still fucked up. While we were at the Wacissa a Century Link truck pulled into the parking lot and continued on around the loop of it and I thought, "Goddam it! Go fix my wifi!" There is absolutely NO reason to be in the parking lot of the Wacissa in Jefferson County, Florida unless you are about to make use of the river in one form or another. It's literally at the very end of a very country road.

But. Hey. I do have internet.

What I don't have is my husband back. He was planning on coming home tonight after fishing all day  but he called me and said that he was just too tired and that they needed to clean up the house he's been staying in. He'll get up very early in the morning and drive back here tomorrow and get dressed for work and go on in to the credit union where his office is.
He sounded exhausted and I would much rather have him go to bed early than to drive home so very, very tired.

We just got another minuscule rain shower, not nearly enough to dampen the dirt but it surely did drop the temperature some. I have a very nice photo of a fine pig that I took on my walk this morning, PLUS, another cute picture of Maggie, PLUS, a picture of Darla and some of her chicks but no matter how hard I try I can't post them.
Use your imagination.

So guess what? That latest rape accusation against Trump?
Completely ignored.
Again.
How many women does this make now?
As proof that he did not do what she accused him of he has this to say, "She's not my type."
Well, then. There you go.
I hate that man with the smoldering heat of the surface of the sun.
Which is even hotter than it was in Lloyd today.
Having Donald Trump for a president is like having the man who abused you as your boss. The boss of the job you cannot quit. The boss who lives with you and from whom you cannot escape no matter where in the world you may go.
In other words- a whole lot of us are in a perpetual state of anxiety, fear, revulsion, and disbelief. The very news of every day should require a trigger warning.
And we are doing our best to try to maintain any sort of sanity at all. And it's not easy.

I believe I will now go make some chicken and rice.

Hang in there, babies. Nothing lasts forever.