The Small Things Of Life In The Midst Of It All

Thank you for joining us for our regularly scheduled program and if you missed it, I posted earlier today wherein I gave a vague recipe for tomato pie.
In case you're interested.

As per usual these days, pictures are not making their way from my phone to my laptop and I have a great picture which would explain all if only I could post it. I am going to give it some time and see if it and the others I have sent arrive before midnight.

Picture arrived! Here it is. 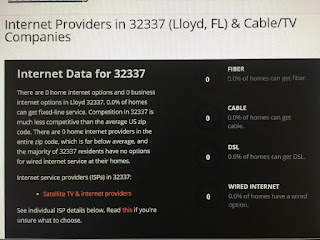 I suppose we're lucky to have internet at all.

I had a very laid-back day today. I have felt much better and am grateful. I did usual things like washing the bedding and hanging it on the line. I talked to Jessie and to August. The first thing he said to me was, "When are you coming to visit?"
Of course I teared up. I do so miss him and his brother.
But the upshot is that Mr. Moon and I have indeed planned our jaunt to North Carolina and we'll be heading up there at the end of July. We're going to stay in an AirBnB for a few days and then we'll move to Vergil's grandma's house where hopefully, other family members from Tallahassee will be joining us. The house is now owned by family as and is rented out usually, but there is a week where it's available and it's a beautiful house and I am looking forward to staying there. It feels good to get that plan made.
Jessie told me that the house where she and Vergil and the boys are staying has a tractor in the front yard and sent me this picture. 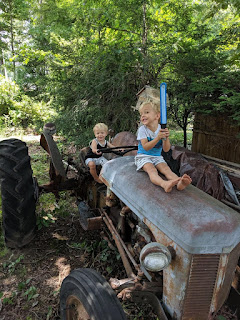 I think they're in heaven.

I went to Publix and shopped for a few things I needed. I came home and got the sheets off the line and made up the bed. I took an old feather pillow of Mr. Moon's and sewed it into a pillowcase because there was a hole in the pillow and the fabric was so rotten that it could not be patched. I think I've got the situation under control now and Mr. Moon will have his pillow back, beloved dust mites and all.

Lily reported that Owen was delivered safely to camp. She posted this picture on Facebook so it's available for me to post here. 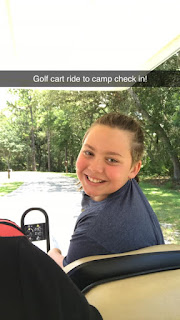 He looks happy and at ease about it all. I wrote him a card and sent it today and hopefully he'll get it before he leaves next week. This being Lloyd, that may or may not happen. I'm so proud of my big boy.

Mr. Moon's birthday is tomorrow and I have started making a dessert that he loves. The recipe came from a cookbook that his former mother-in-law wrote and self-published and I only base my version loosely on it, to say the least. 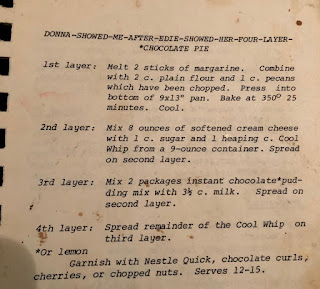 The recipe calls for things like margarine, Cool Whip, and instant chocolate pudding. I of course whip my own cream, use butter, and make my own damn chocolate pudding. Although to be honest I will admit that I would not turn down a bowl of Jello chocolate pudding. Even instant. I sort of love that shit.
As I recall.
Here's what my pudding looks like though. 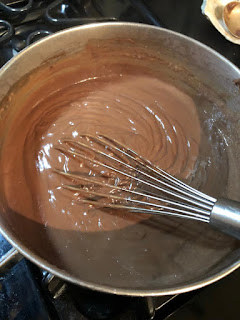 So. I have the crust or first layer done and now the pudding and tomorrow I'll whip that cream and get it all put together. I've probably related this story before but I'll tell it again- I have told my children that if I die before their dad does and if he falls in love with another woman they have my permission to show her this recipe so that if she wants to, she can make it. However, they should not tell her how I make it unless they really like her. Otherwise- just let her use the Cool Whip.
If this ever does happen, I doubt my husband will even notice but that won't be any business of mine at that point because I'll be dead.
One must be pragmatic about these things. 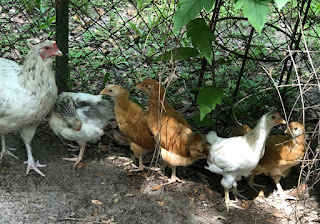 Darla and her five children underneath the passion flower vine.

I can't even bring myself to discuss the heat wave in Europe and how the temperatures are soaring to record-breaking levels. I am so scared that we have completely fucked ourselves and I fear for my grandchildren with what can only be described as terror. And yet, here I am, running my air conditioning, planning a trip in a gas-powered vehicle (well, it's a Prius but it still uses gas), thinking that I can't possibly live without my made-in-China phone that probably sucked more resources in its making and transporting than a Chinese child ever will. Our president (okay, not yours or mine) is in Europe right now but I doubt he'll break a sweat as he won't be exposed to the heat for a minute. He's being all wink-wink-ha-ha with Putin.
"Oh, sweet P! Please do not meddle with our elections. Okay? Thank you. Here's a big old kiss on your ass and let me know if you need me to, oh, you know- get on my knees in front of you for anything. Wouldn't that be a pretty sight?"

I do believe I'm going to fry some green tomatoes this evening. Sure, the planet's on fire but until it actually explodes I suppose I'll just do like most of the rest of us and continue on with my incredibly privileged, sheltered, entitled life, going where I want, using what I want, eating what I want (at least I grew the tomatoes) and bitching about any inconsequential thing that might annoy me.
Tra-la!