I'm Cranky As All Fuck 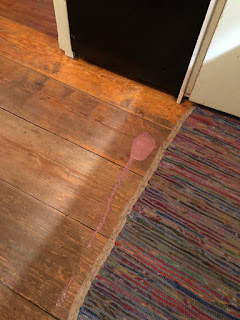 I knew that today was going to suck when I went to pour out what was left of the smoothie this morning and spilled most of it on the floor. That doesn't look like much, does it? But let me tell you this- that shit splashed ALL THE WAY ACROSS THE KITCHEN and up the cabinets on the other side. 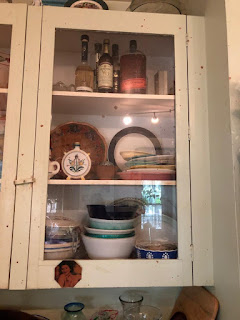 Do you see it way up there at the top of the cabinet?
How did this even happen?
To add injury to insult, it also splashed up my very own personal dress so yes, I had smoothie on my thighs.
I don't even like smoothies. I make one on Sunday, Tuesday, and Thursday nights though, all except for the blending part, to leave in the refrigerator for my husband to have before he works out on Mondays, Wednesdays, and Fridays. They have fruit and yogurt and almonds in them. With prunes to make them sweet and add fiber. I'm to the point where I really can't handle sweet things for breakfast. I'd rather have a toasted cheese with tomato on it or a burrito with an egg and salsa in it. But I always make too much smoothie for one person and so of course I feel as if I must finish what's left in the blender jar in order not to waste it and this morning things just went awry.
And please don't offer me suggestions on other things to make smoothies out of. I'm not in the mood. I'm afraid that if someone just said the word "kale" I might fucking lose it entirely. Even the word "green" might make me throw something. 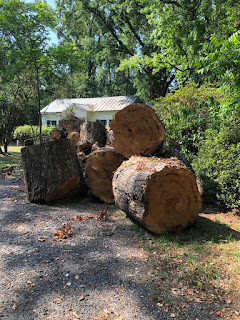 That's an oak tree that was cut down and cut up in the front of the old Lloyd Woman's Club. You can look it up. It's on the National Register of Historic Places. They don't do Woman's Club stuff there anymore, though. Now they just have AA meetings.
Good to know, right?
That tree was huge. I know you can't really get the scale from the picture but I think you could build half a house from it.

So. I spent the rest of the day, mostly, looking at AirBnB and VRBO listings for Nashville.
There are about six hundred of them.
Really.
Out of all of them I found ZERO places I wanted to stay.
This probably says more about me than it does about the listings on AirBnB and VRBO for Nashville.
I also looked at hotels. Well, hotels online.
How many goddam Marriott's and Wyndham's and Hilton's can one city have?
Oh, you would be surprised.
Of course there are also non-chain hotels. "Boutique" hotels we call them now.
I just can't.
I don't know what's wrong with me.
And we're only going to be there for one night so it seems ridiculous to get anything too expensive or groovy. We won't have time to get into the whole vibe of it. Or use up all of the toiletries. We're also going to spend a night in Birmingham, Alabama so that we can break the trip up there into two days.
So I finally gave up.

And that's what sort of day it's been. 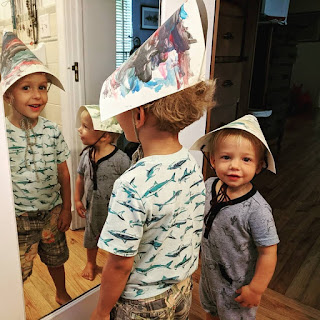 I stole these pictures from Facebook where Jessie had posted them. She reports that August finally feels good enough to get his goofiness back and they made hats today. 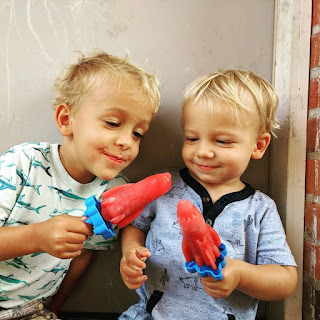 Mama made them rocket pops. 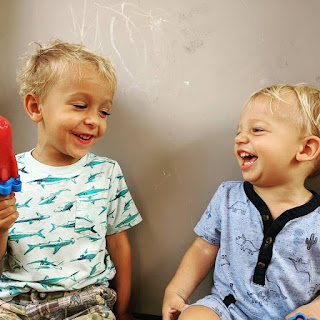 As you can tell, Levon never lost his goofiness.
Aren't they fine looking lads? I think so but of course I'm their grandmother.

Here's another good thing- I've been listening to "Theft By Finding: Diaries 1977-2002" by David Sedaris on and off all day long. I love it. He was born a writer. I don't care what was going on in his life- abject poverty, meth, cocaine, family stuff, homophobia or just general living-in-the-south crap- he could make his daily visits to the ihop sing like tension wires in a windstorm.
I'm being blown away, basically.

I'll end this here because there's no need for me to go any further.

It's supposed to rain tomorrow. And not even get up to ninety degrees.