Big Little Stuff Of All Sorts 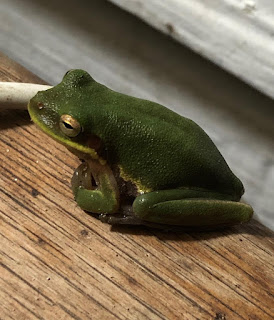 That's a pretty little frog who came to keep me company on the porch last night. Actually, he was sitting there to catch the bugs that dart about, drawn to the lamplight. I love his golden eye shadow. How lovely he is in his frog perfection!

It's been a nice day. I went into town pretty early to hang out with Levon and August and we had a good time. It is so fun, getting closer to Levon, getting to know him a little better as he feels more secure without his mama or his daddy within arm's reach. He's a funny little guy, easy to laugh and learning so much every day. 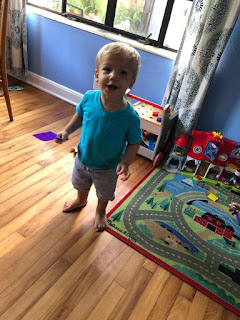 Here he is with his shovel. He can say the word shovel quite plainly and sometimes does but mostly he calls it his "fa-fa." I have no idea why although I did suggest to Jessie today that "Fa-Fa" is the actual given name of the shovel. Like, he's a boy but his name is Levon. He's holding a shovel but its name is Fa-Fa.
Who knows?
Not me.
I do know that he worships his Auggie, as all small brothers do with their big brothers. August doesn't take too much advantage of this but I will tell you that they sometimes tussle like puppies. August ran his bike over Levon's feet today and I know he did that on purpose but Levon didn't really cry. He stuck that lower lip out and I thought he might cry but I whisked him off to change his diaper and August went to the freezer and got the little kitty-cat freezer pack to put on boo-boos and before we knew it, we were all laughing as I would hold the cold thing against their feet or legs or hands for a second or two and then shudder and say, "COLD!" with all of my dramatic powers and then snatch the kitty away which sent both boys into fits of giggles and Levon would hold his little foot out and say, "More," and I would do it some more.
We read books and then August wanted a bagel so I got out the bagels and he instructed me on how to prepare them; to cut them and then to put them into the toaster, which he pointed out, and he got the cream cheese from the refrigerator and tossed it up onto the counter. 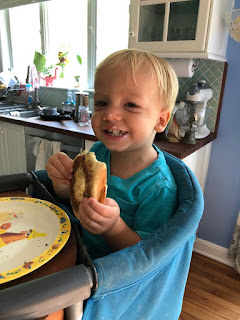 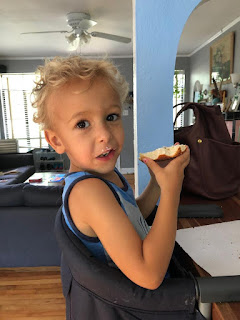 They ate every bite so I guess I prepared them properly.

When Mama got home we went outside to cut a few zinnias for me to take home. 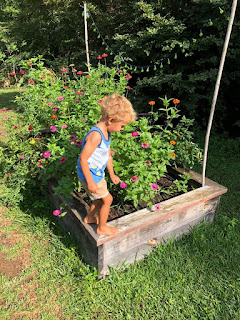 Jessie is definitely the boss of me when it comes to growing zinnias. I just weeded mine a few minutes ago and their stems are about the size of human hair and they only have about four leaves apiece.
Sigh.
She has a whole other raised bed box full of them along with tomatoes and herbs. Levon picked quite a few cherry tomatoes and handed them over. Some of them were actually ripe. He's a very generous little soul.

And then I went to Publix and then I came home and took the trash and recycle where the racist old Jesus-lovin' man was on duty. He and I pretended we didn't see each other.

Mr. Moon is headed to the coast because he and some friends are getting up early, early to go fish for snapper and please, dear Neptune, let them catch a few. The one thing we ate at that restaurant in Birmingham which was truly delicious was a ceviche with red snapper. It was an appetizer portion and so course, that being a very, very fancy dining establishment, came in a dish about the size of my palm but I have to say that it was just about worth the price. After we'd eaten the approximately six slivers of snapper, I am not ashamed to say that I ate the lettuce leaf that was underneath the fish and THEN drank the remaining liquid. I'm not sure what made it taste so good. It's almost as if it had lemon in it instead of lime and I HATE the term "popped" when it comes to either color or food but whatever it was, it made that ceviche pop.
Of course, I'm used to a serving of ceviche which looks like this. 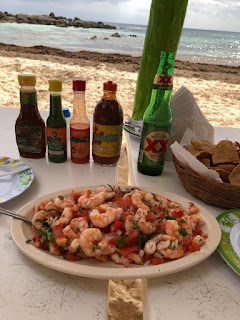 That is the shrimp ceviche we get at Chen Rio, a beach bar and restaurant on the east side of Cozumel and it comes with guacamole and chips and we also order the fried red snapper which is the best red snapper in the entire world so those tiny slivers of snapper ceviche were just a mean tease to me but I did enjoy them for their deliciousness.
Where in hell was I going with this?
Oh yeah. Maybe if Mr. Moon brings home some snapper I'll make us a little bit of ceviche with it and see if I can replicate what we ate last Friday night. I probably won't be able to but it'll still be good.

Lily and Jessie and I are talking about taking a little trip to Panacea, Florida tomorrow to visit the Gulf Specimens Marine Lab.
Jessie's not sure she wants to expose Lily's children to whatever it is that Levon has but I think he'll be fine and so will they. His eyes already look much better and although he was running a bit of a fever today, I am of the optimistic opinion that whatever he has won't be a threat to Owen and Gibson and Maggie.
I say this not as a nurse but as Pollyanna Grandmother.
Anyway, I love going to the Gulf Specimens Marine Lab. So many sea creatures to see close up and some of them you can even touch. And the larger sea creatures are there because they're being rehabbed so I don't feel guilty about them being there. Sharks and rays and octopi and injured sea turtles that fishermen find and bring to the lab to be taken care of. When I used to rent that tiny block apartment on St. George Island, Lily and Jessie and I visited there regularly on our drives to and from the island.

And so I have the house to myself tonight. I can't watch any of "Big Little Lies" which is what Glen and I have been watching because it wouldn't be fair to get ahead of my husband. I read the book a few months ago and I didn't think I'd like the series but damn. I do. As with all of these things I got hooked and drawn in. There's something completely eerily beautiful about the setting where everything takes place which is Monterey. The book was set in Australia (the author is Australian) but they've made it work in this California location. And no matter how much I do not want to like Nicole Kidman I have to bow down to her performance in this series. And Reese Witherspoon, too. The casting is perfect. Zoe Kravitz is a jewel in her role. She shines like the goddess she is. Laura Dern is now my very favorite villainess ever. Oh GOD! how I hate her. And Shailene Woodley, the actor who plays the pivotal role of a young mother whose son is accused by Laura Dern's character of harming her daughter, is scary-good.
It's all about the women!
Except for when it's about the men and that, of course, is where the trouble comes in.

Here's a picture of Dottie posing by a pot of hydrangea. 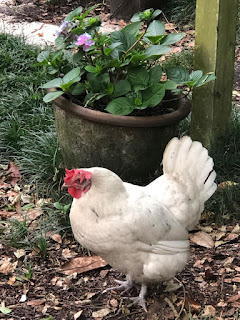 I think she misses the company of her sister, Darla, who is busy raising babies. 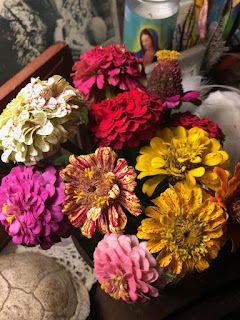 Is there any flower happier than a zinnia?
I don't think so.

Feel free to correct me if I'm wrong. I frequently am.