And So Another Day

Deadwood: The Movie was amazing. It was everything I wanted it to be and better than I had hoped it would be.
And that is so rare.
It's been thirteen years since the series ended and I swear, I would have bet that it had only been something like five or six. That's how real those characters are to me- they have continued to live on in my head.
David Milch, the man who created the series and who wrote most of the episodes, has been diagnosed with Alzheimer's and so I suppose that he realized that it was now or never to make this movie which had been discussed and desired for so long. And he made it. Rolling Stone did an article about it called "Deadwood: The Movie, A Proper Fuckin' Farewell For TV's Unfinished Masterpiece."
That about sums it up.
And do NOT read that piece until you've seen the movie because it's full of spoilers but it sure was a pleasure for me to read today after I'd seen it.
A lot of the joy of watching it came in seeing those characters who have always been so very real and present, back on the screen, picking up where they'd left off, which in the movie was ten years time, not thirteen, and obviously loving every moment of it.
Here's my favorite line in the whole thing and it was spoken by Trixie, a former whore who was about to have her long-time lover's child and what she said she was feeling was, "...awash in the miracle of a whore my vintage being pregnant at all."
Oh, the richness!

And then perhaps start the whole series again and watch from beginning to end.

So that was good and I woke up this morning still awash myself in the miracle of an excellent story performed by the finest actors and although that has stayed with me all day long, I have felt stuck in my slough. I did the things I usually do which was a bit of housework, scrubbing those toilets and folding those clothes and sweeping that bedroom. I worked in the yard, pulling more croscomia, trimming wisteria, yanking out the inaptly named glory bower. I did this until I couldn't do it anymore. I was hot and my joints were screaming at me and I came in and took a shower and started in on supper.
I have got to figure out a way to allow myself to enjoy this life of mine more. All of the elements are in place but I somehow don't feel capable or maybe it's more a sense of not deserving to enjoy myself. A long time ago after years of being a stay-at-home mother and feeling great guilt for not being out there and earning money (or not much, at least- I usually had some little part-time side gig) I think I just decided to stop spending money on anything that wasn't really absolutely necessary and that eventually became my habit. I know this isn't the whole entire deal but it's part of it. And I need to stop it.
If I want to go rent a house at the beach, I need to just do it. It won't break the bank. Well, unless I rent one of those monstrosities with eight bedrooms and a pool.
Which I could never do.
Unless I won some huge lottery.
Which will never happen because I've never bought a ticket and do not intend to.
But it's more and less than the money thing. I can't even seem to allow myself to spend time laying on a couch and reading. Why do I feel as if I must constantly be doing something either vaguely or extremely physically challenging?
Why, as a therapist once asked me, do I have this need to suffer?

Fuck if I know but I'm sure there's a good reason.

On my deathbed, will I be thinking of how proud I am of all the yard work I've done in my life? All the weeds I've pulled, all the toilets I've scrubbed, all the miles I've walked?
Probably not.
But I probably will be thinking that dammit, I never did get the kitchen floor mopped that week and NOW who's going to do it?

Okay. I've got to figure this out. I have to. I'm at the age where there is no option but to make the best of it while I still can.

Meanwhile, I hear that August has some sort of cold with a fever and that makes me so sad. I talked to Jessie on the phone this morning and Levon was in the background demanding "HOLDY!" which meant that he wanted to hold the phone himself and when I told him I loved him he said, "Yuv you," in return.
And Lily sent me this picture. 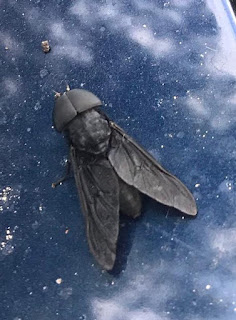 "Goth horsefly?" she asked.
Good GOD! I've never seen anything like that in my life. Do you see the face on its back? Of course that's an illusion, an example of pareidolia.
Unless it's not and that damn insect is a member of the advance party for some sort of death aliens.

On we go.
And at least a small part of my backyard is now a bit more tamed and civilized.
Can't wait to see what I accomplish tomorrow. If I can get out of bed in the morning, that is.
I hope for the best.