Come On, Rain! Quit Toying With Me 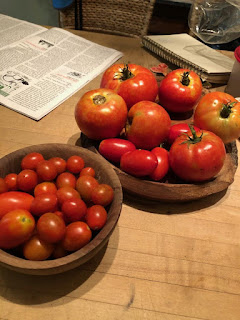 I believe it may be just about time to make a tomato pie. Either that or a big ol' pile of bacon and tomato sandwiches. I leave out the lettuce because what purpose does it serve? Merely to dilute the sturdy, salty, perfect flavors of tomato and bacon and who needs that?
Not me.
Maybe a little arugula would be good though. Arugula adds rather than takes away as far as I'm concerned. Which reminds me- I need to plant another row of that peppery green. I just pulled up a gone-to-seed and bug-eaten row a few days ago.
I can't even remember the last bacon and tomato sandwich I had. I also can't remember the last time we grew such pretty tomatoes. This two things may well be related.

Another day in Lloyd. It's been in the mid to upper nineties all day long and you would think that I'd have had the sense to stay inside and make Maggie's dresses but no. Not me! I decided to clean up and trim back the camellia bed but it's in the shade so it wasn't so bad. I pulled or cut enough to fill up the garden cart three times. Mr. Moon is going to have to get to that burn pile soon. It's about a quarter of an acre across at this point. I did get the mermaid fabric cut out for one dress and the old Singer set up so I can start sewing tomorrow if I find the time.
That's sort of supposed to be funny and also sort of not funny because it does seem as if my days get filled up pretty quickly. I may not do a lot but I manage to keep busy.
One of the things I did today was try to figure out what was going on with my dishwasher. It was giving me error messages and not draining properly. This generally means that food debris has gotten in the drain part of the machine so I dug around in that (pleasant task) and discovered this just hanging out: 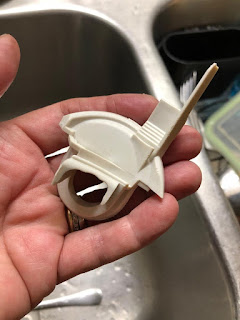 It took me a great and concerted effort to try and figure out where the mysterious object belonged but I finally did and was able to fit it back into place with a satisfying click and then ran a rinse cycle and it did drain so maybe I've fixed it.
If so, Ripley's Believe It Or Not does need to be alerted.

I have heard from Jessie and they made it all the way to Black Mountain, North Carolina. Hurray! She said the boys did great. I bet they're so happy to be there.
I've also heard from Mr. Moon. They had another full day of fishing and everyone caught their limit of snapper for the third day in a row.
We are going to be eating some fish with our tomatoes!

Darla is taking her children farther afield every day. This afternoon she brought them up almost all the way to the back steps. They seem to be growing at an accelerated rate. I am not sure if this is true or merely an illusion. But they are certainly healthy and robust small beings and it does tickle me to see them all in a nesting box at night with their mother. I do not think that this particular brood is all roosters but only time will tell.

And that's my world today. I've been listening to some decent books in the past few days which I had about given up hope for. Seems like I've heard about every book on one of the apps my library uses for audio books but I found a different one that has a few new choices and one of the books I had on hold came through so I've felt rich in that regard. One of the books was Allison Pearson's "How Hard Can It Be?" She's the same author who wrote "I Don't Know How She Does It" which was hugely popular in the chick-lit world. I hate that term.
How degrading!
As if the problems and joys and experiences of women and mothers in the modern world are less important or "literary" than those experienced by men.
Oh please.
I'm sick and tired of reading books by male authors that are supposedly just absolute literary treasures but that leave me cold and unsatisfied. I'm certainly not saying that all books written by men are not worth my time. That would be ridiculous. But give me a book wherein a woman talks honestly about how incredibly difficult it is for a woman who is going through menopause to be raising children whose hormones are just beginning to rage within them while dealing at the same with parents and their health and also, oh yes, perhaps a job where due to her age she is considered to be elderly and of absolutely no consequence, and who is of course trying to keep a marriage on track and I will give you a resounding WELL DONE and THANK YOU VERY MUCH!
Did that sentence make sense?
Probably not.
I shall blame my hormones or lack thereof.
Anyway, I really enjoyed listening to that book even though the ending was a bit fairy-tale-ish. Although- what's wrong with believing that there can be light at the end of the tunnel and also life at the end of menopause?

I started today to listen to the book I'd had on hold which is James Lee Burke's "New Iberia Blues". Speaking of male authors.
I have a long and complicated relationship with Mr. Burke. His books often delve into the deepest and meanest part of the human psyche and there are so many memories and flashbacks of war and of violence but his sense of place and the way he describes Louisiana never fail to give me pause. And many of his books, this one included, are narrated by Will Patton who seems to capture perfectly the heat and the humidity, the fecundity, evil, and  angelic weariness of Burke's landscapes.
He addresses racism and misogyny, addiction, religion, friendship, love, loss, guilt, violence, evil, goodness and the cuisine of Louisiana.
So yeah- definitely worth listening to in my opinion. Sometimes I get a little lost as to who is who and what their place in the story is as I concentrate on whatever task it is I am doing or if my thoughts fly elsewhere for a few moments but I can always go back and restart a chapter.
Audio books are a huge part of my life and I like listening to podcasts as well.
Another thing about my phone I cherish.

Thunder is rumbling off towards the west and occasionally a surprising breath of cooler air makes itself felt. The radar would seem to indicate that a tiny storm system is approaching and I will be so happy if that turns into a bit of rain here. We're not dry by any means. Not suffering from drought at all but you know me- I consider water falling from the sky to be a blessing from the gods. Unless a hurricane is involved.

Well. We shall see. All will be revealed. And so on and so forth.