Wild Things In A World Of Domesticity

Oh, god. I am worn out. I couldn't sleep for about a third of the night due to anxiety-fretting about not having the house/cats/chicken-sitting covered while we're gone and meanwhile, we're leaving in one week. Also, I knew I had a check up at the GYN's today in order to get my bio-identical hormones refilled for another whatever length of time. So. Yeah. Anxiety through the roof.
I got up and whined to Lily and Jessie via text and then I went on a good walk which is the smartest thing I could have done. And look what I saw! 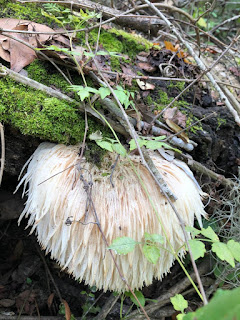 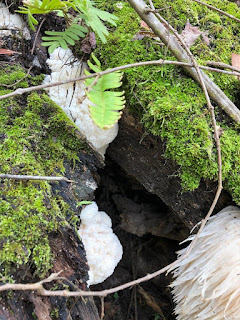 Never in my life have I seen mushrooms like this. I believe they are Lion's Mane mushrooms or, perhaps Bear Head mushrooms. Either way, they are fascinating to look at. I was so glad to have seen them.

I cleaned the hen house and I got ready to go to town for the appointment which of course involved leg-shaving and thoroughly hygienic cleansing. You ladies all know what I mean. I got there ten minutes early and wasn't called in until forty-five minutes after my appointment time. This gave me plenty of time to strew and fret and worry but when I finally got back into the exam room, it didn't take very long and I have to admit that the doctor was truly, truly nice. We discussed Cozumel because when he asked me what my holiday plans were (and you have to talk about something when someone's down there, fiddling with your most sacred parts or up here, giving the old and also sacred bosoms their exam) and I told him I was going to Cozumel he told me that he and his wife had gone there on their honeymoon thirty one years ago- the same exact year that Mr. Moon and I visited for the first time. So that was a pleasant little connection and before I knew it, he was done and I was out of there but of course now I'm in the post-exam-anxiety crash phase and feel as if I could sleep for a week.

I witnessed something else I've never seen today. Three of my young birds were going at it in a way that reminded me of nothing so much as a cock fight. Neck feathers were ruffled and pecking was happening and wings were being stretched. After awhile, one of the birds lost interest but the other two- one a yellow one, one a brown one- kept it up for at least twenty minutes, moving down to the hen house area and the last I saw of them before they went to roost, the brown one was chasing the yellow one through the woods. So, I reckon I have at least three roosters out of that little brood of eight.
Ooh boy.
I really cannot complain about this. The odds are good that at least half of them are males. But I really do not need or want more roosters. The two I have now get along beautifully but have split the flock at roosting time. I honestly think that Ringo and his ladies and Dearie are indeed jungle fowl and a friend sent me a very interesting article about those very birds.
My favorite quote in it is this:

"The domestic chicken is descended from the red jungle fowl, which is native to tropical South East Asia. The bird was first domesticated around 8,000 years ago, and rapidly spread around the world, to be used for meat and eggs."

Although Ringo does not have all of the characteristics of the red jungle fowl, he has enough to be a close first cousin and as such, I do believe that he has all of the wild and wily characteristics of his very distant relatives and also displays the reasons they were able to be domesticated.
I have a deep affection for all of these strange birds, especially Dearie as I have watched her brood and hatch and raise her chicks. She let the boys do what boy birds have to do today but kept a wary eye on them. One of the things I found so interesting about their tussling was how they demonstrated what in human boxers is called "clinching" when they seemed to take a period of rest, but with their necks instead of arms wrapped around each other for a few seconds before one of them would begin fighting again.
I wonder if the dinosaurs which are an even far more ancient ancestor of the chicken fought like this too. Can you imagine humans using the same techniques and strategies to fight that dinosaurs did?
I can.

Well. Enough of my theories and musings.

It's going to rain again tonight.

May all chickens, jungle fowl related or not be safe wherever it is they decide to spend their night.

And all of us too, we pathetic humans who have no fur or feathers, no claws or talons, no beaks or wings but do certainly have the ability to build and create shelters and weapons and libraries and art  and invent pap smears.
And brains with which to wonder about how all of it came to this and where in the world it is all leading. We laugh about how children go through the "why" stage, asking why in every situation, but if we are honest, and if we are curious, we never grow out of it which is one of my favorite things about people.