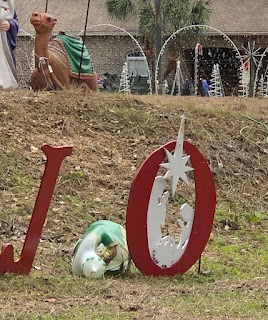 It would appear on first glance that one of the wise men dipped into the sacred wine a bit too freely but if you look at the expression on the camel's face, it might be that the animal, resenting his long trip across the desert with a guy on his back, kicked him while he was down.
Who knows?
Magi Guy is obviously out of commission and the camel ain't talking.

Oh, the things I see on my walk.

Have any of y'all listened to the NPR podcast "Believed"?
It's about the Larry Nassar case. He's the guy who sexually abused/assaulted hundreds (if not thousands) of girls who were his patients, many of them gymnasts. At one point he was a team doctor on the USA Olympic Committee and was also employed by the University of Michigan and an organization called USA Gymnastics.
Unbelievably, Nassar got away with his evilness for decades EVEN THOUGH HE WAS REPORTED FOR YEARS!
He was so well-respected and had such a reputation for being able to "fix" bodies that he would literally respond to some of these accusations by taking a power point presentation into the police who were questioning him which (according to him) demonstrated what he did in his work and how it could have been misconstrued as being inappropriate which it CERTAINLY WAS NOT, NOT EVER, EVER, EVER! NO WAY! NO HOW!
And the police bought it. And the institutions who employed him covered up, destroyed documents, defended him, and ignored the women and their parents who made the accusations.
The crazy, most insane thing about all of this is that much of this abuse happened while parents were actually in the room while these treatments were happening.
This man would use his own body to block the parent's view of what he was doing and the girls trusted him so much that even if they knew that what he was doing felt wrong, they never said a word. Or else they were so shocked that they couldn't speak.
Or else, they did not think that if they told anyone they would be... believed.
And they weren't. Even if they told their parents and their parents went to the police, Nassar's reputation was so sterling and his defenses made so much sense, that he was released, over and over again.
It's just a sickening and heart-rending story but he was eventually arrested and convicted and sentenced to 40-175 years in prison and the judge, a woman named Rosemarie Aquilina allowed every victim that wanted to, to come and address Nassar personally in court after his sentencing.
It took seven days for the more than 150 girls and women to testify about how this one man had affected them and their lives.
And now the organizations and institutions for whom he worked are being investigated and the shameful truth is coming out- that he was protected by them even as he abused more and more girls.
The shit has hit the fan and the mess is going to contaminate the reputations of these organizations for years to come and let's not even talk about the lawsuits that are probably going to arise.

There are so many things I could say about this situation, about how it's merely a monstrous magnification of how abusers get away with what they do. I doubt I have anything new to add to the conversation, as we say so glibly, as if we could simply converse our way into understanding and perhaps some sort of resolution.
I don't think that we, as a society, have begun to scratch the surface of the reasons that sexual abuse of all kinds still exists so persistently in our society. We don't understand the basis of why abusers abuse or why girls and women (and little boys and men, too) feel so powerless to report, to confront. We do know that when it occurs, the effect it has on the victims is life-long and poisonous, sometimes fatal as those victims are more prone to suicide or behaviors which are unhealthy.
We also know that it is incredibly common and that abusers are so very often trusted and are even respected and revered members of society, which makes it all the more difficult for them to be reported or arrested.
And I don't have any answers and I don't have any solutions and I wish I did.

Well. That's one of the things I've been thinking about today as I've gone about my chores and my life.
It makes me so sorrowful and so angry to know that even when victims do come forth and tell someone, whether they be young or older, that they are so often not believed. Or even if they are believed, told that, well, what happened to you wasn't so bad. Or...it was your fault. Or made to understand that one man's reputation and the good that he may do is more important than the harm he did to a child.
There is nothing more important than dealing with the harm an adult may do to a child.
Nothing.

And I'll say one more thing about this- anyone who protects an abuser in any way, be it a parent, a teacher, a church member, an organization, an officer of the law, a co-worker, or a friend or mother or father- is as guilty of evil as the abuser.

Back to our regular programming tomorrow, most likely.