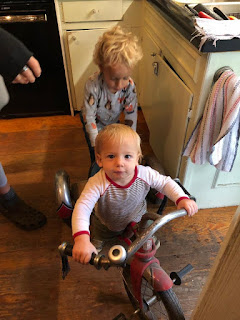 I invited the grandchildren over for pancakes this morning and they all showed up with their moms in tow. I hadn't cooked for anyone in at least two days so I guess I needed to make sure that I still had my skills.
It was so much fun. There's just something about watching all of the cousins interact that makes my heart happy. And I love to feed the people I love. That's just how it is.
I made pancakes and bacon galore and cooked eggs with potatoes and peppers and onions and mushrooms and asparagus and broccoli and we feasted. There was not one pancake nor piece of bacon left when it was all over and only a tiny bite of the eggs. Maggie was the only one of the kids to eat some of those. She does love her eggs. 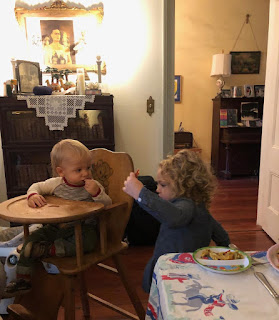 Maggie sharing her breakfast with Levon. 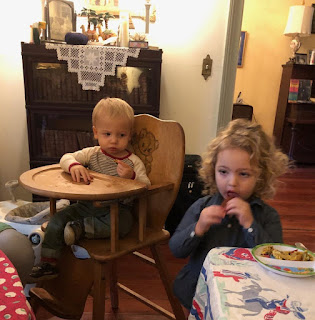 I have no idea why Levon was giving her that look but it's rather adorable. She's so good with him. She alerts Jessie to tell her if Levon is doing something she thinks might be dangerous and he was playing with a fork and she took it away from him. She was born with a protecting and nurturing soul and that's all there is to it.
So was Owen. He carries that little boy around and watches out for him. He's going to be such an awesome dad someday and I know a lot of that comes from watching how his own daddy is with him and his siblings. Jason is as tender and caring and diaper-changing and outfit-picking-out as any mama could be. I admire that in him so much.
Gibson was into being in videos today. I must have made four of them myself. And at the end of them he says, 'Don't forget to like and subscribe to my videos at Gibson dot com!"
Of course that little bit of internet property is already held by the Gibson guitar company but the kid has his eye on the future.

Owen wanted Aunt Jessie to braid his hair and so she did. We all gave our rousing approval and admiration and I showed him pictures of Snoop Dogg in braids. Owen had no idea who Snoop Dogg was but we assured him that he's just about the coolest guy in the world.
"Plus he's friends with Martha Stewart!" I told him.
"I have no idea who that is," he said.
I didn't even try to explain. 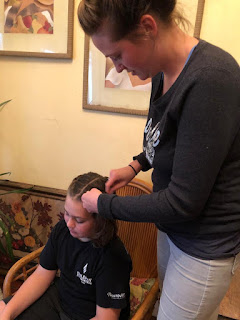 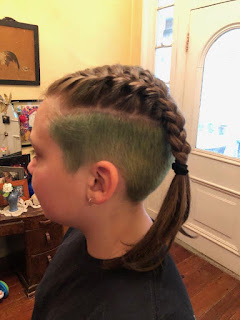 Owen is NOT afraid to be a trend-setter.
Lord, I love that child.

August was in a cheerful mood. He brought the Rudolph stuffed animal that the guy at the thrift store gave him and his mother had put a battery in the thing so that his nose lights up and he plays music. August is absolutely enamored of it. He showed it to me as soon as I opened the car door to help him out of his seat.
"You smell yummy," he said.
I had just sliced an onion.
He ate four pancakes and one and a half pieces of bacon. I have never in my life seen such a small person able to eat so much. 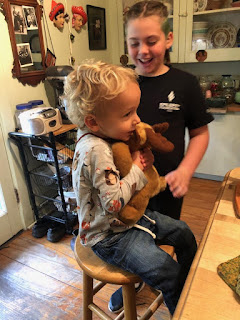 Levon is walking better every day. 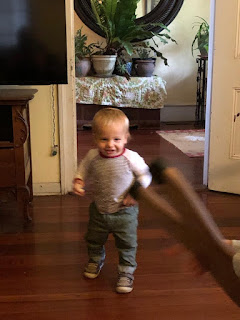 He toddles after the big kids and wants to do whatever they're doing. This is pretty fine until they go up the stairs. I walked right behind him about halfway up today, holding on to his britches and then I picked him up and took him back down and tried to redirect him.
Redirecting toddlers is not easy.

It was, of course, complete chaos while they were here. Three adults, five children- you'd think it would be easy to keep track of all the kids, especially with Owen's help. But no, it's not.
"Where's Maggie?"
"Where's Levon?"
"What's August doing?"
And so forth.
I am very proud to say that we did not lose any of them. Not a one. 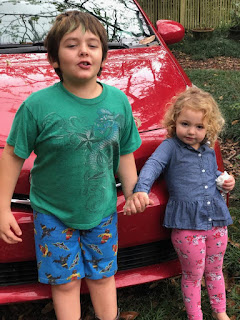 After they'd all packed up and gotten into their cars (and Maggie can actually buckle herself into her car seat and tighten the straps by herself) and I'd kissed them all and told them I loved them I walked back into the house which was pretty much destroyed.
Jessie and Lily had offered to clean up but I told them that I didn't have one darn thing I had to do for the rest of the day and that I'd be happy to do it myself.
The girls, realizing that it would probably be easier for me to clean up than to deal with their children while they cleaned up wisely allowed me to do it.
So I slowly made order from the chaos and and tidied and swept and put dishes in the dishwasher (have I told you lately how much I love my dishwasher?) and did some laundry and then I did the Sunday crossword in the local paper which is easier than the Monday crossword in the NYT's and enjoyed my solitude and my house.
I love being the kind of grandmother who has toys and books everywhere, who has a house that welcomes five children playing with their favorite things and floors that don't matter when syrupy pancakes get dropped on them and a high chair for the youngest to sit in and a hallway and kitchen that invites little ones to drive a tricycle through. I love that my grandchildren each have their favorite cups and plates and know where everything is and how everything works and yes, I even love how they all know how to push my buttons and they're all the boss of me and they are loving and kind and funny and smart and beautiful and curious and they know how much I love them and they love me back.
And sometimes, they even listen to me.

After I'd tidied up, I picked a few camellias to put in the hallway. 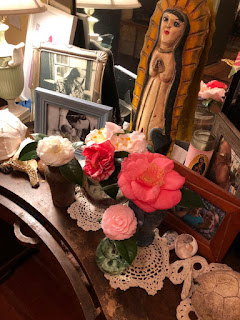 Do you see my favorite? The Pink Perfection? 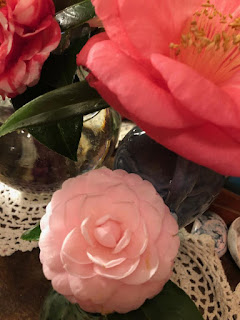 Is it not a glory?

And so it's been a most excellent Sunday although I'm a bit disturbed because three of the jungle fowl did not make it into the roost tonight. Ringo and Viv and Vera are out there somewhere I guess, in the cold drizzling rain. Perhaps they have decided to make their own flockette and when that happens, there ain't much I can do about it. I'm going to try not to worry. One of the Viv/Veras spent the night outside last night and she's probably talked the other two into establishing their independence although I am not sure why. I certainly haven't seen much disagreement between Ringo and his brother-husband, Liberace, and indeed they have slept in the same nest box forever.
At least Dearie and her brood are safely in the hen house, cozy in their own private nest.

I'm going to go make some risotto. And then I plan to eat it.